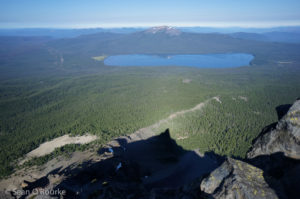 Mount Thielsen first came to my attention in 2012 when, while being a tourist at Crater Lake, I spied an impressive rock spike to the north. Unlike most of its volcanic brethren, which are mounds or symmetric cones, Thielsen has been worn down to a single pinnacle, with the only easy access from the west. An official trail leads from near Diamond Lake to within a mile of the summit. Beyond there, a good climber’s trail leads to the short class 3-4 summit scramble. 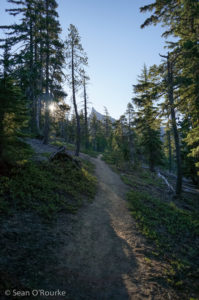 I like to break up my “commutes” between mountain ranges by tagging loner peaks in the drive-through states like Oregon and Nevada. Most of Oregon is endless green blah, but there are enough volcanoes to keep me busy for a few more trips. I was coming off two hard-ish days, and needed to do some chores in town, so Thielsen was a perfect camping spot and morning peak. 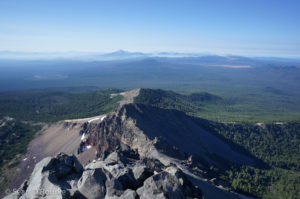 Not needing all the available daylight, I read and enjoyed a mug of hot coffee, then started up the trail a bit after 7:00. It was nice not to be trying for speed or needing to cover ground quickly, and I enjoyed the Sierra-like feel of the cool, dry morning air. The trail climbs gradually until it crosses the PCT, then becomes rougher and steeper as it joins Thielsen’s west ridge. 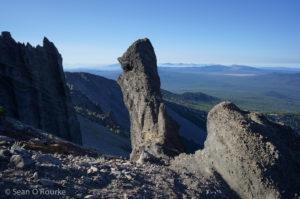 The route continues to become steeper as the rock improves, with the final 100 feet a fourth class scramble up the southeast face of the summit pyramid. At its base, I passed my neighbor in the parking lot the night before, an older woman who seemed to be a Thielsen regular, out for her constitutional and in no hurry. The scramble was fun and surprisingly solid, and the view down the sheer east face was impressive (there is even a 5.8 nightmare choss route on it, probably put up by refugees from the Canadian Rockies). I scrambled and jogged back to the parking lot, now filling up with day-hikers, then continued south. 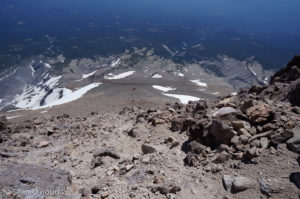 It’s hard to miss Shasta when coming at the Sierra from the north, and I had an extra day, so I decided to check out the Clear Creek route, the one completely snow-free way up the mountain. It turns out to be a grind, with most of the time spent on a broad 5500′ slope above a popular camping area. However, the volcanic rubble is better-behaved than on Jefferson, and there is usually a decent trail to follow. I passed a couple people-herds heading down from camp (why?) with ice axes (why?!), but amazingly had the whole upper mountain to myself. Though the register suggested there was plenty of traffic, I saw no one on the summit or the upper Avalanche Gulch route while I hung out around mid-day. The climb was a slog, but most of the descent was a breeze, with a mixture of scree-ing and boot-skiing the soft snow-patches. I even had the trailhead to myself as I ate my mid-afternoon post-hike meal. Strange.