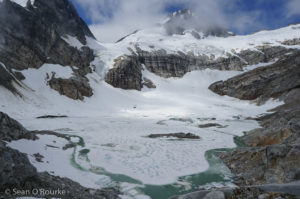 Primus Peak is a rubble-pile on the eastern end of one of the largest glaciated regions in the North Cascade, which extends west to Eldorado. A tour coming in the Eldorado side and out Thunder Creek is popular among both climbers and skiers. While the west-side access is much shorter and more popular, the east-side route is reasonable, with about 6 miles on-trail and a faint but usable climbers’ trail up the ridge to the base of the Borealis Glacier. I had planned to tag neighboring Austera and possibly Tricouni as well, but ended up just doing Primus. 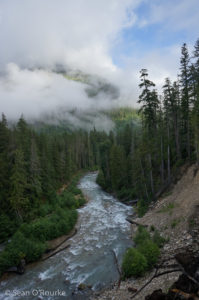 After one rest day due to fatigue, and another due to it raining, I woke up to overcast skies, drove through the weekend crowds at Colonial campground, and took off up the Thunder Creek trail around 6:30. This stock trail accesses the standard route on Logan, and is the start of some popular backpacks. The well-maintained tread traverses miles of dense woods near the glacially-blue Thunder Creek on its way to Park Creek Pass, passing numerous campsites named for glaciers on peaks hidden above the trees. 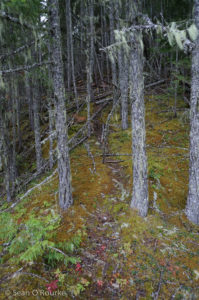 The route for Primus follows the trail to McAllister Camp, gaining 600′ in 6 miles, then gains 4000′ in 2 miles on a climbers’ trail up the ridge between McAllister and Thunder Creeks, ending at treeline near the toe of the Borealis Glacier. After walking right through some guy’s campsite (sorry!), I easily found the start of the climbers’ route. While it is easy to lose in a few places, especially on the way down, a combination of flagging, cairns, and use make it easy to regain on the way up. After a couple hours’ work, mostly in the clouds, I emerged from the woods to catch an occasional view of Primus through the mist. 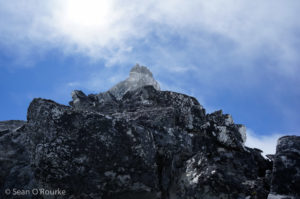 The standard route gains the Primus-Tricouni saddle, then talus-hops west to the summit. However, the bare icefall and adjacent dirty slabs below the col looked unpleasant, so I circled right around the base of what is now a large glacial lake at the Borealis’s toe, climbing heather, then crossed a bit of glacier to the base of Primus’s north ridge. 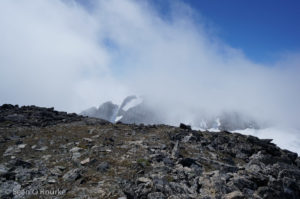 I had read online that the ridge was at least doable, though not classic; I found some standard North Cascades class 3-4 choss-and-moss. Between the clouds, my worn shoes, and the wet moss, I wasn’t feeling it, climbing the ridge crest more slowly than I had expected. Finally topping out on the broad summit plain, I caught a brief view of Austera and Klawatti before the clouds closed in just above my head. Disappointed to miss the likely excellent view west, I lay down in the bright calm to take a half-hour summit nap while deciding what to do next. 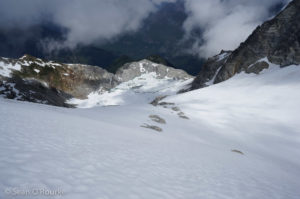 Not wanting to downclimb the north ridge, I decided to try out the standard route instead. After a bit of talus, I linked some snow-patches and the edge of the glacier back to the Primus-Tricouni col, then moved to the rock on the Tricouni side to avoid the steep tongue of bare glacial ice. This turned out to be more or less what I had anticipated from below: wet, gritty third class slabs, awkward but manageable. Circling around the east end of the lake, which is now the outlet stream for the glacier, I returned to the climbers’ trail at the head of the ridge. 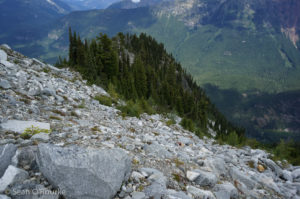 Anticipating that, like most ridge-top routes, it would be much easier to lose going down than up, I had taken a GPS trace on the way up. This saved me a few times, as I slowly veered off one side or the other of the broadening ridge where the trail disappeared. I met a large group of likely mountaineers at McAllister camp, another stomping up the Thunder Creek trail in their big boots, and the usual mix of backpackers and dayhikers on my hike/jog back to the trailhead. The place was loud and packed on a mid-summer Saturday evening, so after a quick pot of nutrient glop, I happily left to find a quieter place to sleep.

Glimpse of Tricouni and Primus