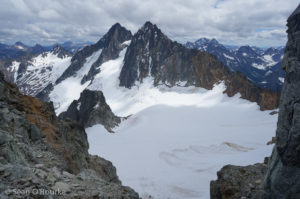 The Ragged Ridge peaks have been on my to-do list for many years, yet I somehow only got around to doing them now. The ridge extends west from Easy Pass, accessed by a good trail, petering out in the long ridge of Red Mountain between Panther and Thunder Creeks. Though some parties traverse the whole ridge, most start or stop at Cosho, the westernmost point above 8000 feet. For efficiency’s sake, I traversed all five of the 8000-foot peaks on the ridge: Kitling, Mesahchie (Panther), Katsuk (Holyoke), Kimtah (Gendarmes), and Cosho (Ragged End). For suffering’s sake, I stupidly tried to return to Easy Pass via a supposed high traverse instead of dropping down to the Fisher Creek trail. 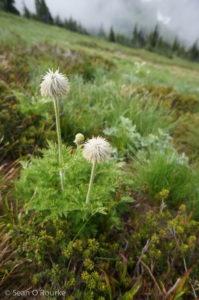 With plenty of daylight, I got my usual anti-alpine (Cascadian?) start around 6:30, hiking the familiar Easy Pass trail. It was once again overcast at the pass, but unlike last time, the clouds were patchy enough to get an occasional look at the peaks above and across the valley. Doubting that I could see well enough to locate the standard route on Mesahchie, which traverses to a rib on its south side, I instead headed straight up grass slopes from the pass to the ridge to start the traverse from the far east end. 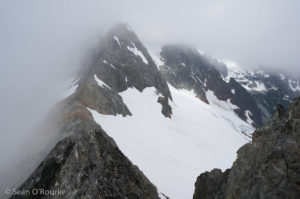 Reaching the crest… somewhere… I headed west across turf and then class 2-3 rock, probably crossing “Cub Peak” on my way to Kitling, which had a cairn but no register. The traverse from Kitling to Mesahchie is long, passing over an unnamed peak in between, but the climbing is not hard, and the ridge is easy to follow even in clouds. The final climb up Mesahchie involves a few 4th class steps and traverses around pinnacles; Beckey claims you can keep it third class by staying left, but the rock on the crest was solid and fun, while that to the left looked chossier. 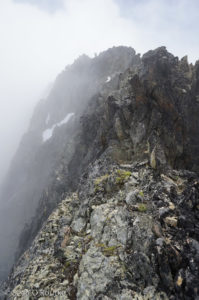 With nothing much to see other than clouds on Mesahchie, I started down what seemed to be the west ridge. When things shortly turned tricky, I got out my compass and decided that I was actually on the northwest ridge. I returned to near the summit, got a quick glimpse of a lobe of glacier, and headed down a gully near another fin. The clouds began to lift as I descended, and I even found a cairn, and I continued doubly reassured to be on the right path. 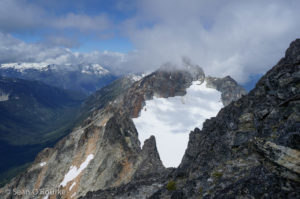 Katsuk is similar to Mesahchie, with multiple fins and ridges, and only slightly shorter. I found an original register on the summit, left by John Roper in 1968. In it he names the peak Mount Holyoke, after his girlfriend/wife’s “alma mother,” and refers to Mesahchie as Panther Peak. Looking into things a bit online, it appears that Fred Beckey chose the current official names, which are all Chinook jargon. The alternate names come from the first ascenscionists, the Fireys and Roper. But back to the climbing…

Katsuk’s west ridge was long, complicated, and often unpleasant. When it is possible to stay on the crest, the going is solid and easy. However, this is often not possible, or slower than traversing on the south side. There the rock is chossy and often unpredictably rotten: I managed to pull off a couple of toaster-sized blocs that looked solid. 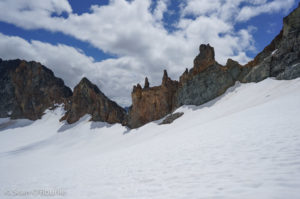 After over an hour of downward traversing, I reached the saddle near Kimtah. The climb looked like more chossy side-hilling, so I thought I would be clever and cross the western Katsuk Glacier to the north ridge. After making my way up a snow-tongue and some gritty, outward-sloping slabs to a notch, I realized that there was no easy way around a vertical step in the ridge, and that the other side of the notch was near-vertical. Oops. Retreating, I decided to salvage a bit of pride by climbing Kimtah’s northeast face west of the two red “Grotesque Gendarmes.” This turned out to be fun fourth class, with mostly solid rock, and deposited me back on the ridge near the red ledge mentioned by Beckey. 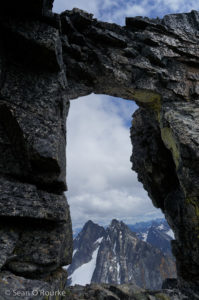 From right below, Kimtah is a confusing mass of gullies and pinnacles, and it is not at all clear which is highest. I traversed the ledge to a broad, red, third class gully, climbed most of the way up the thing to its right, then realized the one on its left was higher. After a retreat and some fun scrambling, I passed a decent-sized natural arch and soon reached the summit. The day was finally clearing, so I enjoyed views of Mesahchie and Katsuk to the west, and most of Goode and Logan to the south. The remaining traverse to Cosho was a breeze with full visibility: drop down some choss, get on the Kimtah Glacier at the col, then get back off for a third class scramble to the summit. 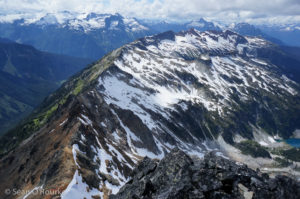 From Cosho, it is clear why many people stop the traverse here: nothing on Red Mountain is nearly as high or impressive as the eastern peaks. After a short rest, I slid back to the col, then started descending the gully toward Fisher Creek. If it had been a quick scree-ski, I probably would have dropped down all the way to the trail. However, it appeared to be a jarring, slow mixture of scree, slabs, heather, and scrub all the way down, so I tried to find the traversing ledges described in a trip report online. 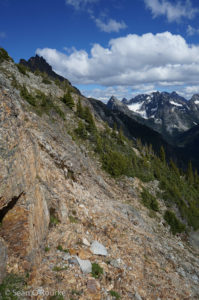 In theory, there is a decent traverse between 7000′ and 7200′ all the way back to Mesahchie’s standard route, saving the 2800′ climb from the Fisher Creek trail back up Easy Pass. Descending and hiking the trail probably would have taken me about 2.5 hours. Instead, I spent 3.5 hours sidehilling through awfulness, putting in a good part of that 2800′ evading cliffs and brush. I won’t dwell on it. The right line may save some time, but it’s best to just suck it up and drop down to the trail.

Finally back on trail at Easy Pass, I put on This American Life and jogged back to the car, which I reached with no headlamp. With the correct return, this would have taken about 13 hours, almost 5 on trail, making it a long but reasonable day. The way I did it — 14 hours, and just over 2 on trail — left me feeling a bit worked.

Logan and Buckner from Kimtah