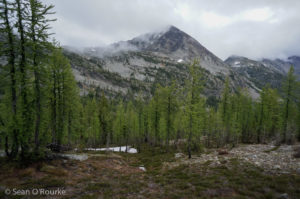 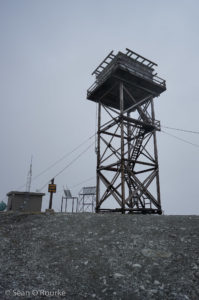 After some time watching the bad weather, doing the odd workout trail, and generally feeling sorry for myself, I headed over SR 20 to the east side of the range. There the weather is usually drier, the peaks are gentler, and the vegetation is a bit less dense, meaning that they can be done even in wet weather without undue suffering. Working off Bulger’s top 100 list, I picked out three peaks buried deep in the Pasayten Wilderness: Osceola, Carru, and Lago. With the first 9 miles of the approach along a likely well-maintained trail from Slate Pass, they would involve a decent though non-damaging amount of running. At around 7,000 feet, Slate Pass is a crazy-high trailhead by Cascades standards, made possible by the military’s former worries about Soviet bombers. They blasted a road up Slate Mountain to the old lookout, then blew the top 40 feet off the peak for a radar installation. When they finished, they even raised the lookout on a 40-foot tower so it remained in exactly the same position. 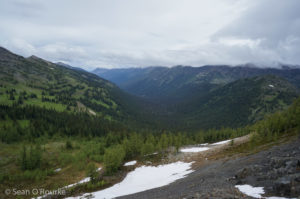 I got up early, saw that the trailhead was completely fogged in, went back to sleep, and started at a more civilized 5:45. I had planned to just wing it based on memory of my road atlas, but I fortunately packed my map and GPS. The cloud cover was not much of a navigational problem, but the dense, redundant, and largely unsigned trail maze certainly was, causing an unplanned mile-long detour at one point before I pulled out the map and verified my mistake. I eventually made the descent to the Middle Fork of the Pasayten, joining the trail from Robinson Creek. The Forest Service trail crew had recently been going to town on the winter’s blowdowns, turning a frustrating ordeal into a pleasant one-hour jog. 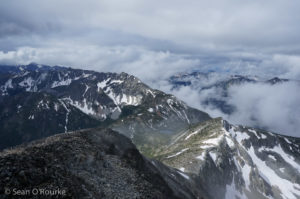 The one intersection with a sign, oddly, was the one for my trail up toward Shellrock Pass. Though not regularly maintained, the trail is in surprisingly good shape as it switchbacks steeply up past Freds Lake to near Lake Dorothy. There are a half-dozen significant blowdowns, but oddly the hitching-post near Freds looks recent. At Dorothy the trail disperses and fades; the continuation to Shellrock is not obvious, and I did not look for it. Instead, I headed up (too early) toward Osceola’s southwest ridge for the start of what I hoped would be a traverse.

After a bit of up-and-down to get to the real southwest ridge, I found bits of use trail along the least-bad path through the talus. The peak dropped off in steep slabs to the left, and the loose, mossy talus to the right was awful, but a route along their intersection was efficient. It looked like it might even be clearing as I reached the summit: I saw most of Carru, and even parts of Lago. 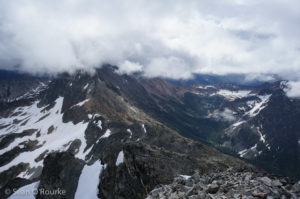 Unfortunately, soon after starting out I discovered that the terrain between Osceola and Carru is somewhere between awful and impassable. After descending a bit of loose, sharp, ankle-biting talus, it looked like I would probably cliff out. A long, discouraging traverse across more of the same got me to a slightly more solid rib on the south side; the best approach is probably to retreat down the southwest ridge, then contour on the heather below. It was starting to sprinkle a bit — nothing serious, but this was already taking more time and effort than I had hoped, and I was running low on food and motivation. Having seen the area, managed some sort of workout, and tagged a peak, I was content to jog and hike back to the trailhead, saving my energies for another day.

View back toward Dorothy Lake

One response to “Osceola”