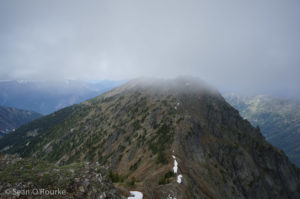 Majestic Mountain happens to be the last peak described in Beckey’s Cascade Alpine Guide. That’s about the most remarkable thing about this minor highpoint of a ridge north of Rainy Pass. It caught my attention as a fairly painless 5000-foot climb from SR 20 via the abandoned but still decent East Creek trail, which was new to me and near Easy Pass, where I found myself frustrated by a dense, cold fog that refused to move. So after my pointless morning lap on Easy Pass, I had lunch, then drove back down the road a bit, reloaded my pack, and started up East Creek. 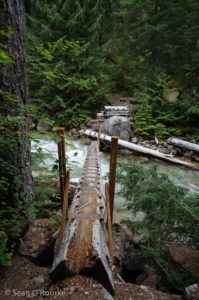 Ignore the sign about a missing bridge: while the old stock bridge is gone, a perfectly good improved log with hand-lines remains across Granite Creek. Past that, the trail switchbacks steeply up East Creek’s right bank, then sidehills for awhile before crossing to the left side and passing through a few slide paths. About 4 miles up the trail splits, with one branch leading to Mebee Pass and the PCT, and the other to the Gold Hill Mine and Canyon Creek. 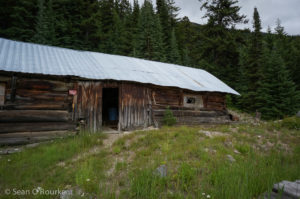 The latter branch seems well-used to the mine building, which is in surprisingly good shape, and remains usable as it continues slightly right and uphill of the structure. The trail finally becomes obscure after it traverses out into the open, grassy slope of Majestic’s west face. Where the trail grew fainter and crossed a large slide gully, I randomly decided to leave it and head up. This proved mildly unpleasant, but better than the loose dirt and scree to either side, and led just south of the slightly-lower southern summit. There is unfortunately no similar route leading to the true, northern summit, which sits firmly on the Boulder Creek side of McKay Ridge. I found a surprising number of names in the wet register; maybe, like me, they were frustrated peak-baggers looking for a consolation prize.

Having ignored Beckey’s advice on the way up, I decided to follow it on the way down, returning to the southern summit and descending McKay ridge to where the old trail seemed likely to cross. This route did not seem much faster or more pleasant than the one I used on the way up, and I lost the old trail in the long traverse back across open ground. Once back on the trail, though, it was a pleasant jog to the trailhead.