Speed on the I-90 corridor 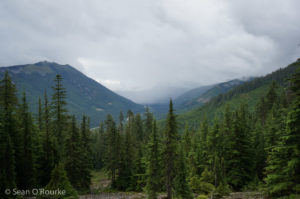 With the forecast ranging from overcast to snowing in the North Cascades, I headed down to I-90 to tag some workout peaks. The west side of Snoqualmie Pass has numerous peaks with good trails and about 3000 feet of elevation gain, perfect for days when brush-bashing would be wet and miserable, and route-finding difficult. It can also be mobbed on a summer weekend, but the crowds are mostly concentrated on a few more popular peaks like Mount Si and Granite Mountain. For those with time to kill in the area, here are some reviews.

Mount Si, farthest west and just outside North Bend, is the classic Seattle-area workout peak, popular among runners and those training for Rainier. The route is mostly a well-maintained trail, with the final 200 feet or so a third class scramble up the “haystack.” The trail mostly maintains a consistent, runnable grade, efficiently gaining 3000 feet in under 4 miles. I did it for speed, managing 53:20 from base to summit; the record is considerably faster.

Granite Mountain is a bit taller than Si, and features a closed lookout on its summit. While less crowded than Si, it is probably the second-most popular peak in the area, and the parking lot overflows on weekends. The trail is less efficient than Si’s, with flatter sections on the top and bottom, and rougher, un-runnable ones in the middle. I also ran this one, taking 57:30 from trailhead to tower.

McClellan Butte is somewhat similar to Si: about 3000 feet of gain, mostly on a good trail, with a final third class summit scramble. The trail is less efficient, with some annoyingly gradual switchbacks and flat sections following old logging roads near the bottom, and a long rolling traverse near the top. There seems to have been some kind of structure near the top at one point; only the anchors remain.

Mount Defiance lies across the valley from McClellan. The climb is mostly on the well-maintained Mason Lake and Defiance trails, with a final use trail to the summit. After a consistent climb, the trail descends and meanders past the lake, making it a poor vertical ascent rate test. However, it is also somewhat less crowded than neighboring peaks, and the lakes would probably be scenic on a clear day.

Silver Peak is an easy hike, gaining less than 2000 feet from a high trailhead on the PCT at Windy Pass, 5 miles of good dirt road from Snoqualmie Pass. It is popular enough that the wretched talus of its upper slopes has been beaten into a decent trail. The PCT section is too flat to make it a good workout peak but, being on the crest, it probably has good views of the surrounding peaks, and the Enchantments farther northeast. It also has 2000 feet of prominence, if you’re into that.