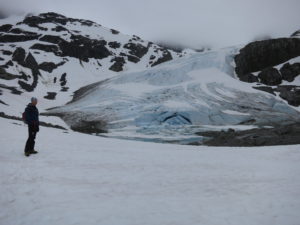 It was time to get back to the mountains. While I have yet to explore much in the southern Coast range, online information is much sparser than for most parts of the States. Based on the available beta, I selected Wedge Mountain, the highpoint of Garibaldi Provincial Park. Its northeast ridge is a moderate snow climb with minimal crevasse risk, the approach starts relatively high at just over 3000′ and features minimal bushwhacking, and it probably has a nice view of the range south toward Squamish and Vancouver.

After one final fancy meal, Renée and I drove up to the well-signed and -used Wedgemount Lake trailhead, next to some sort of ugly construction project north of Whistler. We found perhaps a dozen other cars, including a few people camped out to start in the morning. Apparently none of the others were headed peak-ward: the next day was Flag Day, so even non-mountaineering Canadians were out enjoying the start of their brief summer. 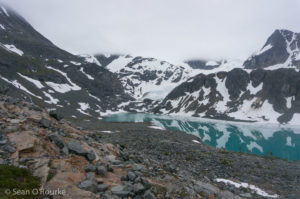 It was drizzling slightly when we started not-too-early the next day, wearing heavy boots and shells. The trail was slightly brushy in a few open sections, but stayed mostly in the woods, so we were thankfully spared the morning dew-soaking. Like most trails in BC, this one was built by users, so it goes nearly straight up the drainage, gaining over 3000′ in about three miles on its way to a hut and camping area at Wedgemount Lake. As the woods opened up, we got occasional views of the valley below, a nearby cascade, and the feet of mountains to the west, but no sun. 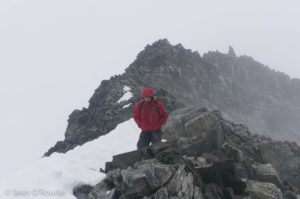 We came upon the lake suddenly, blue from glacial till and still holding some winter snow, under clouds that obscured the surrounding summits. The toe of the Wedgemount Glacier, the start of the route, was visible across it to the southeast. While it looked gray and cold, the day was relatively warm, and the rain was rarely more than a gentle drizzle. After a stop in the empty hut to get chilled and put on more clothes, we continued on a path and bootpack around the lake, then followed some old ski tracks toward the Wedgemount-Weart glacier col. There are two ways to reach the northeast ridge, and we chose the lower one to avoid the crevasse field on the upper Wedgemount. 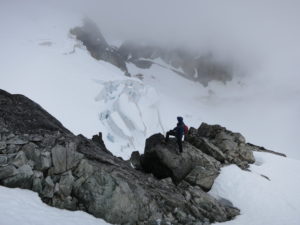 Nearing where the toe of the ridge should be, we found ourselves slogging up slush in a mixture of cloud and gentle drizzle, able to see only a couple hundred yards ahead. The ridge starts out broad, though fortunately narrow enough to be recognizable in the fog. The cold and wet became uncomfortable in windier areas, and there seemed little chance of a view at the top, so I thought of turning around. However, there was no real danger of freezing or getting off-route, so we continued up a mixture of snow and wet, loose talus. Past a short third-class section, we found what was likely a more direct couloir from the Wedgemount to the ridge, and I added a cairn for the way down. 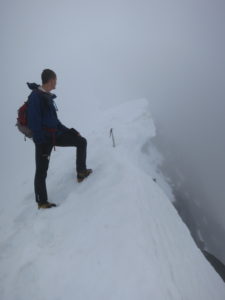 As we climbed, the ridge became more snow than talus, and we began following a bootpack from the past few days. Judging by online photos, the climb would have been spectacular on a clear day, with the large, flat Weart Glacier stretching away to the north and east, and the summit looming ahead. Today, though, we only had variations on the theme of “gray.” The ridge was mostly gentle, with a brief steep section below the summit plateau. 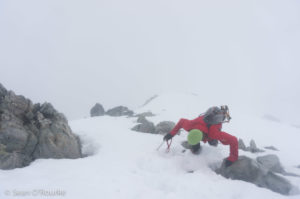 Fortunately there was a sizable summit cairn, because otherwise the high point would not have been obvious in the clouds. We suffered for a bit on top, then found adequate seating in the summit’s lee, where it was almost warm enough not to need jackets for a few minutes. Someone had “thoughtfully” left a nasty cigar in the summit register jar, so I didn’t bother picking through the scraps of paper for an unlikely familiar name. 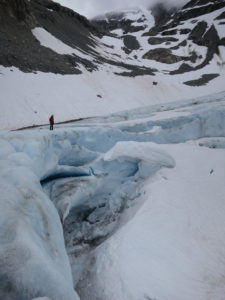 The descent went easily, with a bit of inward-facing downclimbing on the steep part, and a mixture of plunge-stepping, boot-skiing, and postholing on the rest. The weather pretended to be clearing a few times, providing views of the Weart and Wedgemount Glaciers to either side, and maybe even the summit. The lake, deserted on the way up, was now swarming with backpackers, including a dozen or so school kids hiking up to the glacier’s snout. Things were almost festive despite the continuing threat of drizzle. The 3000 feet of stomping down the trail were not especially fun, as the stiff boots mashed the soles of my feet, and the slick roots and mud constantly tested my balance and reflexes. Despite all my complaining, it was a good day: mission accomplished with manageable misery. On a clear day, Wedge would be genuine type I fun.

Lake and toe of Wedgemount Glacier

Almost-sun on the way out (Renee’s photo)