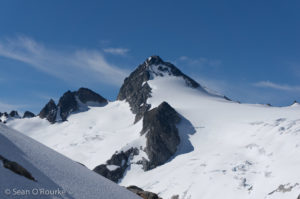 Snowfield Peak is the highest of a cluster of peaks bounded by Thunder and Newhalem Creeks, and by the Skagit River (SR 20). The name is apt, if lacking imagination, since the peaks’ defining feature is the large, adjacent Colonial and Névé Glaciers, each sheltered in a northeast-facing bowl. Both are unusually large and flat for the North Cascades, with the Colonial currently ending in a jumble/lake at a rock constriction, rather than an icefall or moraine. 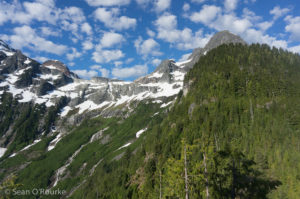 Though there may be other routes, most people approach by bashing a vertical mile up a ridge from Pyramid Lake, then crossing the full length of both glaciers. Both the bushwhack and an earlier, mistaken superstition about glaciers deterred me from climbing Snowfield before. However, there is a decent climbers’ trail, route-finding on both glaciers is easy, and the peak is well worth the trouble. I expected it to be a long outing, but it only took about 5h20 up (3 hours to the snow, another to the Colonial-Névé col), and less than 10 hours car-to-car. 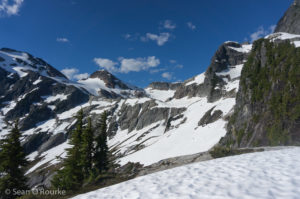 The mosquitoes were out, but not a problem as I followed the familiar trail to Pyramid Lake, then took off on a sort-of cairned sort-of trail clockwise and up to the ridge. (On the return, I discovered a better trail counterclockwise.) The climbers’ route is easy to lose in a few places, but also easy to find by meandering back and forth on the ridge, only slightly less clear than the one to the southern Pickets. I reached the final notch in Pyramid’s northeast ridge with minimal pain, then followed an old bootpack traversing south to the Colonial Glacier’s snout. 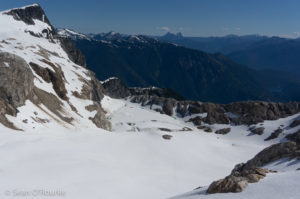 The base of the glacier is a melange of water, ice, snow, and rock, held in by a constriction between Pyramid and Colonial’s north ridge. Some of the water is above the glacier, some is probably below, and the whole mix looks vaguely treacherous for walking, but I never sank more than calf-deep in slush, and never heard cracking underfoot. The glacier turns into the usual minimally-crevassed snow slope as it climbs gently to three saddles to the south and west. I climbed to the right-hand one, traversed to the middle, and was finally able to see Snowfield’s summit about 4 hours into the day. 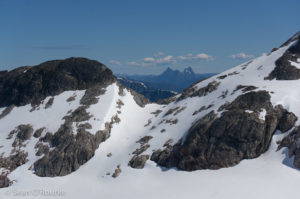 From the well-built tent platform at the saddle, the route descends a couple hundred feet before crossing a saddle on the Névé Glacier and making a gradual climb toward the summit pyramid. After a slight detour left around some cracks on the saddle, the obvious route follows a gentle ridge up the center of the glacier, aiming just right of the summit. The upper glacial plateau is barely uphill and seemingly endless. With the ice still covered by soupy early-season snow, my feet were getting unpleasantly cold, so I hurried for the rocky base of the peak’s west ridge. 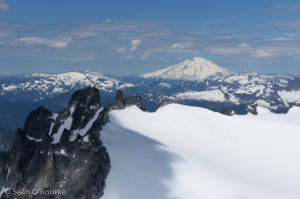 The ridge starts out as an easy walk up heather and talus, then surprisingly turns into a bit of an actual scramble in the final 100 feet. However, other than some hijinks when I ignored the cairns, nothing was harder than third class. As the evidence of the cairns demonstrated, Snowfield is much more visited than Spider, so I found no summit register. Its popularity is deserved, as it has an excellent view of many central Cascades peaks, especially Buckner through Eldorado to the southwest. It also has decent summit seating, so after wringing out my socks, I spent half an hour or so being lazy before starting down.

While it was warmer and possibly faster to take the ridge up, I saved some time by cutting the corner down a snow-tongue on the north face on the way back. The climb back to the head of the Colonial Glacier was relatively painless, I once again managed not to drown in the blue stew at its snout, and I soon found myself spacing out on the trail back down Pyramid’s ridge. Fortunately there were no dangerous wildlife in the area, because I nearly collided with three guys packing up mid-day to do some peaks the hot, heavy, slow way. After a few seconds of freak-out, I tried awkward conversation, then concluded it was best to put my headphones in and keep moving. After cleaning up a bit in Pyramid Creek, it was back to Newhalem for cell service, Marblemount for internet (one or the other, folks!), and onward.

Wind sculpting behind the Horseman, etc.

Fast way down the summit