Since this site is about peak-bagging, and I spent some time mostly not doing that recently, I haven’t had much to write. This was due to a mixture of bad weather and time spent on “self-improvement” in one sense or another; the line from Fight Club comes to mind, though I think I have been making at least slightly better use of my time. 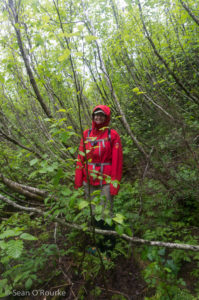 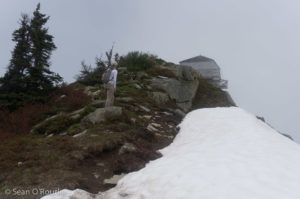 Better use of a gray day.

There has been sport climbing, most of it wet, some also featuring slug hazards. There has been fire lookout tourism, a fine thing to do when brush and rocks are too wet to deal with. There has been (mis)use of beater bikes, always a favorite past-time. There has even been some “social” hiking and climbing, which is probably a good psychological counterweight for the solo majority of my summer.

About the only peak-bagging-related thing from the period was a successful early-season speed-run of the Grand. I was nowhere near Andy Anderson’s FKT, of course: he is one of the best mountain runners in the world, and I am not. However, I was pleased with my time, which was very close to my estimate: 4h02 Ranch-to-Ranch, and 2h36 Ranch-to-summit. That puts me about 25% off the record both up and down, which is about what I should expect.

I had hypothesized that the glissades on an early-season attempt might make the descent relatively faster, but this seems not to be the case: though I took only about 11 minutes from the Lower Saddle to the Meadows, I lost time picking my way down the partly-iced-over summit knob and down the awkward snow between upper and lower saddles. Conditions were about as good as I could expect for this time of year, with an Exum-installed bootpack between Lower and Upper Saddles making crampons unnecessary. I spent about 6 minutes total on crampon transitions and 3 minutes enjoying the summit on a perfect day, and probably lost a few minutes in either direction coming from the Ranch instead of Lupine Meadows. Altogether, in dry conditions I could probably shave 10 minutes or a bit more off the ascent: 6 minutes of transitions, faster scrambling from the Lower Saddle up, and a light waist pack instead of a ~5-lb pack. I might not go too much slower on the way down, but even the thought of doing that to my knees makes me cringe.

So anyways, back to more familiar programming.