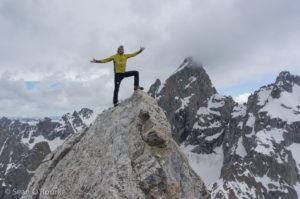 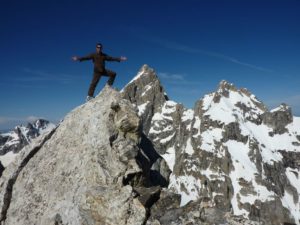 Teewinot gets a bad rap because its standard route is a good place to get avalanched or fail to self-arrest in the early season, and becomes a crowded scree-chute later on. However, it has the advantages of avoiding Garnet Canyon, allowing a quick bail-out if conditions go bad, and offering 5500′ of vertical with a minimal approach even by Teton standards. As the years go by and I have fewer Teton objectives, I find myself using Teewinot more, both as a climb and as a work-out peak.

My first Teewinot of this year was a quick run up to the Apex, about 2700′ of gain on a steep trail to treeline. I did this to gauge both my fitness and snow conditions in the range. My fitness seemed okay: the climb took about 45 minutes. As I had experienced in the Gros Ventres the day before, the snow line is abnormally high this year: I only hit consistent snow in the last 100′ vertical or so, and the face above seemed to have consolidated. 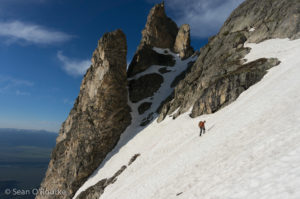 Approaching past Worshipper and Idol

My second was a bit of exploration and two tick-marks. The Idol and Worshipper are two prominent pillars just south of the standard route. I had passed them too many times to count, but never taken the time to climb them, despite their being only low 5th by various routes. With an easy day planned and a mediocre weather forecast, I decided it was time to check them out.

I made my way to the Apex, much slower now with a pack, then kicked and postholed up through the krummholtz toward the Worshipper. I watched three skiers make perhaps a dozen turns each, then pick their way back through the brush and rocks to their shoes for the long hike back down. It didn’t seem worth the hike to me, but then again, I had just done the same for two pitches of scrambling… 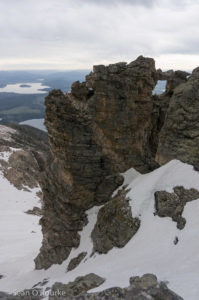 Worshipper from near Idol

I started out by trying the Worshipper’s long, east, downhill face, supposedly the easiest route to the summit. While the climbing was not especially hard, the variable-quality rock and outward-sloping ledges were not fun, so I traversed around left into the notch between it and the Idol. This side is shorter, steeper, and harder — 5.4, according to the Ortenburger guide — but also more secure and fun, climbing a near-vertical crack/chimney with a bulge partway and positive holds to be found throughout.

Pulling over the bulge, I was surprised and pleased to see a natural arch directly in front of me, with a small tree in its center. From the top of the chimney, the route goes through the window, then around to the right and back over it to reach the highpoint. Cool! I even found a summit register, a rarity in the Tetons. It only went back a few years, but suggested that perhaps 1-2 parties a year make the climb.

I retraced my steps, passing an old piton-based rap anchor, then traversed and climbed around the north side of the Idol. I made this harder than necessary, crossing some wet, slimy slabs and grinding my way up a chimney rather than going the long way around and traversing in from the northwest. Still, the climbing was still all easier than the Worshipper, with a couple low 5th class moves and some scrambling on the southwest side quickly leading to the top. I appreciated the view quickly, as the weather was getting colder and possibly wetter, then returned to the Ranch to waste the rest of the day. 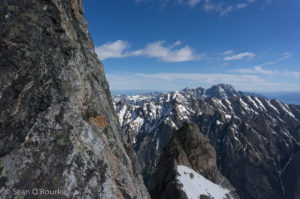 My final Teewinot turned out to be an excellent use of a half-day, timed nearly perfectly to avoid the atypical early-season afternoon thunderstorms. Eric, a squad leader in the 10th Mountain Division, had a couple free days before starting a course, and was itching to climb. After considering more ambitious options on Owen, we gave in to the realities of the forecast and settled on a shorter route on the north side, starting from the col with Crooked Thumb.

With a 4 AM start from the Ranch, we actually had a bit of headlamp time passing through the aspens at Teewinot’s base. Stripping to t-shirts, we made the climb to the Apex in between 1h20 and 1h30, good time with trad gear. I guess I shouldn’t have been surprised that Eric was fast: he does this for a living, usually with a much bigger pack.

The snow in the krummholtz was slushy, but above it was firm enough to boot past the Worshipper and Idol without postholing. Above, we traversed around the right-hand shoulder, suffered across some snow already softened by the northeast-rising sun, then followed a grassy, partly snow-covered ledge on around to the couloir leading to the Crooked Thumb Col. This perch has excellent views of Owen’s northeast face, Cascade Canyon, and the seldom-climbed peaks north of Mount Moran. Unfortunately, it is too close to offer a good overview of Teewinot’s north side. 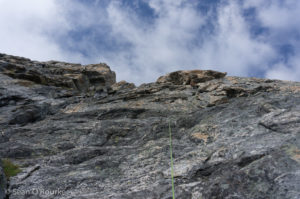 A few pitches of actual climbing

We puzzled over route descriptions and photos for awhile, then descended back east, roped up, and started simul-ing some random terrain left of the north ridge. When we got tired of this, we headed back right, where Eric built and anchor and started leading up the left side of the ridge. Since he passed a couple of old pitons, we figured we were “on route” for some version of “route.” The climbing was varied, fun, and mostly moderate, with the exception of a wide stem followed by some thin face climbing. I haven’t climbed in boots for awhile, but it felt like 5.8 or hard 5.7.

I led the second pitch, whose crux was an undercling/traverse left around an overhang then easier climbing to a broad ledge. One could probably exit left from here, but I thought it would be fun to continue straight up a chimney/crack. This turned out to be incorrect. After thrashing and scrabbling up some sort of off-width, I was forced by my own rope drag to build a semi-hanging belay out of a #2 cam and two tiny nuts. After an awkward sit-on-my-face gear exchange at the belay, Eric led 20 feet more tricky climbing up out of the chimney, then continued across easier ground to just below the summit.

Other than 20 seconds of graupel, we had enjoyed calm, clear weather for most of the climb, and had talked about traversing on to Mount Owen. However, as often happens on a northeast-facing Tetons route, we topped out to find that the weather situation was not as we hoped. With inclement weather coming from the south and west, we quickly packed up and headed for the summit, where I reenacted the photo I took on my first Teewinot climb in 2010. Descending the east face took longer than anticipated. The snow was thin slush over a harder base layer, soft for kicking steps but hard for boot-skiing, so we stuck to the rock for much of the upper face. Back at the apex, I resigned myself to an hour or so of clomping misery descending the dry trail in full-shank boots. The rain and lightning started maybe a half-hour after we reached the Ranch, and continued for much of the afternoon, but our well-chosen mission was complete.

Jenny Lake in the morning

Worshipper from near Idol

Approaching past Worshipper and Idol

A few pitches of actual climbing

One response to “Lots of Teewinots”