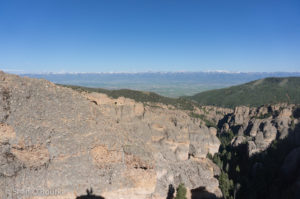 Maple Canyon is a climbing area in central Utah featuring mostly single-pitch sport climbs on solid conglomerate rock. This means that routes are steep for their grade: 5.9-10a is near-vertical, while 5.12 is massively overhung. Maple also has good cheap camping, is high enough to be cooler than the surrounding desert, and is much less dirtbag-hostile than the hellish sprawl of greater Salt Lake City. We were both pretty worn down, so we ended up spending an afternoon and the better part of the next day hauling jugs and clipping bolts. 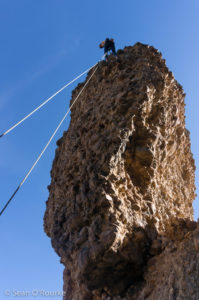 After some extracurricular four-wheeling, we returned to the main climbing area to climb Haji Rock, one of the few multi-pitch routes in the area. Renée got most of the real climbing on the first and third pitches, while I “led” the lame but necessary second pitch, which consisted of a step-across, a few easy moves, a search for the bolts, and much time pulling up the remainder of the 70m rope. I was happy to follow the third pitch, a short, overhanging 5.9 to the top of the Haji’s head. After signing the register, one free-hanging and one bouncing rap took us back to our packs.

We finished off the evening in the Zen Garden area, trying out a 5.9 and some 5.10s, and I confirmed that I am basically a 5.9 climber these days. That’s better than I have any right to expect given how little I climb, but kind of pathetic for the amount of time I spend in the mountains. So it goes. 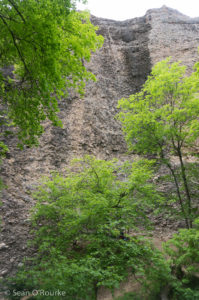 Having sampled the right fork our first day, we moved over to the left for the second. Though there had been sounds of manly exertion echoing in the canyon the previous day, the area had not been at all crowded, and the pleasant lack of waiting continued. We found a next of 8s, 9s, and 10s on Orangutan Wall, and worked them from easiest to hardest, alternately belaying from the Maples’ shade and roasting on the sunny wall. My forearms were failing by early afternoon, but I felt I had done enough steep, crimpy climbing to improve at least a little.

We decided to have dinner in Salt Lake before parting ways, and after a startling reminder that speed limits go to 80 in Utah (i.e. everyone drives at least 85), cheap Mexican food was procured. I headed northeast to the forests of western Wyoming, while Renée hoped to run errands and crash in town. With the help of my usual drive-time mix of vile energy drinks and beef jerky, I made it to a nice dirt road off a pass a couple hours south of Jackson. Renée was less fortunate, learning to her dismay that the normally camping-friendly Walmart does not allow overnight parking in metro SLC. I swear that place gets worse every time I visit…

This entry was posted in Climbing, Tourism, Utah. Bookmark the permalink.