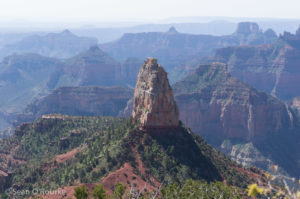 To recover from the Nankoweap death march, we spent an easy recovery day on Mount Hayden, a white butte close to Point Imperial. Rising late, we drove out to the overlook, spent awhile sorting gear, looked at the butte just 2/3 of a mile away, then hiked 100 yards of pavement, jumped the fence, and dove into the brush. Before the fire, the Hayden approach was supposedly fairly friendly. However, the usual post-fire scrub has taken over this part of the rim, including the dread New Mexico locust. 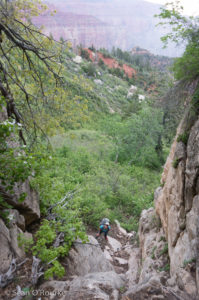 The approach descends terribly loose dirt, then follows the ridge right of a bowl before diving into the brush to a break in the Coconino. Here the thrashing began: Renée opted for leather gloves and brute force, while I chose finesse, careful writhing, and a certain amount of bleeding. This part was not bad, as the watercourse was mostly scoured free of soil and plants. We followed a seemingly useless fixed line for awhile, then actually used it to descend a low 5th class step, where it was vaguely helpful. 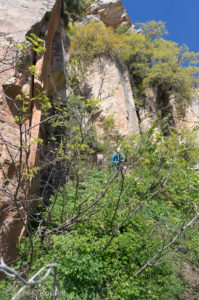 Then we entered the suck. The traverse back south to the Hayden-rim saddle had also burned, and is now home to a thriving locust population, occasionally interrupted by oak-brush. There is a network of faint use/animal trails, with one near the base of the cliff being the best, but finding this one, especially on the way in, is next to impossible. Instead we picked our way through lower down, linking logs, surviving trees, boulders, and even the blessedly spine-free oak-brush to minimize time spent in the spiny horror show. 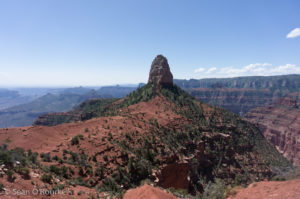 We finally found relief at the red dirt ridge leading southeast to Hayden, where we took a break to sweat and admire our goal. From here it was a fairly painless hike along the ridge and around the butte’s north side to the base of the climb. I took the first pitch, which started with a tricky move from a red ledge to the more solid white sandstone above. After that, it was mostly a low 5th class bushwhack to a sort-of belay ledge full of cactus, dirt, and loose rubble. Though I had climbed sandstone before, I was not used to this gritty variety, which I was slow to trust. I was slowed further by the use of half-ropes, which allow longer rappels and supposedly reduce rope drag on wandering pitches, but mostly just complicate belaying and rope management. 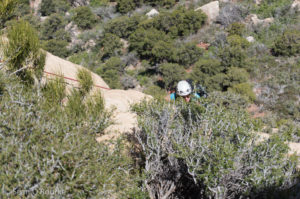 I belayed Renée up while she freed one rope or the other from plants, then she led up more similar terrain to a bulge with a fist/knee crack, the route’s second harder move. After trying a couple options, she decided she did not want to lead it with so much rope out (i.e. a long, bouncy fall while it stretched), so she belayed me up to an awkward stance, where I thrashed around and acted tentative for awhile before jamming fist, foot, and knee in the crack to reach flatter ground, finding a two-bolt anchor perhaps 20 feet on. 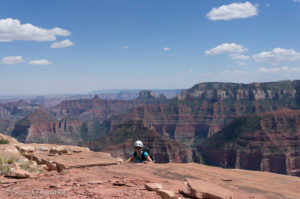 It looked like scrambling to the summit from there, so I flaked 100 meters of rope, brought Renée up, and we both unroped for the sometimes-exposed scramble. The final 20 feet on the left-hand side of the butte were a bit tricky, but all the holds were there, and we soon emerged on a large, perfectly flat white table. From this perch we could see the Nankoweap route to the north, and the Palisades and start of the main canyon to the south. We could see people at the Point Imperial overlook, but could not tell if they waved. 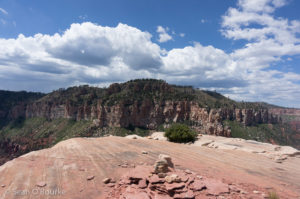 Photos taken, it was time to get off this thing. After scrambling back to the anchor, I threw the ropes and slowly rapped, disentangling the ropes from themselves and the brush as I went. The descent requires two double-rope rappels, so I looked for bolts and slings as I went, but found none as I neared the end of the ropes, so I put in at a comfortable ledge, then shouted for Renée to try her hand at finding them. With some searching, she found a slung block, a decent bolt, and a lousy one, on a pedestal 30 feet up to my left. While she pulled the ropes, I soloed up to the pedestal, then clipped in for an amazingly bush-free rappel onto either (1) our packs, or (2) a yucca patch; I chose the former.

The return went much better than the approach. From the ridge connecting Hayden to Imperial, the route stays near the cliffs and is relatively easy to follow. It descends from the cliff near the Coconino break, where it joins a more prominent but ultimately worse route at an obscured junction. I found this use trail pleasant, but only compared to the morning’s spiny hell. After nearly missing the turn up to the fixed rope, we scrambled the gully, bushwhacked back to the ridge, and struggled up the loose dirt to the paved path. We chatted with some friendly Coloradoans who knew a bit about climbing, then headed south to the campground for showers, water, and a rim-side dinner.

Either the north rim has a population of several million deer, or all 500 of them spend their nights right next to the road. I was happy to follow Renée at safe braking distance as she shooed them out of the way on the drive back to Jacob Lake. She apparently found the experience somewhat stressful. We were both tired, so we pulled off on an abandoned forest road a short ways south, found a mostly level place, and promptly passed out.

Even the climb is brushy