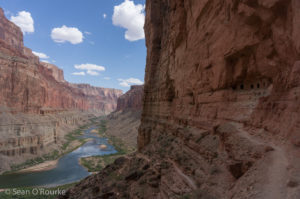 After more uncharacteristic but not unwelcome water-adjacent activities, we were off to the Grand Canyon for what turned out to be two fairly intense days. The first part of the plan was to backpack the Nankoweap Trail, a less-used and challenging route from the North Rim to the Colorado northeast of the main canyon. I had first become aware of this trail while researching last year’s trip down the Tanner Trail to the Little Colorado. I was interested in seeing it both because it passes through a new-to-me part of the canyon, and because it is the northern part of an old horse-stealing route leading up the Tanner and on south to Mexico. Renée gamely played along. 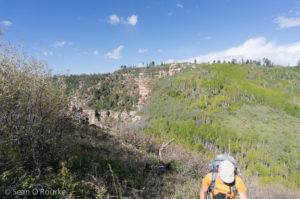 The trailhead is at the end of a long dirt road following the National Park boundary east, drivable at fairly high speeds even late at night. This being National Forest land, there was ample free camping at the trailhead (i.e. enough for 3-4 parties). We got a leisurely start, eating a decent breakfast and packing various camp-stuff before taking the rolling trail along the forest boundary down toward Saddle Mountain. 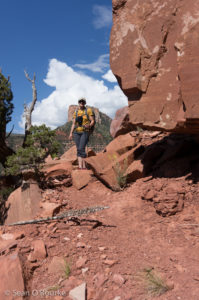 Where the trail joins another from the north, it crosses into the park and descends steeply south, then contours along the Supai layer to Marion Point. Like most Grand Canyon trails, its course is constrained by breaks in the white Coconino and red-painted gray Redwall cliffs. In this case, the breaks dictate a long and at times semi-exposed traverse to the saddle west of Tilted Mesa. As this traverse is south-facing and dry, I had packed an extra gallon of water to leave at some appropriate-seeming place. My knee was not altogether happy with the extra eight pounds, so I dropped the water at the saddle, a mere 2500 feet down the canyon. 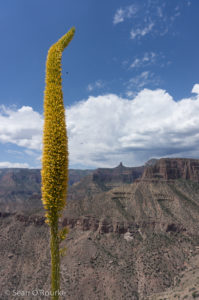 Along the traverse, we had met a couple hiking out, each party surprised to see the other in this little-used corner of the park, and they mentioned making camp at Nankoweap Creek rather than the Colorado. This sounded like a good idea to me, as it would both make the hike out shorter, and justify my caching the water so high up. Below Tilted Mesa, the trail descends southeast across a loose, steep slope, passing through the Redwall via a rubble-pile before continuing to something like the Tonto Plateau. Unlike in the main east-west canyon that most visitors see, where the rock strata are flat and parallel, the layers here are tilted and confusing, with the same rock appearing at different elevations to the south, and across the river to the east. There were also flora and fauna. 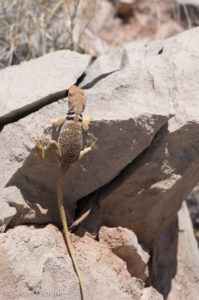 Below the Redwall and Muav, the trail enters a scorched desert hellscape, crossing spiny brush, cactus, and sharp rock on its way toward the cottonwoods suggesting some kind of watercourse. Though these water sources are often buried, we found Nankoweap Creek to be 3 feet of swiftly-flowing, though warm and not especially tasty, water. After a break in the shade, we crossed to find a popular-looking camping area, where we ditched most of our gear before continuing downstream toward the river and some rumored ruins. 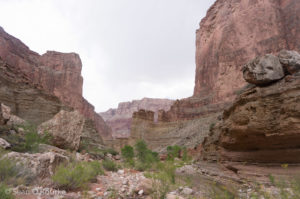 The river was farther away than I thought, around endless bends in the lower canyon. Though we found occasional cairns and bits of trail, most of the route was a boulder-hop along one or the other side of the creek. Most of the way down, we found a superior source of water: a virtual spigot of a spring coming from an overhanging rock just above the creek. I quickly topped off my bladder, diluting the Nankoweap-y taste of the contents to an acceptable level. 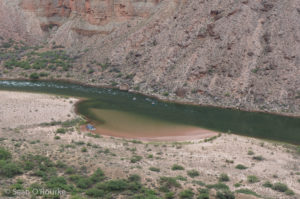 The stream meets the river in a nasty locust- and mesquite-soaked delta, but a trail leads up and south, crossing over a low ridge before descending to two beaches popular with rafters. Just past the ridge, a well-built trail leads from one of these beaches to the cliff dwelling; both even appear on the USGS topo. Though we had the ruins to ourselves for the moment, two parties of rafters were disembarking on the beaches, while more streamed by along the river. As we later learned, this is a well-known landmark and popular stopping-point for those visiting the canyon by raft. 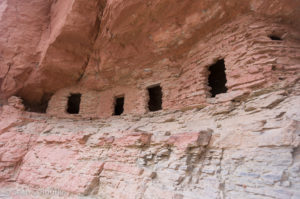 Ruin-wise-speaking, we had visited Nankoweap and Grand Gulch in the wrong order: buildings that might have impressed me a few days ago seemed mundane compared to what I had recently seen. Still, it was interesting to note the different levels of lintel technology in adjacent dwellings, with some individuals having a better grasp than others of this important building technique. The inhabitants seemed not to have mastered arches; then again, given the abundant flagstone-like rock, they had no need.

Seeing a herd of rafters approaching, we beat a hasty retreat, passing a line of people in mediocre hiking shape on our return. Having time to kill, we headed to the less crowded-looking of the two beaches, planning to rinse off in the river. However, with high clouds directly above, the air and water were too cool for more than a brief foot-rinse. 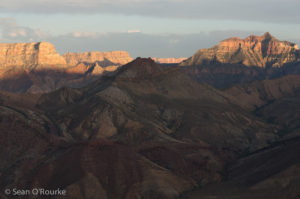 As we photographed (me, easy) and painted (her, less so) the surroundings, a couple of the rafters approached to chat. Our different frames of reference made talking about the canyon difficult: where they dealt in miles along the river, I thought in trailheads. The raft-folk seemed friendly enough, even offering dinner and use of their “groover,” and I was tempted to laze around for a few hours, partake of their board, and try to interact with humans before shuffling back to camp. Renée was not so inclined, and I soon found my self psyched about her plan to hike back out the same evening. Doing so somehow seemed truer to my nature, and I could probably use the fortifying hours of evening headlamp time.

We dumped and replaced our water at the spigot, shoved the camping gear back in our packs, and took off for the rim in cloudy, comfortable conditions. We reached the water cache surprisingly quickly, and I laughed at the absurdity of pouring out three of the quarts I had lugged all that way. I knew the Supai traverse would feel long on the way up, and doing the last two thirds by headlamp made it feel even longer, especially with no moon. However, I underestimated the long slog from Saddle Mountain to the trailhead; though it is all “along the rim,” it gains 1,200 feet over several rolling miles. We finally reached the cars at some ungodly time near midnight, where I diligently resumed my sleep deprivation training.

Cliffs across from Nankoweap Creek

This entry was posted in Arizona, Backpacking, Tourism. Bookmark the permalink.