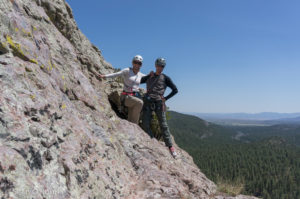 [Lately I have been too busy doing things to write about them. Let’s see if I can catch up.]

Though I have spent more time in northern New Mexico more than anywhere else, it has usually been during non-climbing periods, so I know little about the local crags. It took a visit from an eager out-of-towner to make me acquaint myself with the area. I met Renée as a friend-of-a-friend while ice climbing in Ouray this winter, and she somewhat misguidedly looked me up as a partner and source of information on the southwest part of a whirlwind dirtbag tour of the west. Fortunately she had done her research, so after dinner in Santa Fe, we drove up through the little town of El Rito, and camped a short way off the dirt road to a nearby trad cliff. 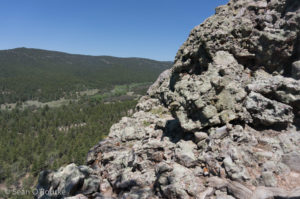 This being truck-accessible public scrub-land near a town, we woke to the usual collection of junk — old carpet, CRT monitor, toilet seat — as well as an unusual pair of sheep carcasses. We ignored the detritus while eating and sorting gear, waved to some locals, then drove the rest of the way to the crag. Though the road supposedly required a high-clearance 4WD, my Element had no trouble with a bit of careful driving. After a 5-10-minute walk through open woods, we were at the base of the crag. The El Rito crag consists of mostly solid, generously-featured conglomerate rock, with enough cracks and bushes to allow trad protection. 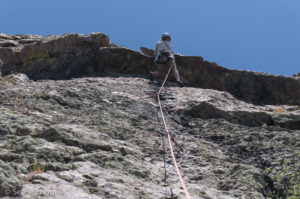 As this was my first trad climbing in almost two years, I happily started off on a mellow 5.7 and gave Renée the first lead. After failing to do anything terminally stupid while belaying and following, I led the easy second pitch to the top. After enjoying the view of fields and cows to the northwest, we jogged around the walk-off to try the next route. I led the first 5.7 pitch, with protection consisting almost entirely of slung shrubbery. The second pitch was a bit more interesting, as the face steepens below a roof, thoughtfully protected by a bolt that can be clipped from below.

After walking around again, we scrambled a 5.3 on the right-hand side, curious why it had three stars in the guide (PDF). Though I would not give it maximum stars, it was fun enough, as was another small tower above it, and the right-side walk-off was not nearly as bad as the guide suggested. Overall, El Rito is fun climbing with easy access and camping, well worth checking out if you’re in the area. 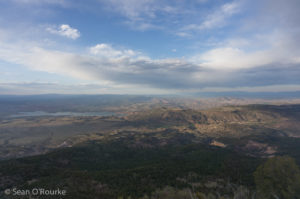 With daylight to spare, we decided to tag Coyote Butte, a.k.a. Cerro Pedernal, a small but notable peak between the Jemez and Abiquiu Lake. We stopped by the surprisingly nice El Rito library (a converted WPA-built school) to look up the route, then drove toward the town of Coyote, and followed a good forest road to a bad one leading toward the peak’s south side. Here I felt my new car’s inferiority, and was forced to park partway up before suffering an unplanned oil change. Renée’s truck got us a short distance farther, where the road seems to turn into a rutted ATV track.

From here we bush-whacked straight toward the center of the butte’s broad south face, finding an occasional cairn. As we approached the face, we easily spotted a cave mentioned in the route description, and found a well-worn and -cairned trail leading up the brief third class scramble to the top. Coyote Butte is a long, narrow mesa tilting slightly up to an open summit on its western end. There we found a summit register and excellent evening views of the Abiquiu area and southern Sangres beyond. We chilled and got chilled a bit, then returned to a convenient campsite along the road. 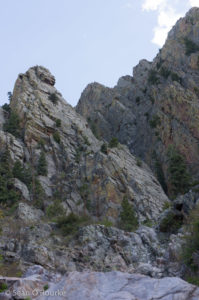 Despite a less-than-perfect forecast, we headed slightly north to climb a long, moderate route on the Brazos Cliffs, one of the largest face in New Mexico. We discovered along the way that, contrary to what multiple maps say, NM 573/162 does not connect US 84/64 to the Brazos Road. Instead, it dead-ends at a river crossing — and more dead sheep.

After fixing that mistake, we found the parking and approach without much further trouble. The approach starts off through summer cottages, then follows an old forest road before climbing and traversing through the woods to the base of the cliffs. It is easy to follow on the way out — just go to the end of the road, then head toward the huge crag — but somewhat trickier on the return, as the route is sparsely cairned and apparently seldom traveled. 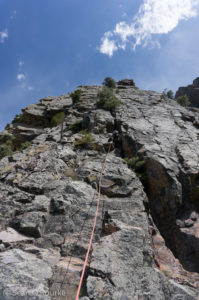 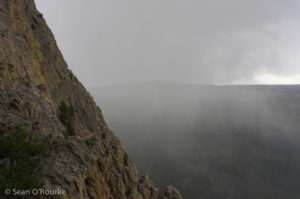 There were some clouds to the south and west, but nothing directly overhead, so we roped up to simul the first two easy pitches. Though the climbing was not too hard, there was not much obvious protection: Renée placed something like two pieces in the first 50 meters. When we eventually regrouped at the top of P2, a ledge with a large tree and a slung log, the weather seemed to be deteriorating. We dithered for a few minutes, reluctant to abandon the climb, before a flurry of graupel and snow made up our minds. As mentioned in the route description, Brazos rock becomes extremely slick when wet. Had we started later, we likely would have had to either wait out the weather or donate more gear to the crag; as it was, we lost only a sling, a cordelette, and two carabiners on the retreat.

With unsettled weather all around, the rest of the day was best used driving on to the next thing. So much for the New Mexico part of my season.

Looks fine to the west?

This entry was posted in Climbing, New Mexico. Bookmark the permalink.