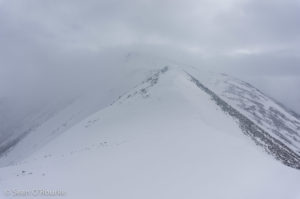 Cottonwood is the northernmost 13er in the Sangre de Cristos, which bound the San Luis Valley to the east. After killing a day in Buena Vista while it continued to storm in the mountains, I ignored the forecast to camp at the Hot Springs Canyon trailhead. Since it wasn’t actually raining or snowing when I woke, I started up the trail, glad to be wearing running shoes after so many days in damp boots. Though it is called Hot Springs Canyon, a sign at the trailhead helpfully points out that all of the springs are on private inholdings; presumably, you get shot for swimming without permission. 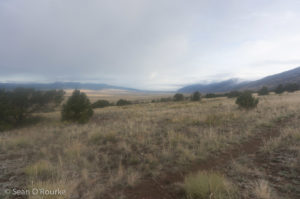 It had snowed about an inch the night before, and between that and older snow, the trail was often a stream. It remained cloudy, but there was only intermittent, gentle snowfall as I made my way up-canyon through the pines and aspens. Above a clearing near 10,000′ I started running into old snow, and as the trail climbed, I had to avoid or wallow through a few slush-drifts. I had brought snowshoes, but the snow-cover was not consistent enough to justify putting them on. 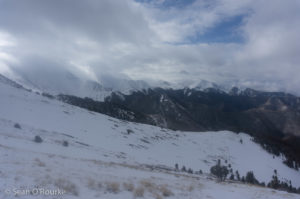 As the trees thinned near Cottonwood’s west ridge, the trail disappeared and I made my way up the old-snow-free west-facing side of the canyon, reaching the ridge near a minor rocky bump. I was treated to a view of the striated peaks around Adams below the cloud deck to the south, and a possible old rock glacier to the north. It even seemed like I might see the sun. 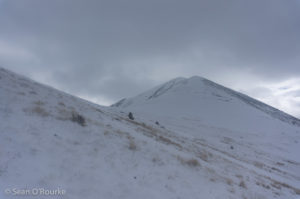 The snow on the ridge was wind-packed enough that I rarely postholed, but soft enough to kick steps, and I made good progress to the false summit. From there, I got a brief glimpse of the true summit before the wind picked up and the clouds returned. While it is possible to make a loop of the climb, tagging an unnamed 13er to the south before dropping to the Garner Creek trail, I could see nothing, so I returned the way I came, reaching the car around noon.

After lunch, I spent some time at the homey coffee place in Moffat before continuing to the Cottonwood Creek trailhead near Crestone to try my luck with the forecast once again. Sadly, things looked bleaker than I could handle when I woke, so I simply went for a quick run up to the snowline before heading south. After a painful interlude to race a 50k, I will return to the wilderness next week.