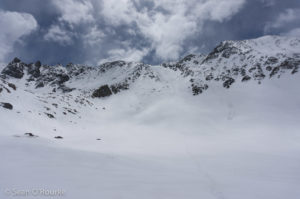 With the forecast calling for yet another day of mixed weather, I headed north for the snack-sized peaks of the Tenmile range between Leadville and Fairplay. Most of these peaks can be climbed from either side with a similar amount of effort, from trailheads between 10,000 and 11,000 feet. Though avalanche season is more or less over, prevailing winds make the west side safer. After checking out my options, I decided to climb Fletcher via its northwest face from Mayflower Gulch, a trailhead I have previously used for Pacific, Crystal, and Atlantic. 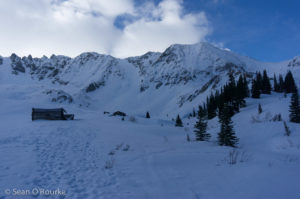 Fletcher and Drift on approach

I went to sleep in the parking lot in a snowstorm, and woke to a cold morning and a dusting of fresh snow. While the colder temperatures were good for snow conditions, it took me longer than usual to make a hot breakfast in my sleeping bag and extract myself from the car, and I did not get started until 7:15. No big deal — Fletcher is only about 3 miles and less than 3,000′ of gain. I left my snowshoes at home, and was pleased to find not just a well-packed path to the Boston Mine, but a supportive crust in the open terrain above. 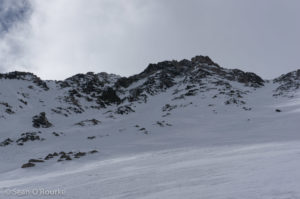 Approaching Fletcher’s northwest face, I debated which of two similar-looking couloirs I should follow. The left-hand one looked snowier, easier, and less direct, while the right-hand one had an obvious rock finish, but apparently led directly to the summit. Reaching the base, I encountered more breakable rain crust over sugar, which was annoying but far better than the previous day’s slush.

I debated my couloir choice while putting on my crampons, then decided that I wanted both more challenge and less snow, and headed right. It might or might not have been the “Black and Tan couloir” whose route description I had found, but either appeared to go. I managed to keep the sun just below the ridgeline to my left as I front-pointed up the snowy part of the couloir, and it was cool enough to climb at full effort in my shell and heavy gloves. Though I found occasional névé, most of snow continued to have a breakable, supportive crust, so climbing was slightly inefficient, but it was easy to find a rest stance. 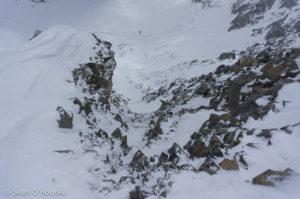 Reaching the mixed finish, I began to question my judgment. The underlying “black and tan” (black and gray, really) rock was mostly garbage, and the solid bits often sloped outward or lacked cracks in which I could wedge a crampon point or ice axe point. Much of it was covered with a layer of thin ice and sugary snow that rarely provided a solid stick or plunge. It may have been only class 3-4, but it has been awhile since I did this sort of scrappy climbing in crampons and gloves, so I made this short stretch look hard and sketchy. 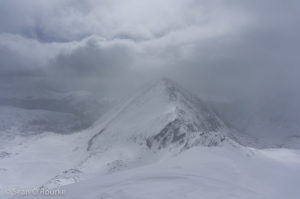 Topping out, I found myself in the sun a short ridge-walk below the summit. Following a boot- and ski-track for the final stretch, I found the summit surprisingly calm and pleasant. I checked out the neighboring peaks, but saw no fellow mountaineers, not even on nearby Quandary. There must have been people on this easy fourteener on a nice spring day, but perhaps not a summer-sized crowd. 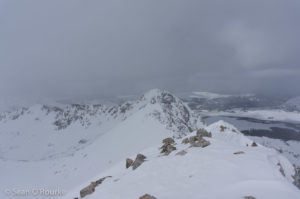 With plenty of day left, and the weather behaving itself, I decided to traverse over to neighboring Drift Peak, which was supposed to be fun third class. After an easy walk down to the saddle, Drift’s gendarmes provided some route-finding challenges. I was forced to backtrack twice descending the last one, eventually finding a path down the south side, then back toward the ridge via a step-around to a ledge system. After that, it was easy going to the summit, where I found another old boot-pack. 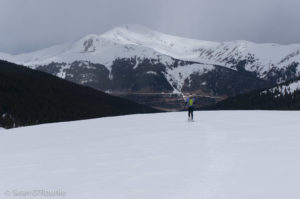 I took off my crampons, then made my way down the broad, snowy north face. This would have been a good ski, but I am not a skier, so I contented myself with some plunge steps and a long sitting glissade. Dropping through the lower cliff-band via a steeper chute, my ill-advised glissade forced me into an awkward, powdery self-arrest; after that, I plunge-stepped. After boot-skiing the final slope to the valley, I passed a couple of snowshoers on the still-supportive crust, then met several AT skiers getting a late-morning start. 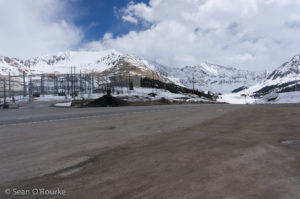 Reaching the car around noon, I had a hot lunch and thought about what to do with the rest of my day. The weather remained basically decent, and I should have tagged Clinton Peak on my way back over Fremont Pass, but tromping up to an unremarkable summit right above a hideous molybdenum mine did not appeal, so I instead retreated to the Leadville coffee shop, which is open Sundays (!). Maybe I’ll come back for Clinton from the other side, where I won’t have to see the mine until the very end.

Fletcher and Drift on approach

Pacific and Fletcher from Drift