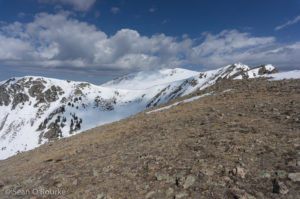 I had originally meant to hike Lobo Peak near Taos, but the trailhead camping looked bad, and the peak too easy, so I continued through Questa to a nice, quiet spot at Cabresto Reservoir. This is not just a nice place to camp, but the trailhead for Venado and Latir, two 12,000-foot peaks within shouting distance of Colorado. Like North Truchas, I had tried to do these two during a previous winter, only to be turned around by bottomless slush, so a bit of vengeance seemed in order. 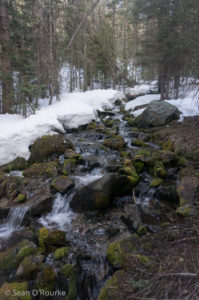 Waking to gray skies, I figured out a better way to attach snowshoes to my pack, then set of more quickly than I had the day before. After rounding the reservoir at 9,200′, the trail climbs consistently along a creek leading to Heart Lake. I started hitting intermittent snow around 10,000′, but it was still firm in the morning, and I continued without snowshoes as I turned onto the Bull Creek trail, which climbs to the 12,000′ saddle between Cabresto and Venado Peaks. I followed ski and boot tracks until the latter gave up in deep snow, then put on snowshoes, lost the trail, and floundered along the path of least resistance through the woods south of Venado. 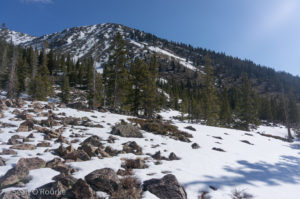 Emerging in a clearing, I saw that the southeast ridge of Venado’s southeast subpeak was both tree- and snow-free, so I ignored the trail to efficiently gain 1,000′. Though I saw no bighorns, this is apparently a popular place for them to hang out, as evidenced by the carpet of their dung covering parts of the ridge. I crossed the subpeak, then put my snowshoes back on for the final climb to Venado’s summit. 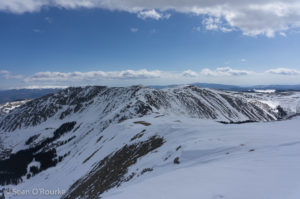 I had thought of hanging out on top for awhile, or possibly making an out-and-back trip to nearby Virsylvia, but the vicious, eyeball-freezing wind immediately changed my mind. Instead, I continued as quickly as possible along the so-called trail toward Latir, then left it for the summit at the north end of “Latir Mesa.” (Latir is not really a peak, but just the high-point of a rolling alpine plateau stretching northwest to southeast for over a mile.) 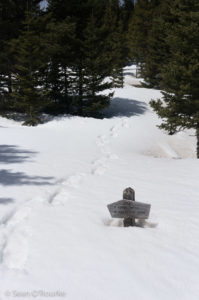 Latir’s summit was once again too windy for comfort, so I followed the line of large cairns marking the supposed trail to where it drops down a cirque toward Heart Lake. I played hide-and-seek with the trail for awhile, finding a buried sign and some blazes on trees, then followed it more easily as it descended to shallower snow, finally taking off my snowshoes just above the Bull Creek junction. With my new attachment method, I was even able to comfortably jog the descent to the reservoir, arriving with plenty of time for more fish and a long drive up into Colorado.

North to Culebra and Blanca from Latir