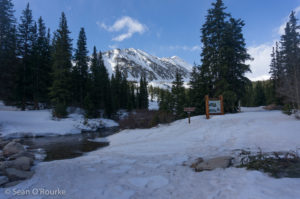 Cronin is a nothing-burger peak west of Antero, accessed via Baldwin Gulch. Later in the season, a climb would be accompanied by the constant noise of jeeps enjoying one of the highest 4WD roads in the country. However, with the road still blocked low down by snow, the back-country was quiet. With a dubious weather forecast, I was looking for a half-day peak, and Colorado’s 75th highest fit the bill. 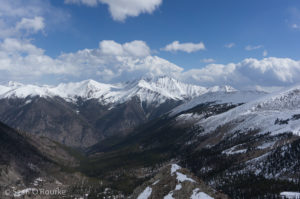 Waking at the base of the jeep road, I made myself a hot breakfast in the car, then got started up the road around 6:30. I had last been this way in late May 2010, driving the then-dry road in a more capable car than I have now. I passed the road-walking time listening to some saved-up podcasts, then put my snowshoes on at the Baldwin Lake junction, where the snow became continuous and Cronin loomed above to the south. The route description for Cronin’s north ridge said to leave this road about a mile from the junction, so I picked a likely looking spot and set off through the woods. 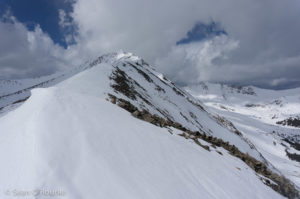 One miserable slog later, I reached open ground near the toe of the ridge, and took off my snowshoes for the lower section that was scoured almost completely dry. The ridge was easy going, with what might have even been a faint use trail in places, and I made good time as I watched clouds approach from the south and west. Higher up, the ridge was once again covered in soft snow, so I tackled the final part with snowshoes, suffering for my lack of acclimatizion and fitness. 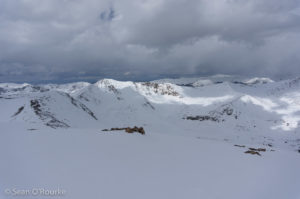 With better weather and/or a bit more motivation, I would have continued to neighboring Grizzly Peak, at the head of the valley, but I instead dropped straight to Baldwin Lake, then picked up the other road back to the junction. It had been a warm night and a warmer day, and the snow, barely supportive in the morning, was becoming unpredictable bottomless hell-slush. Step, step, step, sink-knee-deep, curse, repeat. 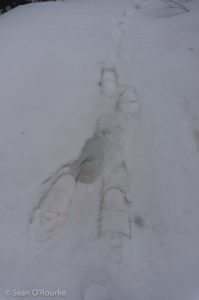 I spotted another set of tracks below the junction, and soon met their maker, a “kid” from Minnesota out on a weekend scouting trip. (I say “kid” because he looked young to my middle-aged eyes, but he was actually in his late 20s with a wife, kid, and career. Yikes.) He definitely looked the tourist, with loafers and a camera strapped around his neck, but handled the slush-drifts without complaint. We talked for the remaining hike to the car, and I tried to suggest a few quiet places he could camp with the family — “avoid 14ers and jeep roads” — but his interests and Minnesota background are alien enough to me that I was probably of little use. After fish, it was time to head north to the next mediocre-weather objective.

Princeton and Antero from Cronin

Shavano and Tabeguache to the south