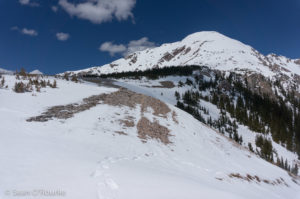 Out of the house, into the car, and up the road north: so begins another season.

The Truchas Peaks are the most rugged and remote section of New Mexico’s tail end of the Rockies. I snowshoed Middle and South Truchas a couple of years ago, and was completely shut down trying to ski North Truchas last winter, so I decided to finish it off as my first act of 2016. The shortest route is about 25 miles round-trip with 4100 feet of elevation gain, mostly on a well-maintained pack trail. In early May, however, the last half of the trail is completely buried in snow. 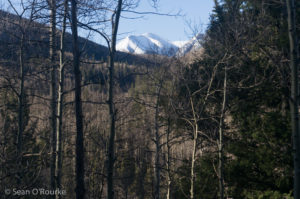 After a quiet night at the Santa Barbara trailhead, I got a leisurely start around 6:30, hiking along the Santa Barbara River with snowshoes flopping awkwardly on my pack. The trail soon enters a narrow canyon, with sharp rock buttresses rising to the west. North Truchas’ eastern neighbor Chimayosos Peak comes in and out of view at the head of the canyon, as the trail slowly gains elevation along the river’s eastern bank. 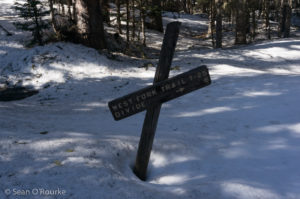 After a bit of confusion at an intersection, I continued up the west fork trail, passing several campsites and crossing a couple of large meadows. Near the head of the canyon, where we had been turned around by unconsolidated snow when skiing last year, I found that the trail crosses to the west side and doubles back a short distance down-canyon before switch-backing up the steep west slope to No Fish Lake. The lower switchbacks were intermittently snow-covered, but the snow was hard enough to make snowshoes unnecessary. Higher up, it became softer and continuous, forcing me to finally put on snowshoes as I awkwardly side-hilled up the buried switchbacks. 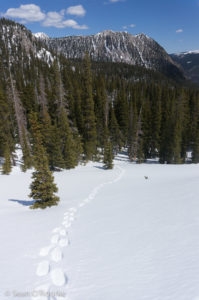 I lost the trail in the woods where the valley flattens out below the lake, but had little trouble making my way through the woods toward the Chimayosos-Truchas saddle to the southwest. I thought I saw a couple of bighorns near the saddle, but nothing but droppings of indeterminate age when I reached the sign. The final climb to Truchas had been blown partially snow-free, so after snowshoeing through some krummholtz, I picked my way up the steep grass in running shoes before snowshoeing the final 100 feet to the summit. 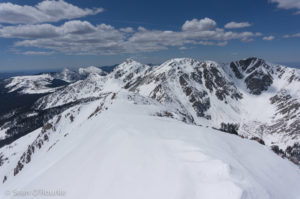 After taking in the view of the other Truchas Peaks and Pecos Baldy to the south, and the Taos-area peaks to the north, I thought about tagging nearby Chimayosos as well, but decided to take an hour-long summit nap on this calm, warm day. I had felt painfully slow on the final climb, and guessed that Chimayosos would take longer than it looked like it should. The snowshoe back was mostly uneventful, though the snow-and-log bridge I had crossed in the morning had softened enough that I repeatedly broke through to the log, and once to the stream. Whatever — my feet were already soaked, and the day was warm.

At the trailhead, I finally met the only other soul I had seen all day, a fisherman checking out the river and apparently leaving empty-handed. I prefer not to leave my fish to chance: in less than five minutes, I had pulled out a can and spread it on a couple of tortillas for my first traditional summer meal. On to the next one!