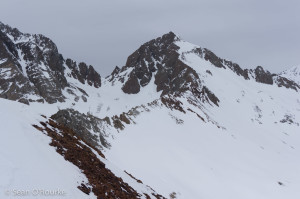 Gladstone Peak, between the Wilsons near Telluride, is a shapely pyramid from most directions, which unfortunately has a reputation for horribly loose rock. Having first seen it from Mount Wilson way back in 2009, I next saw it from Wilson Peak in 2010, but was put off by the loose rock. With a dwindling list of peaks to do in Colorado and some unseasonably-warm weather settling down the avalanches, it was finally time to try it in the snow. 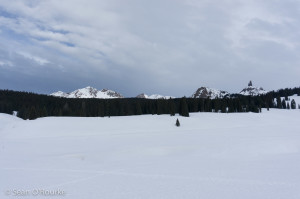 From what I could dig up online, the best winter approach would be via the Cross Creek Trail near Lizard Head Pass. After finishing up the roundabout drive in the morning, I destroyed half a bag of Chex Mix for breakfast while changing into my winter clothes. I took in the panorama of peaks, from Mount Wilson to Lizard Head, then took off up a nicely-packed snowshoe trail. I was lucky that someone who knew the trail had preceded me, as I would otherwise have been hopelessly lost in the woods following a buried trail up an invisible creek. The beaten path ended abruptly in a clearing with a view of nearby Lizard Head, a chossy volcanic plug that is perhaps Colorado’s most difficult 13er. 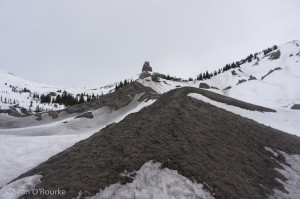 Unsure of the best route from here — a common situation when climbing Colorado non-14ers, especially in winter — I headed toward the saddle between Lizard Head and Cross. After eyeing the terrain, I dropped through a ravine full of volcanic debris that looked like mine tailings, then snowshoed up toward a rib on Cross’s south face, which the wind had scoured down to the underlying scree. I though walking on bare ground might be faster, but was mistaken, and booted up bits of crusty snow to the summit. 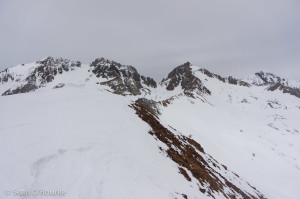 Reaching the summit, I saw that I had a more difficult day ahead than I had anticipated. Rather than being a long walk, the ridge connecting Cross to Gladstone is a serrated mess of rotten rock and gendarmes, with occasional knife-edge sections. After an easy start, I began to encounter occasional bits of class 3 getting over or around various obstacles (usually to the southwest or left). While high, thin clouds hid the sun, it was warm enough and mercifully calm, so I was still enjoying myself. However, not having expected much scrambling, I had brought only liner gloves and overmitts, and was unhappy putting so much wear on the fragile gloves. 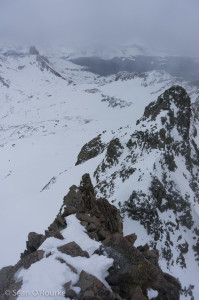 Things continued to get harder as I neared Gladstone, with some apparently class 4 steps, knife-edges, and one narrow section of ridge that completely collapsed as I desperately scurried to safety. Near the final climb, the rock surprisingly turned to something like good granite, with some fun class 3-4 climbing to where the ridge joins Gladstone’s west face. Picking my way up a mixture of rock, sugar snow, and rock-hard windboard, I eventually reached the summit in overcast but moderate weather. 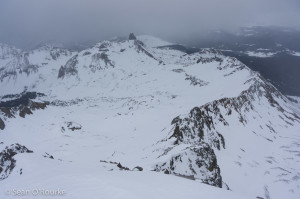 Taking in the views, I saw that the easiest route would be through the col between Lizard Head and Cross, then up Gladstone’s west face. I took off my pack to enjoy the pop-tarts I had been saving, and was dismayed to find that my snowshoes had broken a buckle on my pack and liberated them somewhere on the slopes below. I ate half of a frozen apple instead, threw the rest away, then headed down the west face. This would normally be a terrible place to be in avalanche season, but previous dry and warm days, plus today’s cloud cover, were keeping everything in place. The return was much faster and easier than the climb, and I reached the trailhead with plenty of time to drive around to Ouray.

Wilson and El Diente from Gladstone