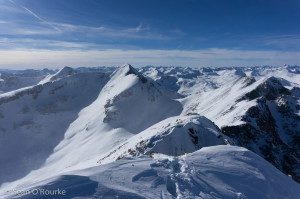 Because some friends were visiting Ouray, and thanks in part to Scott’s generous boot sponsorship, I recently took a quick trip to southwestern Colorado for some winter mountaineering-related program activities between storms. Since I have limited patience for roped climbing of any sort, and am mostly an aerobic athlete, I decided to add a bit of peak-bagging to the ice-cragging. After considering various things on my to-do list, I decided to tag Jones and “American,” two nondescript high 13ers near Silverton, the former one of Colorado’s highest 100. 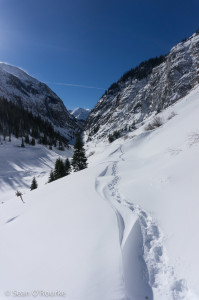 Leaving home at the ungodly hour of 3:30, I sped the boring hours to Durango, then tested out my car’s anti-lock brakes on the snow-packed turns between Purgatory and Silverton. After passing through the scenic and mostly useless town, I continued up the Alpine Loop along the Animas River to where plowing ends at Eureka. I stuck my head outside the car, quickly retreated to put on more warm clothing and cram down another egg sandwich, then started snowshoeing up the road toward Cinnamon Pass around 9:30. I might have been traveling the Alpine Loop, but I was not crazy enough for an alpine start. 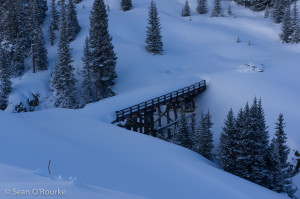 After much slogging, I passed a bridge leading to the possibly-still-active mine at the head of Burns Gulch, then cluelessly continued on for a quarter mile before crossing the Animas on a snow bridge and climbing a slide path to reach the jeep road. Beyond the end of the road, the valley splits around Jones Peak, the south fork leading to the saddle between Jones and Niagara, the north to the southwest corner of American Basin via a long, rolling talus field. The talus was all well-covered in snow, but the rolling terrain still made for an exhausting slog through the heavy powder. 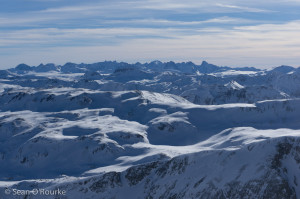 Nearing Point 13,744′, I took off my snowshoes where the wind had scoured the talus nearly clean, then stashed them in a sheltered spot before taking the detour west to tag American. There appeared to be a trail marked by wooden stakes under the snow, but the best path was dictated by the haphazard drifts. Though I sometimes sunk hip-deep, I was better off neither wearing nor carrying my snowshoes, since they would have been awkward worn on the talus, and would have acted as a sail on my back in the freezing crosswind. Realizing I had left my goggles in the car, I “enjoyed” the views for all of about 10 seconds before retracing my steps. 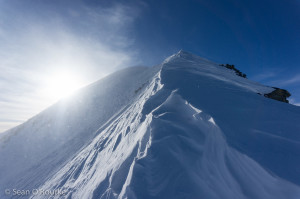 After a brief panic searching for my snowshoes by the wrong rock, I found them and continued south to Jones. The ridge was probably class 2 in dry conditions, but with cliffs and wind keeping me off the west side, and deep snow making the east unappealing, I ended up on a mixture of class 2-3 rock and unpredictably deep snow near the crest. Too much cursing and muttering later, I reached Jones’s summit just after 4:00 PM. The wind, which had been whipping spindrift off the surrounding peaks all day, seemed to be intensifying toward evening, though I was still reasonably comfortable in the sun. 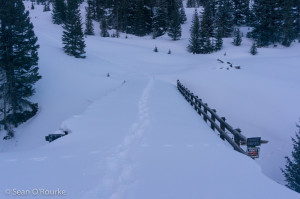 I had enough daylight to continue to Niagara, and moonlight to see me home, but I decided I had had enough. I dropped down Jones’s southwest face to the southern branch of Burns Gulch, eventually rejoining my old snowshoe tracks, then taking a shortcut down the main gulch toward the mine at its mouth. This route proved uneventful other than a slide down a short snow-step, and I soon crossed the bridge and rejoined my tracks on the Alpine Loop. I had hoped that the waxing moon would allow me to reach the car without headlamp, but it rose late in the canyon, and I gave in to common sense about 30 minutes from the car. Sufficiently tired, I changed out of my snow-caked boots, then drove around to Ouray for a cold night in the car.

Down Animas toward Eureka

Wetterhorn, Uncompahgre, and Handies from American