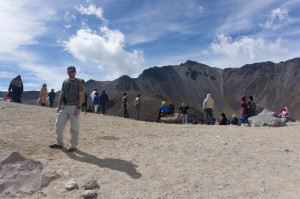 Since climbing Mount Whitney, I have wondered how I would feel at higher elevations. For someone living in the lower 48, by far the cheapest and easiest way to find out is to visit the volcanoes around Mexico City. Other options within the hemisphere, such as the Andes and Alaska, require some costly combination of gear, permits, and transport. Like Starbucks drinks, Mexico’s volcanoes come in a variety of sizes, the most common being Toluca (15,350′), Iztaccíhuatl (17,154′), and Orizaba (18,491′). We chose to sample them in that order.

After our land attack this spring went off course, Mike and I decided to try again by air. While significantly more costly, this approach would be less likely to end in a barrio garage. With Mike’s friend and fellow pro mountain biker Cameron along, it even became affordable to rent a car. Because of Mike’s full-time job and airline pricing policies, we landed in Mexico City at 11:00 PM on Christmas Eve. After retrieving our bags, we rousted the rental car lady, and were on the road out of Mexico City by around 1:00 AM. The City is famous for its lawless gridlock traffic, so despite our bleary eyes, we considered ourselves lucky to be driving to Toluca during what had to be some of the least-crowded hours of the year. We checked into what claimed to be a Best Western around 2:30, and immediately passed out. 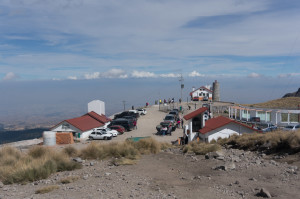 A morning shower would have been nice, but the room had very little running water, none of it hot, so we took off grimy for Nevado de Toluca, visible above the smog to the west. After our GPS led us on a scenic tour through a slum and a dumping area on some dirt roads, we eventually reached the highway and the nicely-paved byway. Shortly after passing through a town around 11,500′, we turned onto the rough 2WD dirt road up the volcano. After paying the entry fee (40 pesos), we continued our slow progress up to the hut at 13,800′. We could probably have driven on to the crater itself, but we were bored with the slow drive, so we parked with the other 40 or so cars on the side of the road, and followed the line of Mexican tourists up the wide path to a saddle to the south. 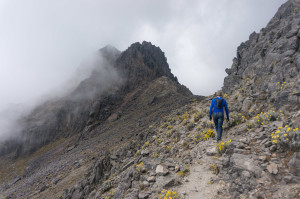 From there, the sporting route follows the crater rim over a slightly lower northeast peak, but my partners are not fans of unnecessary work, so we followed the crowd down across the crater, passing between the rather unattractive Lago del Sol and Lago de Luna. For unknown reasons, most of the tourists had stopped at the saddle or climbed the lower Arista de Humboldt, and the remainder seemed content to play around near lakes, so we were alone as we climbed a sandy path to the south rim of the crater. After some boulder-hopping and even a bit of fun third class scrambling, we reached the summit in near t-shirt weather. 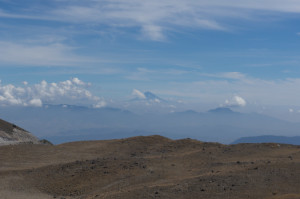 We checked out the view of Popocatépetl and Iztaccíhuatl rising across the smog-lake of Mexico City, then scree-d down a gully we had passed on the way up, quickly reaching the Lago del Sol. We passed hundreds of people of all levels of fitness on our way back over the saddle to the road, most out for a casual stroll and picnic with kids, dogs, food, and drink. The road had turned into classic Mexican road chaos: parking had extended perhaps a half-mile down from the hut, and the remaining 1.5 lanes of dirt had to support both two-way traffic and a steady stream of pedestrians meandering obliviously among the gridlocked cars. We had plenty of time to reach Amecameca, so I did not mind the delay, and enjoyed learning how many people can fit in various types of car we passed (over a dozen in a VW bus). 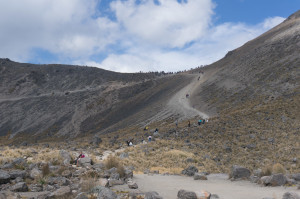 Back on normal roads, we were mostly lucky in our drive through the awfulness of Mexico City, spending only about 15 minutes weaving through what looked like a spontaneous street market. By day, the smog and sprawl were oppressive. Being an international metropolis, Mexico City has its share of corporate skyscrapers, warehouses, and stores, but its defining feature is the barrios that spread over the rolling terrain like a concrete fungus. One- and two-story buildings are stacked wall-to-wall, roof-to-floor, fed by narrow streets. Most have unfinished upper stories with rebar sticking up, apparently a tactic to avoid paying taxes by remaining perpetually “under construction.”

After stopping for dinner on the eastern edge of the city, we continued to Amecameca, at over 8,000′ near the base of Popocatépetl, where we randomly chose a surprisingly nice and affordable motel. It even had a zillion channels of cable, so we were able to learn a bit of Spanish from the subtitles of one of the most deliberately awful American movies ever made. Having survived 15,400′, it was time to see how it felt to go a bit higher.

Rock-hopping up the ridge

Scree down to the crater