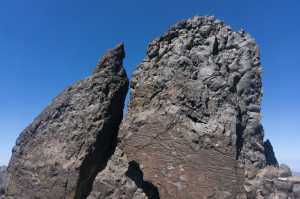 After having seen Anderson from Cruiser, I had planned to climb it today, but waking at 4:00, I did not feel up for a 40-mile, 7,000-foot day, so I went back to sleep and did the shorter Constance instead. Constance, another of the Olympic Fauntleroys (again, seriously), was reported to be a choss-slog, but with a much shorter approach than Anderson from the same Dosewallips starting point. It has the same standard approach as other eastern Olympic peaks, but with a twist: the “climb to a lake” part follows the steepest official trail I have ever seen, reputedly gaining 3,400 feet in just two miles. With sections of arguably exposed third class, I am curious if guides short-rope their clients on the trail. 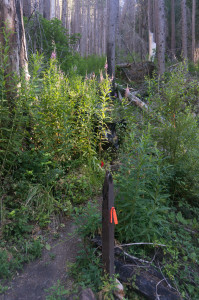 I started at a civilized hour, covering the washout bypass and subsequent road miles at a purposeful walk instead of the jog I would have used for Anderson. Someone had knocked the sign for Constance Lake off its post, but the junction was still obvious, the trail well-flagged and surprisingly maintained, a chainsaw having been applied to some fallen logs in the last couple of years. The first part of the trail climbs straight up through a burned area, with plenty of loose rocks, slippery dirt, and deadfall, but also food (sweet blackberries this time). This south-facing climb was already uncomfortably warm, but fortunately the trail enters unburned woods after maybe 1,000 feet of gain, where it eases off to a steep but sane grade. 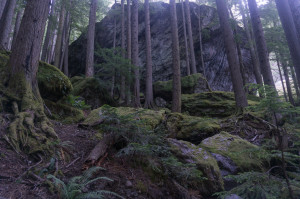 Crossing an open, brushy area near the stream, I met a young obviously military couple (buff guy, both wearing drab-flag caps) on their way to camp at the lake and do Constance as a two-day climb. Though I quickly left them behind, I was impressed with their pace up the steep trail with overnight packs. Above the open section, the trail returns to crazy-grade, including the sort-of third class sections, though it remains blessedly shady. I passed another group of climbers on their way down, then reached the lake about an hour and a half after leaving the road. 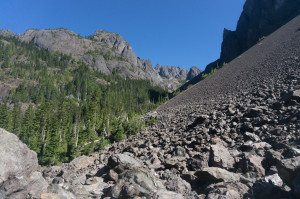 The route to the peak (part cairned, part seemingly an old trailbed) head up-valley from the northeast corner of the lake, but I first mistakenly continued around through the campground, cluelessly blundering into someone’s camp before returning to pick up the correct route. The talus and scree, more of the dread pillow basalt, can be horrible on the wrong line, but good travel can generally be found either along the old trail or on the large, stable boulders in the center of the ravine. 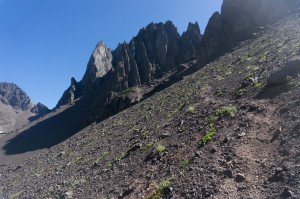 The route leaves the ravine at the “obvious” place near a pothole, following either boulders and turf (up) or sand and scree (down) to a saddle well south of the summit. There was some University Pass-level suckage on this part, but not as much as I had expected, and I distracted myself taking pictures of the steep, lumpy basalt fins to the north as I ground out the climb. 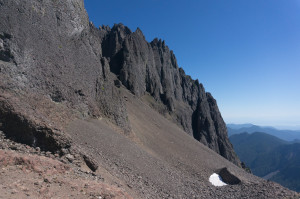 After reaching the col, I descended on a bit of trail, then made my way north up the edge of a broad scree-field, eventually crossing another gap from which the summit was finally visible. Though I had gained most of the necessary elevation, there was still some work to be done weaving around and over the narrow, jagged ridge. Staying east of the ridge, I descended a small lingering snowfield, then climbed to an exposed ledge leading around a blind corner and down to the “Finger Traverse,” a hand-traverse along the top of an exposed slab leading around a pinnacle with a vertical north side. 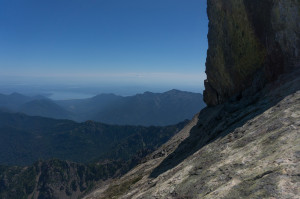 Past the finger traverse, the most direct route would have been to descend and cross the top of a talus-bowl to the east, then make a sloping climb to the plateau below the summit. Instead, I tried to be clever and follow a series of ascending and descending ramps along the west side. I found easy travel and a few cairns, but it wasn’t worth the extra distance; I followed the direct route on the way back. From the final plateau, the summit looks like a pair of inaccessible pillars, but fortunately a talus-ramp around back leads to the short side, only a few 4th class moves high. 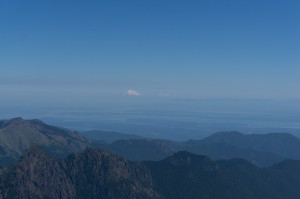 After again tangling with the summit flies, I found a tolerable seat a safe distance away; as much as I wanted one, the rock is not conducive to summit naps. I chillaxed as much as I could given the flies and uneven ground, then retraced my steps. Once past the traversing section, things went quickly, with more of the scree skiable than I had expected. Below the lake I started meeting a handful of people, mostly shirtless military-looking young men, probably from Fort Lewis. The final hike down the flat old road was almost crowded, with all sorts of people out for a Fourth of July stroll. The trailhead/”campground” was a bit of a scene, but I was headed into a day off, so I curled up in an out-of-the-way corner for another night.

Peaks across the way