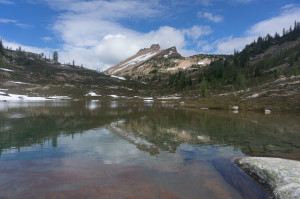 Golden Horn and Tower, two similarly-shaped peaks along the PCT north of Rainy Pass, are among Washington’s highest 100. Both have steep eastern sides, easy western ones, and interesting summit blocks. I had meant to tag both last summer, but ran out of energy after taking the hard way up Tower. At something like 25 miles and 4,000 feet of gain, I though Golden Horn would be another good moderate day before my first serious outing. 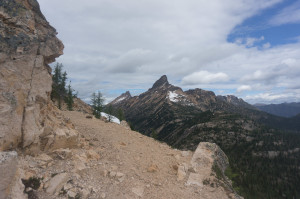 Starting up the PCT at a civilized hour, I hiked the 2,000 foot climb to Cutthroat Pass, then traversed and descended to the oddly-located Granite Pass. While it is a saddle between Pine and Swamp Creeks, the trail passes by rather than going over it, and no sane person would use it as a pass. Continuing along the sweeping traverse to Methow Pass, I left the trail a bit too near Snowy Lakes, picking up the well-established use trail a few hundred yards into the scrub. 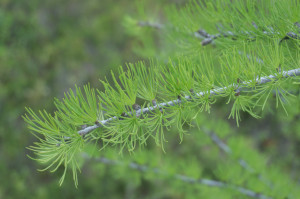 Passing near the lower lake, the scenery was reminiscent of the Sierra, with open meadows and golden peaks; the larches, weird deciduous conifers common to the eastern Cascades. 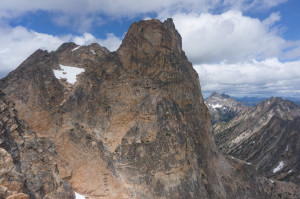 Near the upper lake, I left the remnants of the trail to make a long, ascending traverse over dirt and scree to the ridge southeast of the peak. There were occasional cairns, but not enough traffic to have created a trail. The summit is imposingly vertical from the approach, but the cairned route around to the southwest provides class 2-3 access to the summit block. The true summit is reached by a few quick 4th class moves on the northwest side, “protected” by the inevitable Cascades nest of useless tat. 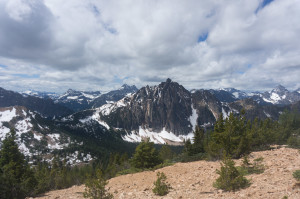 After taking in the surroundings for a bit, including the mis-labeled Mount Hardy to the west, I returned to the trail, jogging the flats to pass the time. At Cutthroat Pass, I was perplexed to find a gaggle of people dressed for a bike tour, helmets and cleats included. They proved to be a friendly group of Canadians, who had apparently ridden down the west side and over highway 20, and were headed back to their igloos in the Great White North via Omak. I took a few group photos, then took off jogging back to Rainy Pass, passing a few backpackers on the way. Snow conditions were similar to what I found in late July last year, confirming my impression the previous day that the hills are dry.