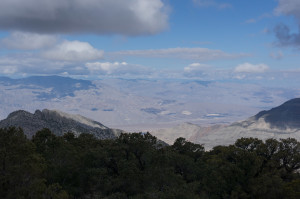 Grapevine and Wahguyhe are two peaks near the Nevada-California border toward the northern end of Death Valley. Bordered by barren Death Valley at 1,000 feet to the west, and the piñon and sage Nevada high desert at 5-6,000 feet to the east, the summit views provide a striking contrast. Grapevine is a frequently-climbed, unremarkable DPS peak with a radio antenna on its summit. Wahguyhe is its less-visited, non-DPS neighbor to the south; the name is an Paiute word, of possibly onomatopoetic origins, meaning “to slide backwards unpredictably in loose talus.” 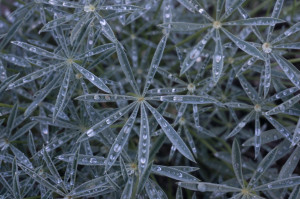 Getting a leisurely start from where it seemed unwise to drive farther up the old dirt road, I followed it the rest of the way to a saddle north of Wahguyhe, and a short distance down the opposite canyon toward Death Valley. Where the road started dropping too much, I turned northwest and up through the sparse piñon forest to regain a ridge. Suspecting that the peak would be non-obvious, I had programmed its rough coordinates into my GPS, and essentially navigated by “IFR” until I started seeing occasional cairns leading toward what seemed likely to be Grapevine. The route continued along the broad undulating ridge, occasionally dodging small cliffs and rotten rock outcrops. 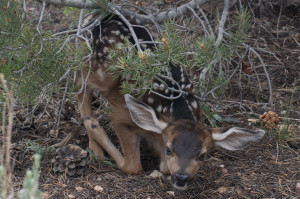 Nearing one saddle, I saw some animal crossing open terrain below, and jogged a bit to see what it was. It turned out to be a young fawn, apparently incapable of either running or hiding, whose “survival” strategy consisted of walking over to the nearest piñon and crouching beneath it. Not seeing an angry mother nearby, I crouched down a few feet away to take some pictures before continuing on my way. It would have made an easy meal or pet, but I had plenty of tuna and little extra room in my car. 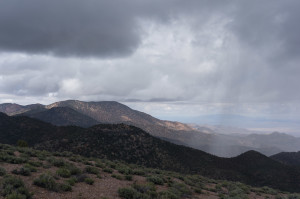 Reaching Grapevine’s summit, I hung out near the ugly radio equipment for awhile, taking in Ubehebe Crater to the west, Death Valley proper to the southwest, and scattered rain showers over Nevada to the east. Then, with less-than-impressive aim, I headed back to the saddle at the end of the road, continuing along the ridge in the other direction toward what I thought/hoped was Palmer, the area’s other DPS peak. This was, in fact, Wahguyhe; Palmer is southwest of the saddle, along another, longer ridge. 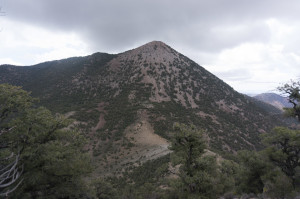 Nearing the final saddle, I was confronted by a disgusting face of loose-looking dinner-plate talus. It was mostly more stable than it looked, but still quite unpleasant in places. Reaching the summit, I turned over the can to discover than I was on Wahguyhe; tagging Palmer would require retracing my route most of the way to the road saddle, then following another long-looking ridge. I should have continued, but the weather was vaguely threatening, and I was running out of patience for desert peaks. It would have been better than the rain, snow, and general wretchedness I found to the northeast… 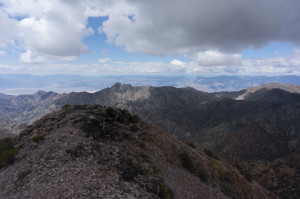 Not wanting to descend the talus-field, I headed east on the ridge for awhile, then bombed down through the woods, finding mostly dirt and pine duff that made for excellent boot-skiing. Minor bushwhacking led back to the road, and a short jog later I was back at my car, pleased to find that my patched tire was still behaving itself.