Ubehebe and the Racetrack 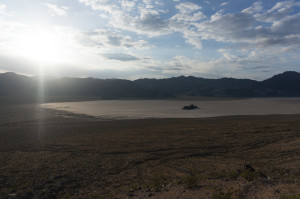 The Racetrack is a famous Death Valley feature, a large dry lake with strangely moving stones. Recent research using GPS sensors and time-lapse photography has shown that the rocks move under light winds while embedded in large, thin, melting sheets of ice during the winter. The dry lake, or playa, has the scaly appearance of a dried-up mud puddle, but is hard enough when dry that walking on it leaves no marks. 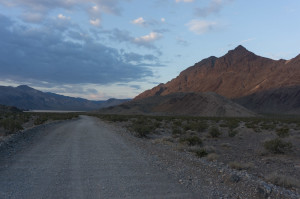 I had read about the Racetrack and seen pictures many years ago, but it was always one of those things that was too far off in the middle of nowhere to visit. Standing on top of Dry Mountain the day before, I realized this was probably my best chance to see the thing. Waking at dawn near Teakettle Junction, I drove the final bone-jarring miles to the Racetrack, parking near a large camper at the trailhead for Ubehebe Peak, at the north end of the playa. Unsurprisingly, the “no camping” edict was not enforced. 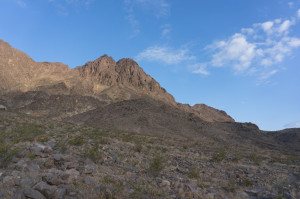 After going for a walk on the northern end of the lake, I headed up the trail for Ubehebe Peak, more to get a better view of the Racetrack than to bag the summit. I met the owner of the camper along the way, a retired park ranger who had served in parks as far north as Wrangell-St. Elias. We talked for awhile, then he descended to look for “racing” rocks, while I continued toward the peak. Though it is hard to judge scale in the desert, this is actually a 1900-foot climb, though there is a decent trail most of the way. 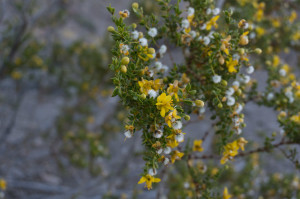 After sweating my way up through the black rock and flowering creosote, I lounged on the summit for awhile, watching the others wander around the huge playa looking for the famous rocks. 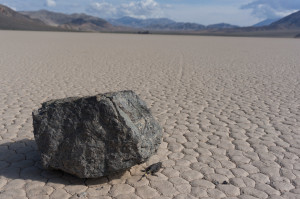 I jogged the descent, then drove to the southern end of the lake-bed, where the rocks are supposedly more likely to be found. Spying a likely-looking candidate from the road, I parked and walked a few hundred yards out to what proved to be a football-sized, rectangular black rock. This rock had apparently not moved recently, as its track had faded to near invisibility, but it was still neck-and-neck with a nearby lizard. Wandering around the area, I found a few smaller rocks with slightly more obvious tracks, but none trailing the deep, obvious gouges found in the brochure. Maybe I needed to look in a different area, or come back in early spring when the tracks were freshest. 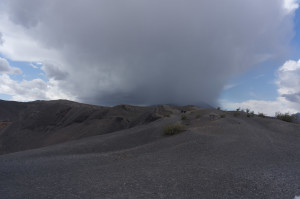 Having spent most of the morning sight-seeing, I took the wretched road back north to do some “work” and tag Tin Mountain, Dry’s neighbor across the valley. I pulled off the road at a likely starting-point, then watched the afternoon thunderstorms build as I had lunch and made my sandwiches. Though Dry was spared, things turned ugly above Tin, so I gave up on the summit and played tourist. 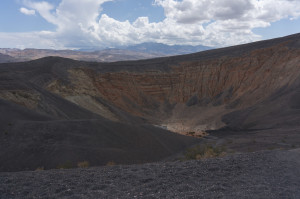 Next up was Ubehebe Crater, a volcanic blast crater north of Tin Mountain. Despite there being an obvious (and obviously-fun) path straight down to the bottom, I was the only person to run down and slog back out. Part of me wanted to do a couple more intervals, but that would have been ridiculous, so I emptied my shoes and continued my tour. 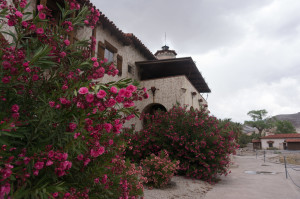 The final stop was Scotty’s Castle. Seeing it on maps on previous Death Valley crossings, I had assumed it was just a castle-shaped rock formation, but it is actually a castle-themed mansion, built in the 1920s by a crazy rich man befriended by a local con man named “Death Valley Scotty.” There are tours, and with them tourists, but I was content to just walk around the outside, admiring the flowers and the collection of water and diesel generators in use over the years. Evidently the water generator, like the carillon and tower clock, still works after almost a century. 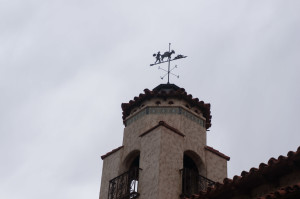 Retreating to my car under the threat of rain, I drove into Beatty (motto: “We make Tonopah seem cosmopolitan.”) to get my tire patched. With an extreme climate and a fair amount of truck traffic, the town supports a healthy tire-repair business, though this seemed to be the slow season. What I thought was a nail puncture was actually caused by my driving too fast over sharp rocks (surprise, surprise), so while the guy put in a patch, he advised me not to trust the tire. After grabbing a few apples (choice of “green” or “red”) at what passes for a store, I returned north, then very gingerly drove miles of dirt road toward camping near Grapevine Peak.

“Grandstand” and camper for scale

This entry was posted in California, Nevada, Tourism. Bookmark the permalink.

3 responses to “Ubehebe and the Racetrack”