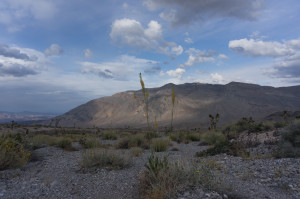 Waking up at Last Chance Spring, I glanced at my again-flat tire, then headed up the canyon on foot to tag Last Chance Peak (oddly not the range highpoint). I passed an old mine shaft and crude shelter, then continued up the branching washes, choosing whichever seemed largest at each split. I didn’t know anything about the “official” route, but figured it didn’t matter in such gentle and un-vegetated terrain. When the washes started to become frustrating, I headed up the spine of a ridge, climbing through sparse trees and sage to eventually reach the main north-south crest. 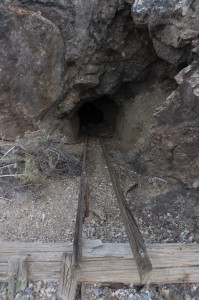 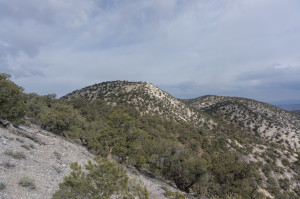 After putting on all my warm clothes, I hiked to the next highpoint south, from which I located the apparent highpoint a few bumps to the north. After crossing a few intermediate bumps, I found the ammo box with the register. I eyed the clouds a bit, then took the vaguely-cairned standard route back to the car. Inflating a 31″ truck tire with a bike pump takes some work, but I could use the exercise, and I figured it was faster to do this a few times than to change the tire. Plus, maybe the sealant would start working if I gave it more time. 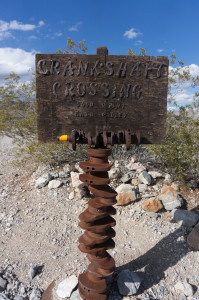 Returning to the main road at Crankshaft Junction, I continued south toward the main Death Valley, stopping at the pavement near Ubehebe Crater to top off my tire before driving 10 miles of the obnoxiously-washboarded Racetrack Road to a pullout where SummitPost suggested I start the hike to Dry Mountain. This is actually a bad place to start: the easiest route starts up the alluvial fan clearly visible 8-9 miles up the road. This fan leads to the base of Point 79xx’s south ridge. Climb the ridge, and Dry Mountain is finally visible after crossing through the saddle between two slightly higher peaks to the west. 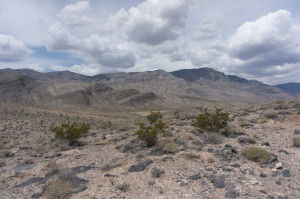 Anyways… With a suboptimal starting location, the online route description did not match the terrain. I headed up and generally southwest, crossing undulating terrain and looking for the best way up the main ridge west of the valley. With nothing but sparse sage and the occasional barrel cactus to get in the way, the route was mostly easy going. By the time I realized that Point 79xx was the nondescript thing to the north, I was looking at it from the other side of a 1000-foot valley. 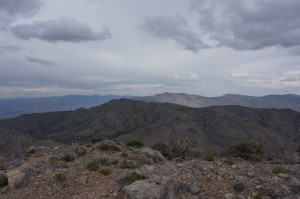 Not wanting to lose that much elevation, I instead followed my current route west to the main ridge, then made my way northwest to a wash that seemed the most efficient path toward what looked like the range highpoint. This involved losing a depressing amount of elevation, dropping from something like 7,800′ to about 7,000′ at Dry’s base, but there were no better alternatives, and I could cover the horizontal distance quickly in the dry wash. 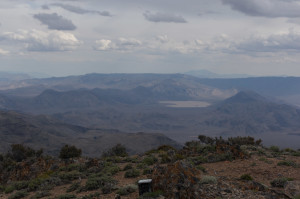 From the base of Dry’s southeast face, it was a mostly-straightforward 1,600′ climb, following a gully, then a ridge that joined the standard route near the summit. It was cold enough that I did not stay around long to enjoy views of the Eureka Valley to the west and Tin Mountain across the way to the east; however, the clear view of the Racetrack to the south tempted me, despite the tire situation, to drive the extra 15 miles to check it out. After all, when would I ever return to this corner of the backside of nowhere?

I followed the standard route back, dropping to 7,100′ before climbing over Point 79xx and descending its south ridge. This was easier than my outbound route, and would have been even more-so if I didn’t have to cut across some low hills on the straight line back to my car.

With an hour of daylight left, I decided to finally address the tire situation. The first tire change in a “new” car is always a bit of a pain, as I need to figure out where the various wrenches and rods are hidden (often under my gear or sleeping platform), and how to apply them. The thing to lower the tire was awkwardly buried under the (folded-down) rear seats, requiring me to prop up my sleeping platform with my ice axe to get at it. After taking off the bike rack, I was able to lower the spare and take care of the easy part — jacking up the car and swapping the tire. The 31″ “clown tire” didn’t quite fit in the space allotted for the normal-sized spare, but I shoved it in as best I could, put the bike rack back on, and was on my way around dark. After a few more miles of horrid washboard road, I reached a “no camping beyond this point” sign at Teakettle Junction, where I pulled over for the night.

I found it this way