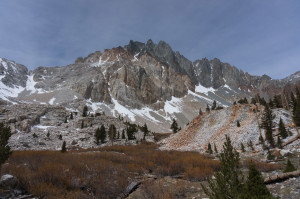 Split from below Red Lake

Looking at the forecast, I knew I should have done this a day earlier, but I felt unexpectedly beat-up when I woke up at Red Lake Trailhead, so I lazed around for a day before heading up the trail packing boots, tools, and camping gear for a quick mission. Though Split Mountain is a grim talus slog by its standard route, it has two interesting couloirs on its east face, which I hoped to climb and document. 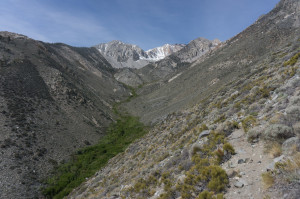 Both the road to the trailhead and the trail itself seem to have decayed somewhat over the past two years, but I had little trouble following either, and the willow maze was easier without leaves. Despite the previous week’s snowstorm, the trail was dry all the way to Red Lake, which was completely melted and already noticeably below its normal level. I set up camp at one of the luxurious spots, had a leisurely lunch, then wandered off to tag Tinemaha, a nearby SPS peak. 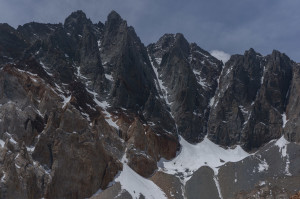 Lying at the end of a ridge extending east from the crest between Split and Prater, Tinemaha seemed likely to have a nice view of the valley and surrounding peaks. Heading north from Red Lake, I turned right into the next drainage east of the standard Split route, hiking through acres of fairly-stable talus and small patches of snow. I eventually climbed some steeper terrain to reach a saddle just west of the peak, then turned right to follow the ridge to the summit. 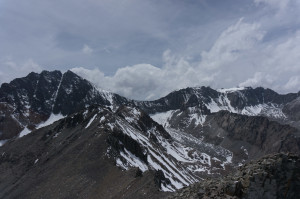 The view wasn’t quite what I had hoped — the higher Ed Lane and Birch Mountains blocked the palisades, but it was a nice place to sit for awhile before returning to camp. It also has an excellent view of Split’s St. Jean and East Couloirs, the two routes I had come to do. While the former looked filled-in, the latter featured a discouragingly bare rock band low down. Hmm… Returning to camp, I read until the sun dipped behind Split, had my hot glop pot, then crawled into my sleeping bag to read myself to sleep. 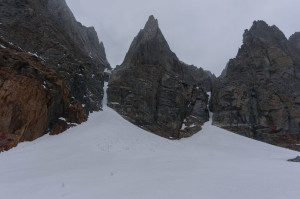 I woke to gray skies, but consumed my morning glop, suited up, and was on my way by 6:15. The forecast suggested that things wouldn’t get serious until the afternoon, so it was worth trying at least one climb. Reaching the base of both climbs a bit more than an hour later, I saw that the East Couloir was not to be: starting with a 20-foot frozen waterfall, it continued with some snow, a bare rock step, and some extremely thin ice. It had started snowing, but I figured I could at least do the shorter, easier St. Jean. 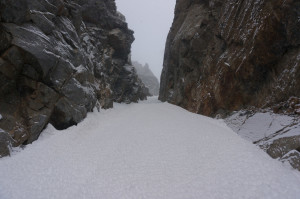 After a bit of névé and aerated snow getting into the couloir, I climbed an easy 20-foot ice bulge low down, then proceeded up endless, fairly consistent névé/snow for most of an hour. The climb was never particularly challenging, but still fairly fun, passing through scenic rock and sheltered from the storm. Looking around online, I gather that conditions can vary wildly between months and years, from skiable powder, to deep slush, to solid alpine ice, to awful scree-covered rock. Given the options, I suppose I lucked out. 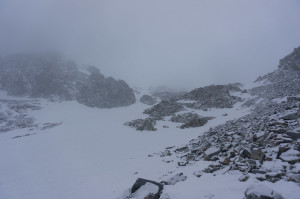 View up from descent

I stopped to put on my goggles shortly below the rim, then topped out into blowing snow on Split’s broad northwest talus plain. Without even contemplating the summit, I made my way down over talus and variable snow to the standard descent, which would have been very hard to find were I less familiar with the route. Returning to camp, I packed up as quickly as I could, and set off through the snow toward home. 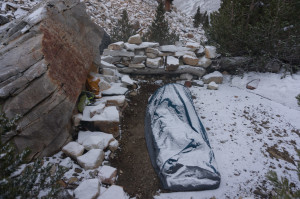 I noticed some fresh footprints in the willows, and startled an older backpacker just below. Unfamiliar with the trail, he had camped the night before at a nasty, lesser lake only a few hundred feet below Red Lake, then sensibly turned around when he saw the weather. While talking on the way down, I learned he had been forced to park his 2WD vehicle and walk all the way from McMurray Meadows, so I kept pace with him to drive him back and save him the walk. This small kindness paid off in barbecue — the only thing to eat in Big Pine besides C-store food — after which I holed up out of the rain to mope and plot my next move.

Split from below Red Lake

View up from descent