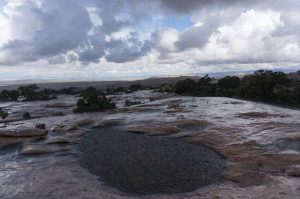 I had hoped to ride the White Rim Road, a 103-mile loop around the Island in the Sky district of Canyonlands, so I wanted to take an easy day after Phil’s World to prepare. I also didn’t want to drive much, so Abajo Peak, the highpoint of a small range west of Monticello, seemed like a good low-ambition goal for the day. 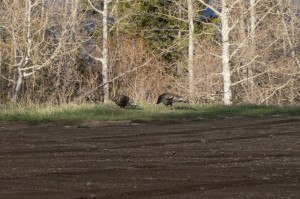 After sleeping at the base of the old ski area, I decided to take the dirt road up the south side instead, figuring that the remaining snow in the woods would be annoying. It had rained the night before, and the bottom part of the dirt road was wet and mucky. Not wanting to coat my bike with mud, I drove past the area of the localized rain shower, then started riding from around 8,000 feet. The road was consistently steep, but dry until it turned the shoulder of South Peak to cross a north-facing slope, where it was blocked by snow. 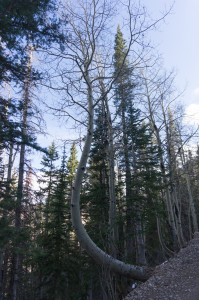 Locking my bike to a tree, I walked the rest of the road to an exceptionally large and ugly collection of buildings and radio towers on the summit. Not being in any hurry, I walked most of the way back to my bike, then coasted to the car. 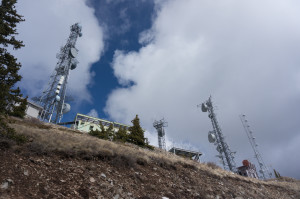 After getting some new and hopefully less mobile cleats, I hung out in Moab for awhile, then drove up to the start of the White Rim Road to camp. Waking to steady rain, I abandoned my riding plans and headed back into town, where I killed a day in the public library with the other dirtbags, then drove back to my previous camp. A large group of cyclists was finishing a multi-day tour of the White Rim as I arrived, looking generally miserable as they straggled in on mud-caked machines. As they described repeatedly dismounting to knock the mud out of their dérailleurs, I decided I would give things a bit more time to dry out. 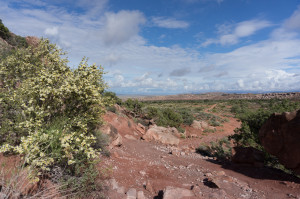 After driving back to the highway, I pulled in near the Klondike Bluffs trailhead on BLM land to camp, and was surprised to find maps of what was apparently a relatively new mountain biking area. Maybe I would have a chance to ride it the next day while the White Rim dried. 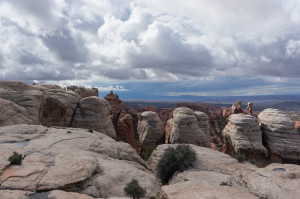 Unfortunately, I woke to find it had rained more overnight, so after driving through some nasty muck to the trailhead, I instead decided to jog 4-5 miles of jeep road to the Klondike Bluffs. A couple of riders pulled up as I prepared, including one professional woman with a striking quantity of wavy red hair. Though they were apparently willing to ride the wet, sandy trails, I preferred to wait for things to dry out a bit. I explored the Bluffs a bit, got poured on for about 5 minutes, then jogged back to the trailhead, passing a convoy of about 10 jeeps on the way. 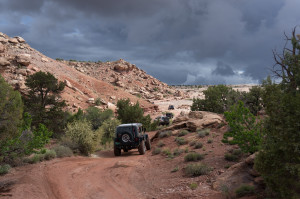 More riders arrived as I ate and eyed the weather. Though it never truly started raining, it sprinkled off and on, and it looked either overcast or raining back toward Island in the Sky. Clearly I was not meant to ride the White Rim this spring. With miles to drive and a one-day weather window in Nevada the next day, I looked through my list of things to do, then headed west for Ely, Nevada.

View from near Abajo

This entry was posted in Biking, Utah. Bookmark the permalink.