Fear and sucking in Durango

On the one hand, she can be frustrating and high-maintenance, and occasionally breaks down unpredictably. On the other hand, she is fun to spend time with, and introduces me to new areas and activities, so I’ll probably keep her around for awhile. Plus, she’s a good ride… 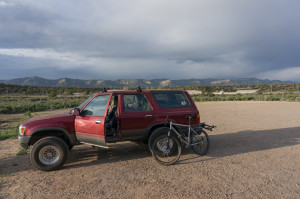 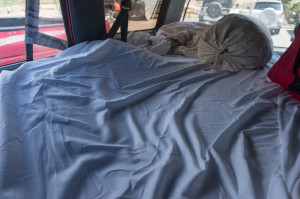 Based on Mike’s recommendations, I stopped at the Durango Walmart to improve my sleeping situation, then drove over to the Horse Creek trailhead to explore the nearby network of supposedly easy trails. Early on a Saturday afternoon, the large parking lot with the sign was mostly full. Heading up the old road, I mistakenly bypassed the trails, eventually ending up on a well-graded country road on the other side of a minor pass. 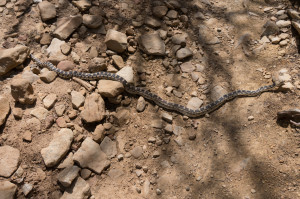 After realizing my mistake, I returned to the first obvious trail on the north side of the road. Less than 100 yards up the first climb, I slammed on my brakes to avoid running over a lethargic snake, then fell over when I couldn’t unclip fast enough. 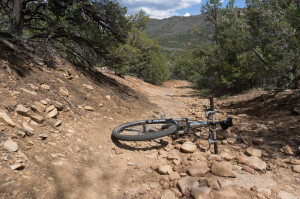 Reaching the ridge, I turned uphill, riding up miserable little sandstone steps. Occasionally, one of them would be big enough to stop me, and I would either manage to unclip in time, or topple over on my side. After doing this a few times, I realized that my cleats were slipping, frustrating my attempts to unclip. I tightened them as much as I could, then turned around, getting off the wretched ridge at the first opportunity. 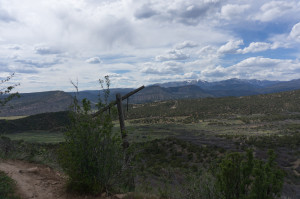 Once back on the road, I headed toward the trailhead a bit, then turned south into the Meadow Loop area, where no-skills people like me are supposed to ride. Life improved considerably, modulo occasional stops to reposition and tighten a cleat — I still haven’t figured out how to make them stay put without stripping the bolts. After much climbing, the descent on a counter-clockwise tour of the outer Meadow Loop was fast and fun.

With plenty of daylight and energy left, I decided to explore the Telegraph trail, which climbs a hill south of the meadow past some old telegraph poles. This I also found manageable, though the signage at the spread-out 4-way intersections was confusing at times. I had intended to ride something longer, but ended up returning via Sidewinder, a fast, swooping, banked descent toward a different trailhead. This was probably the highlight of the day, as I was able to get out of my normal terrified-self-preservation mode for most of the descent. I took the paved Animas trail back to the car, ate some stuff from cans, and drove on toward Cortez. 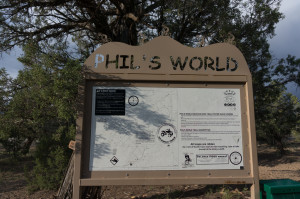 After camping a bit farther up the road, I returned to the well-signed and -developed Phil’s World parking lot, empty at this early hour. The night had been relatively warm, but the sky was overcast, and rain threatened to the east. 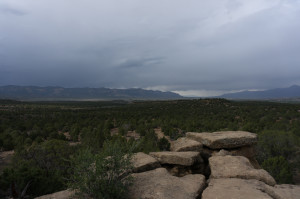 While Mesa Verde and Ute Peak rise fairly impressively to the south, Phil’s World lies in gently-rolling terrain covered in juniper and sage, the kind of land I would normally think is best suited for dumping old mattresses. The trails have two parts: the smaller “Trust Loop,” and the main collection of loops across the road from the parking lot. All of the trails are one-way: not only are they signed for clockwise riding, but they have been expertly built so that drops and other obstacles are encountered on the downhills. Also, simply turning left at all but one well-signed intersection results in riding all the trails.

Having nothing else to do all day, I started by riding the outer perimeter of the main area. This was mostly fast and fun, with the smooth, banked trail meandering among the junipers as it goes around and over small hills and sandstone outcrops. The main exception is the Ledges Loop, which spends more time on unpleasantly rough sandstone. I ate it once on this section, possibly bending my rear derailleur, but found most of even this part ridable. 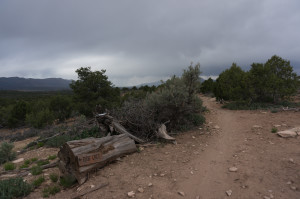 The highlight of Phil’s World is Rib Cage, a smooth trail that swoops and dips along an arroyo, with perfectly-banked turns and a variety of dips and jumps. After trying it once, I returned to the car for more water and canned food, eyed the weather for a bit, then checked out the Trust Loop. That proved mostly easy and underwhelming, though increasingly hot as the sun finally came out. Returning to the now-crowded parking lot, I refilled my water, then did three more increasingly-fast laps on Rib Cage — it’s that good.

This entry was posted in Biking, Colorado. Bookmark the permalink.