With the end of my lease and the start of May comes another season on the road. I’m compacting my belongings, repairing my gear, and getting an oil change and tune-up for my house. Though much of the mid-season is still in the air, this winter’s Pacific drought has led me to start in the high Sierra, which I skipped entirely last year. Most of the climbing will be “work,” climbing old peaks by new routes, though I will add a few new things, especially toward the end of June.

After that, I have some unfinished business in Washington, including the remaining volcanoes, the Olympic Range, and Mount Logan, my last Cascades 9,000-er. Then it’s off to Canada for some time in the Coast Range, Selkirks and Rockies; hopefully Edith Cavell will play less hard-to-get this year.

So… more of the same, but different. Welcome aboard! 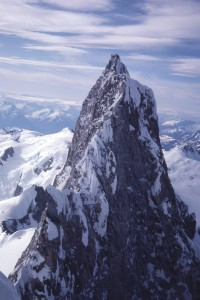 P.S. — Moving the blog to have sane URLs, something I should have done long ago, broke a bunch of old links and photos. I’ll be fixing those as I have the time.
This entry was posted in Meta. Bookmark the permalink.