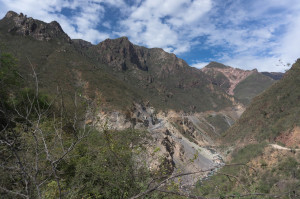 Or, “Gueros getting serious about fitness tourism.”

With some time to kill between sunrise and when auto shop opened, we naturally decided to do a few intervals. A bit of panning around on Google Maps showed some roads unlikely to have too many cars or dogs, we suited up and went our separate ways. Not having planned to run on this trip, I had brought neither real shorts nor headphones, so I had to make do with zipping off the legs of my hiking pants and taking in the “scenery” as I ran northeast out of town past a gravel yard and who-knows-what else.

Afterward, we took the van over to the mechanic, who ran a somewhat bigger and better-equipped shop than the last one. Sensing people who would pay promptly, he got right on it, attaching a pressure gage to the engine block, pulling on some wire to rev the throttle a few times, letting the van run for a bit, then plugging some hand-held device into the diagnostic port. His diagnosis: “fuel pump; should be fixed in a couple of hours.” After killing more time at the hotel, we returned about two hours later to find the van already fixed and parked on a side street. Total cost: $100, or only slightly more than places in the US sometimes try to charge simply to read the diagnostic port.

Headed north again, we returned to the southern outskirts of Chihuahua, then headed west to Cuauhtemoc, passing the time listening to Bach, PDQ and otherwise. Just as we were extracting ourselves from the center of town, the van momentarily lost power — not the total death we had experienced before, but a sort of “hiccup” like a bubble in the fuel line or something. Since Cuauhtemoc is basically the “end of civilization,” we returned to downtown to consider our options. There were almost certainly buses from Cuauhtemoc to Creel, our gateway to Copper Canyon, but we didn’t know their schedule, where the bus depot was in town, or where we could find some internet. After some indecision on my part, we passive-aggressively psyched each other up to take the “stupid” option and power on to Creel in the van. What’s the worst that could happen? We rolled on, through acres of apple orchards filled with wood-fired barrels to protect the blossoms against frost.

Turning off the divided highway at La Junta, we passed a caravan of tanker trucks being inspected by the state police, toting a truly Mexican number of large and fierce-looking guns. The van gave an occasional kick from time to time, but mostly behaved itself as we headed southwest and climbed into the Sierra Madre. After days spent in various un-scenic varieties of desert, it was a pleasant change to begin passing through terrain resembling the Gila of southwest New Mexico, with broad grassy plains, pine trees, and even a shapely volcanic plug. 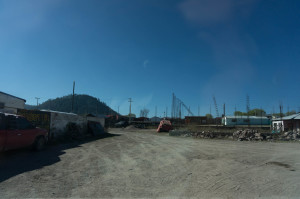 We passed through rolling forest, over an 8,000-foot pass, and down into smoking, ruined hellscape of San Juanito. It was quittin’ time, and dead-eyed men sat along the streets next to the bodegas and crumbled buildings, drinking beer or just watching the passing traffic. It was cool at night at this elevation, and smoke from people’s wood stoves created a gloomy haze over the town. 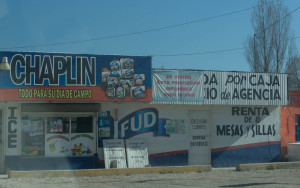 A pickup truck full of bored-looking local cops pulled in front of us, then fortunately turned off on a side street. 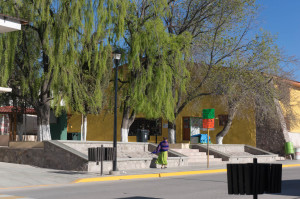 Reaching the outskirts of Creel, the GPS misdirected us off on some side street, taking us through the seedier side of the city, and we briefly worried that we might be looking for lodging in San Juanito’s sister city. Fortunately, tourism supports a clean, well-lit, and safe-feeling area near Creel’s city center. We had hoped to stay in the incredibly cheap and well-appointed hostel, but it was full of Mexican tourists for Holy Week, so we were forced into a “costly” ($25/night) hotel behind a canned goods store. This was a luxury establishment, with four layers of wool blankets on each bed, and a “calefactor” for our calefaccion. 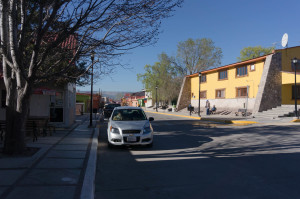 After dropping some stuff in the room, we went touring the downtown in search of things to cook on my camp-stove (and also next to the “calefactor”). Though the town was clearly swarming with tourists, we seemed to be the only gueros, which made us feel a bit out-of-place. 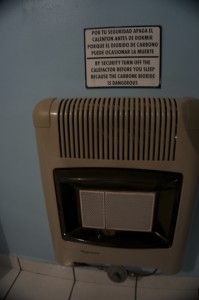 For all your calefaction needs

The local Mexican and Tarahumara vendors didn’t seem to make a distinction, with one offering apples, beef jerky, and peyote. On our way back to the store, we passed a Mexican army truck rolling slowly down the street with the rest of the traffic. It was everything you would expect: four men sitting in the bed with assault rifles, and one manning a roof-mounted machine gun, all wearing helmets, bullet-proof vests, and camo balaclavas. I’m not sure if it should have been reassuring or not; none of the other tourists paid them much attention.

Creel seems to be trying to promote itself as a place for mountain biking, so the next day I headed down the street to start the next part of the “fitness tourism” agenda by renting a bike (Mike had brought his own, of course). The rental place had plenty of more-or-less maintained and usable bikes for a reasonable price, but convincing the guy to rent me one took some doing. He needed his entire cycle-herd for a large family the next day, and needed mine back in good condition by 6:00 that evening. I foolishly told him we wanted to transport it in a private vehicle — ¡tu romperlo! — then ride to Batopilas — ¡no es possible! — and barely made it out the door after giving him my passport and swearing to have it back in good shape. 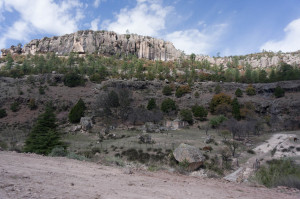 From Creel to the gorge containing Batopilas, the two-lane road winds in and out of canyon after canyon, many over 1,000 feet deep, past white cliffs and hoodoos poking out of the pine forest. Though as deep as the Grand Canyon, the Copper Canyon area is not a single, awesome hole in the ground, but a maze of plateaus with deeply-cut canyons running between them. The road, well-paved and almost entirely free of traffic even while Creel was full of tourists, would make an excellent road bike tour. 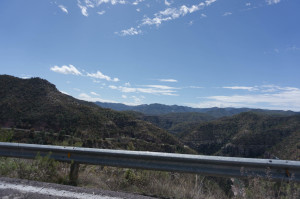 Looking at the surrounding country, we saw how the Creel area had acquired its supposedly-excellent network of singletrack bike trails: generations of Tarahumara, walking from house to house, had worn foot-paths along the valleys and across the mesas. We saw a number of them as we drove, the men wearing the universal uniform of blue jeans and button-down shirts, the women mostly in the traditional full, colorful skirts and blouses. Most had large shawls over their shoulders, which they used to carry both possessions and children. Some were walking comfortably along the trails, but most were simply sitting by the side of the road, miles from the nearest town or house. They didn’t seem to be trying to sell anything or hitch-hike; I have no idea what they were trying to accomplish.

Our plan was to drive to where things “get interesting”, either at the edge of the big canyon or where the road deteriorated to dirt, then bike the rest of the way to Batopilas and back. I had expected the pavement to end at a certain intersection, but it continued for miles beyond. Near the edge of the main canyon it started to become potholed enough to be annoying to drive, so we parked at a dirt pull-out around 6,900 feet and started riding. 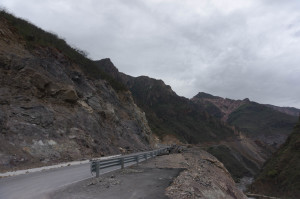 After a bit of gently rolling, thoroughly-potholed tarmac along the rim, the still-paved road plummets in just five miles to the river at 3,100 feet. Though relatively new, the road is poorly-designed, and was frequently reduced to one lane by piles of fallen rock. My El Cheapo rental bike’s brakes weren’t all they should be, so I had to be a bit cautious; Mike gamely took it easy. At the river, we found a somewhat lackadaisical construction crew and some large Caterpillar equipment apparently working on a new bridge. The old one, a sketch-ball looking wooden thing, looked more suitable for the old one-lane dirt road than the new paved one.

From the bridge to Batopilas, the river drops 1,100 feet in only 16 miles. So does the road, but via an endless series of rollers rather than a smooth descent. We passed a few natives hanging out or walking along the road, and, across the river and on the hillside above, we saw the occasional foot trail leading to an isolated home, but the canyon was surprisingly quiet. The pavement degraded to chip-seal, then finally ended a couple of miles short of town. 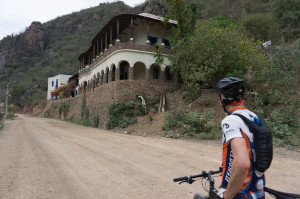 After passing an amazing and well-maintained building that might have been a hotel or a monastery, we crossed a final bridge to reach the outskirts of Batopilas. 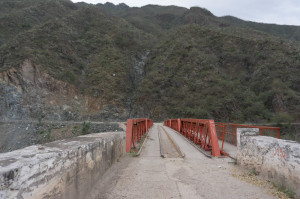 Mindful of the need to return my bike by 6:00, I had been riding fairly hard down the canyon, and only paused briefly for a couple photos to prove we were there before turning around for the grim slog home. 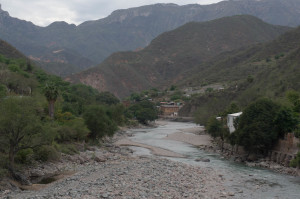 This was fitness tourism, and it was time for type II fun, not sight-seeing. The day had been blessedly overcast, but it was still hot some 5,000 feet below the rim, and that began to get to me on the rolling climb back along the river. I had no power on some of the steeper rollers, and shamefully even stopped on a couple to cool off before crawling back into the pain cave. We passed more Tarahumara on the side of the road, and a road crew of four slowly clearing away one of the many rockfall piles with shovels. At the rate they were going, they could remain fully employed indefinitely, clearing the last 20+ miles of road to Batopilas at the rate of a couple dozen feet per day. 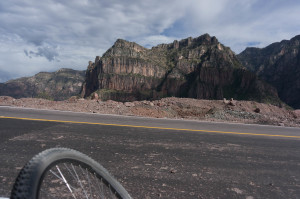 I hoped that the weakness would pass if I drank more water and kept up a moderate pace, but a 6:00 return looked impossible. I finally convinced an increasingly-bored Mike to take off at his own pace, fetch the car, and meet me on the climb out. That turned out to be every bit as bad as I had expected, a slow, grim accumulation of vertical feet in units of 250, with rest stops between each of these weakness-induced “intervals.” With unlimited time I could have made it back to the car by dark, but would almost certainly have had to play “giardia roulette” with one of the roadside streams, as I ran out of water some 2,000 feet below the rim (and had not been saving my own urine). 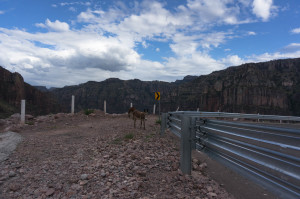 On the good side, this unpleasant process gave me an excuse to take a few pictures. 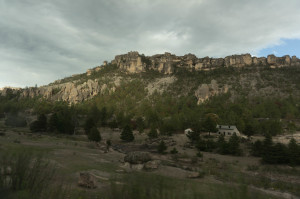 I timed things just right, mounting up for another 250-foot push just seconds before Mike drove around a bend. I tossed the bike in the back and collapsed in the passenger’s seat, and Mike began rallying the van — to the extent that’s possible — back to Creel. I took some decent evening photos of the scenery through the window, but stopping was not an option. At 5:55, we pulled up 50 yards short of the rental place, and I “triumphantly” pedaled across the street to give the surprised rental guy his precious bike. Then it was time to shower and visit the grocery store for chorizo, eggs, and vegetables to make an extra-large pot of nutrient glop.

Cliffs along one rim

This entry was posted in Mexico, Tourism, Type II fun. Bookmark the permalink.