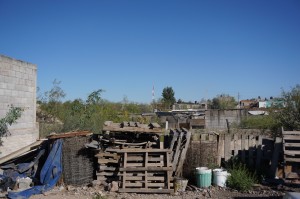 [Apologies for the (more than usually) long and rambling narrative and lack of pictures. — ed.]

It all started when Mike came into some unanticipated free time. Neither of us had been above 14,500 feet on foot, and I have long been curious how my body would react to higher elevations, so when Mike proposed a trip to the Mexican volcanoes, I eagerly agreed. These are normally done in the dry season around Christmas, but Spring Break looked reasonably dry, so we decided to give it a shot.

At first, we figured out the costs and logistics of flying to Mexico City or Puebla and climbing 2-3 volcanoes in a week (car rental, checked bags, etc.); they were reasonable, but not great. However, living only a few hours from Mexico, we realized that driving would be cheap, not too slow, and “stupid” in the “awesome” sense. Looking at the three cars we had available — ancient 4Runner, old Outback, middle-aged Windstar — we chose the Windstar for its comfort and room, and set off for Mexico in style: crampons, ice axes, sleds, bike, peanut butter pretzels, tuna, apples, onions, and 17 gallons of water.

After a night in Las Cruces, we headed for the small Santa Teresa border crossing, bypassing the chaos of El Paso. The crossing was uncrowded, but we soon found that Mexican officials speak almost no English, and that travel in Mexico is much harder than travel in Canada. As long as you have enough money to get in and out of Canada, you can apparently do whatever you want. But if you want to go to Mexico, you need to specify exactly how long you’ll be there, buy special insurance for your car, and leave a $300 deposit to make sure you bring it back north. 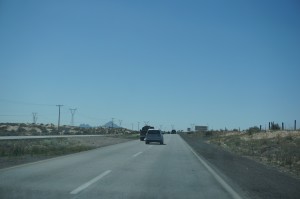 By the time that was all settled, the border parking lot was starting to fill with cars, mostly Mexicans headed south, many carrying piles of assorted goods in back, from barbecue grills to bikes. After passing through the checkpoint without even a cursory vehicle inspection we were on our way, traveling southeast on the first of many Mexican toll roads to join the main highway between Juarez and Chihuahua. 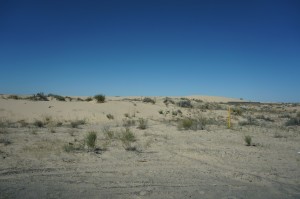 The road was basically like an American 4-lane divided highway, except for periodic toll plazas ($4-15 apiece) and a lack of overpasses — most intersections were simply crossovers in the median. Other than some sand dunes near Salamayuca and some gas stations and vendors in Villa Ahumada, the scenery was mostly empty high desert, with barren, isolated peaks rising from the creosote and yucca plain. 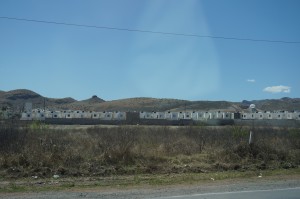 Passing through Chihuahua, the GPS decided to have one of its periodic freak-outs, sending us off the main highway for mysterious reasons. Looping around an overpass near the University, the engine suddenly died. Fortunately we were moving reasonably quickly near the top of a small hill, so Mike, thinking quickly, was able to coast the van back down the way we had come and directly into the parking lot of a Sam’s Club. Though we could hardly have chosen a better place to break down, it was mid-afternoon on the Saturday before Holy Week in a very catholic country, so it seemed likely we would spend a day or more “visiting” Chihuahua before we could continue.

Mike had fortunately bought deluxe Mexican insurance, which gave us a number with a more-or-less English-speaking person to call, and would pay for the tow. After some wandering around, we figured out that it was a toll-free number, and found a payphone across the street. 45 minutes or so after making the call, a dilapidated tow truck pulled into the lot, and Mike and I began the first of several attempts to explain an apparent fuel pump failure with hand gestures and small words. It was getting on toward evening, so I wasn’t too optimistic, but the tow truck driver thought for a bit, made a call, and told us to hop on board. Perversely, the van decided to start right up and drive onto the tow truck without complaint. 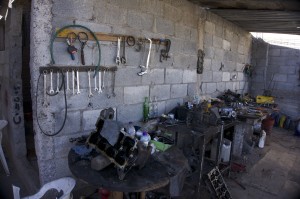 Leaving the very American-looking area around the Sam’s Club, we drove east into the barrio. The driver pulled to the side of the lane-and-a-half street and, after some more negotiation, unloaded the van into a “garage” situated on the first floor of what was intended to be a multi-story apartment, with rebar sticking up out of the concrete walls, and an old tarp serving as a partial roof. 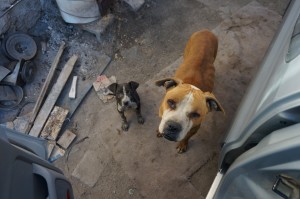 To my pleased surprise, the mechanics at this inauspicious establishment both spoke English: Jose had voluntarily moved back to Chihuahua after spending 20 years in Washington State, and Reyes had just been deported 3 months ago, leaving a wife and three children behind. Jose seemed content with his lot, but Reyes obviously missed his family, both those still in Washington and those in Michoacan, one of the more drug-gang-infested parts of Mexico. Sensing customers who would pay promptly, they immediately went to work in ghetto fashion, blocking the front wheels with a couple pieces of scrap wood, lifting the rear end off the ground with a hand jack, and crawling under the precariously-lifted car to lower the enormous fuel tank on another jack to get at the fuel pump. Jose had it out in 15 minutes, and things were looking good. Not to mention cheap: 800 pesos for the part and 400 ($27) for labor, or the equivalent of 3 prostitutes for the whole job. 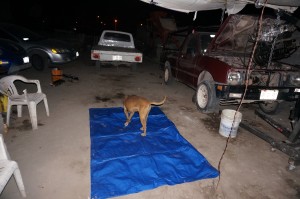 Rather than taking a replacement off a shelf or going over to AutoZone, Jose made a couple of calls, and a young man came by on a motorcycle to pick up the old pump and track down a replacement. He came back quickly, but with something that did not even vaguely resemble the old pump, then left again, promising to return. It was getting on toward evening, so we made a run with Reyes to the local bodega for the mechanics’ evening beer, then returned to sit around and talk about travel, women, and whatever else we could think of. Having a slightly-buzzed mechanic working on the car probably wouldn’t have been especially effective or safe, but it seemed increasingly unlikely the part would come that night, so we were content to relax and watch the neighborhood. 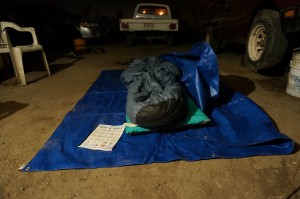 The next-door neighbor, who lived in a slightly-more-complete part of the same unfinished building, came by with some scrap-wood to heat water for his morning shower, and Jose helpfully pointed out that he would have to get by with cold water, since a bit of gas that sloshed out while lowering the fuel tank would probably set the place on fire. A middle-aged woman came by with a shy young boy in tow; I offered him an apple from my supply, which he took after some hesitation. 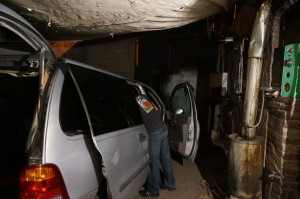 Later, a young deportee who spoke near-flawless English came by on a bike. He had lived near Denver from a very early age, quitting school in fifth grade to work on a nearby farm. Though he was friendly, I am sort of glad I did not meet him under other circumstances. His tales of hot-wiring cars and joy-riding them around for fun seemed playful, but you got the sense he was something of a tougher customer than the other two.

After going up the block for some tamales, it was time to think about where to sleep. The best option seemed to be the garage, which had both a locking door and a starving pit-bull named Max, so Mike crawled into the back of the still-slightly-jacked van, while I threw out my tarp and bag on the oil-soaked ground nearby. I was a bit concerned that Max might want to cuddle — he was clearly attention-starved — but after checking out my sleeping arrangements, he went over to curl up in his usual place in the “office.”

The party next door quieted down by midnight, and I was able to get a surprisingly good night’s sleep. With some time to kill in the morning before the mechanics returned, Mike and I cooked some corned-beef hash for breakfast, then explored the “shop.” Jose was in the middle of completely rebuilding an engine block for a woman who had driven her car without oil — a two-week job, he said — and a nearby truck looked next in line to receive the same treatment. Once the part arrived, they had the car put back together in 20 minutes, and we were once again on the road south, less than 24 hours behind schedule. This thing still seemed possible.