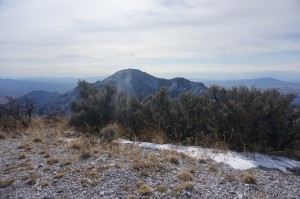 Carr and Miller are two peaks in the Huachuca Range in southeast Arizona, just a few miles from the Mexican border. The range is much like its unremarkable desert neighbors to the east and west, but Miller’s 5,006 feet of prominence put it on my radar. Carr is only a slight detour along the way, with somewhat better views. 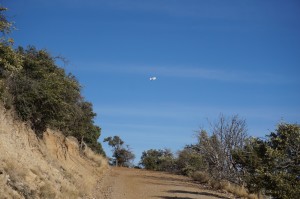 I was familiar with the police state south of I-10 from my last trip to Arizona, but in addition to the expected Border Patrol checkpoints and cruising SUVs, the Sierra Vista area features a big, white, creepy surveillance blimp. After running errands under its watchful eye, I spent some quality time in the public library, then my way up Carr Canyon, no doubt suitably surveiled, finding a place to camp near the winter closure gate. There was a bit of late-night traffic on the dead-end road, but no one asked for my papers or tried to swipe my bike. 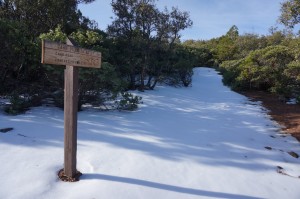 The bike proved useful once again, as I was able to ride the 5 miles and 1,900 vertical feet of well-graded dirt from the gate to the Carr Peak trailhead. There was a bit of mud and snow higher up, but someone with a key had driven the road and packed it down. From the trailhead, I followed signs toward Carr Peak; while there were initially only bear tracks on the trail, I soon found a few sets of boot-prints. I kept an eye on the dirigible as I hiked, watching it descend surprisingly quickly to its landing pad. 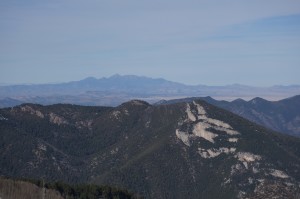 Circling around to Carr’s southwest side, I took a short detour to the summit for a look at Sierra Vista and the craggier canyons to the north, then returned to the trail, circling around the head of Miller Canyon to join the southern end of the Arizona Trail. Some people have reported lots of trash on this section left by migrants, but I only saw a couple of Mexican candy wrappers, including the un-American “Pulparindo: dulce de tamarindo, salado y enchilado”, which actually sounds like it might be good. 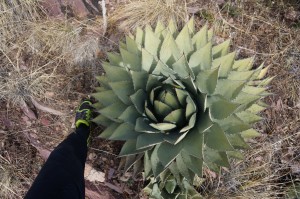 I did, however, find some of the largest death-yucca (Agave parryi?) I have seen anywhere. 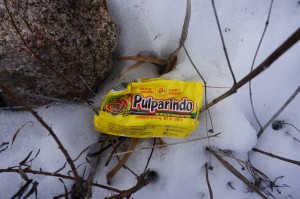 As I neared the southern end of the range, I reached the spur trail to Miller’s summit. Most of the tracks seemed to branch off, suggesting that the traffic since the last snow was from peak-baggers. As on Wrightson, there apparently used to be a fire lookout on Miller, but I found neither plaque nor summit register here. 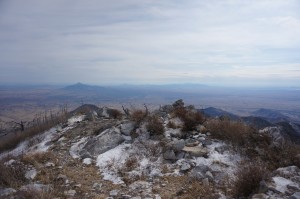 South, the range drops off sharply to the non-obvious Montezuma Pass, then on to the Mexican border and a desert plain broken by sporadic low, isolated peaks.

The jog back to the trailhead was nowhere near as fun as on Wrightson, but still went quickly. Returning to my bike, I found the road was wetter and muddier than in the morning, but only enough to spatter me with mud, not to slow me down. After a fun ride past a handful of people inexplicably hiking the road, I stripped off my muddy clothes, then headed into Sierra Vista to check the forecast. Finding it not at all conducive to poaching Mount Graham the next day, I reluctantly began the long drive home.

One response to “Carr, Miller”