Picacho (and FAIL on Lemmon) 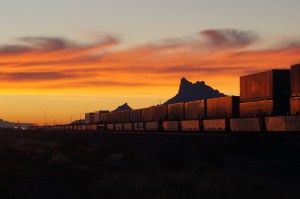 Every state that James K. Polk took from Mexico has its own Picacho, Arizona’s being a small volcanic protrusion along the interstate northwest of Tucson. Originally a class 3-4 climb with tricky route-finding, it has been turned into a jungle gym for grown-ups via cables, fences, and plentiful signs. It’s not on any list, and not particularly high, but after a thorough ass-handing-to on Lemmon the day before, I was looking for something easy and below the snow line. 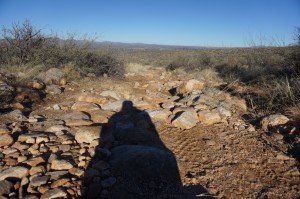 How did Lemmon, a drive-up, get the best of me? Rather than driving or riding the paved road, I decided to “play fair” with the mountain by taking the Sutherland trail from the desert at 3,000 feet, yielding a climb of a bit over 6,000 feet. Since the first part is labeled as a 4WD road, and most of the route lies outside the wilderness boundary, I hoped to bike the first 1,500 feet and almost half the distance. I put my bike headlamp in my pack, then waited for the sun to reach the parking lot on the west side of the mountain before starting off. I ignored the angry signs about trespassing on “state trust land,” riding along a well-graded dirt to the rougher Forest Service road. (The signs are apparently unenforced, as a cop right by the 10-15 cars parked right next to the boundary when I returned.) 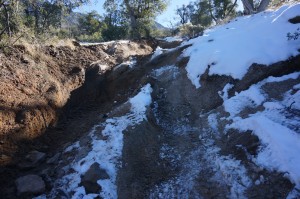 Unfortunately, the old road turned out to be one of the worst roads I have ever seen, comparable to Colorado’s famous Lake Como road, with a surface made mostly of fist- to toaster-sized boulders, frequent built-up rubble ramps, and even a waist-high step. Though one intrepid driver in an especially burly Jeep had apparently reached the end of the road, I mostly took my bike for a walk, then locked it to a powerline pole and continued on foot. 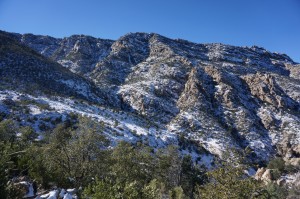 A boot-pack took me partway up the snowy north-facing slope to Sutherland Ridge, but gave out before the top, leaving me with what turned out to be miles of 4-6″ deep snow on a faint path through boulders and spiny plants. Reaching the junction with the Cañada del Oro trail around 1:00, I decided I would rather not slog the remaining distance to the summit and spend several hours of headlamp time. 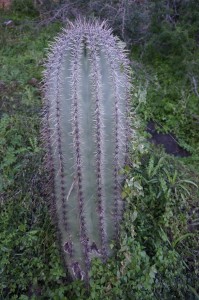 Hence Picacho… After camping in the desert a bearable distance from the interstate and parallel train track, I returned to Picacho State Park, put a few dollars in an envelope, and set off to tag the peak around sunrise. The recent rains had briefly turned the desert green, but if any snow had fallen, none remained. I managed to avoid touching the cables, and found a bit of class 3-4 climbing along what would have been a non-obvious route. After a few minutes by myself on the summit, I returned to the car and headed back toward Tucson, looking for something to do with the rest of the day.

I had enough here

2 responses to “Picacho (and FAIL on Lemmon)”