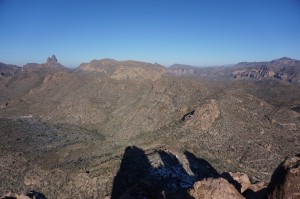 Frustrated with the cold, dry weather at “home,” I threw some food, clothes, and a bike in the car and headed back to southern Arizona, where everything sticks, stings, or stinks, with two goals: to revisit the Superstition Mountains, and to tick off some ultra-prominence peaks. Ironically, I finally found snow on the drive south, which took an hour longer than expected thanks to nervous Arizona drivers on the snow-packed roads between Springerville and Globe. I finally pulled into one of the camping spots on the way to the Peralta trailhead, set my bike outside, and turned in for the night. 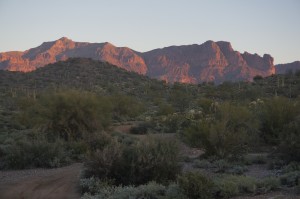 My first goal was to tag Miner’s Needle and Superstition Peak. Unlike Weaver’s Needle, which is barely visible from Highway 60 if you know where to look, Miner’s stands out impressively on the southern edge of the range. It had caught my attention on the drive home from Weaver’s, but I found little online about its difficulty. Superstition, while not much of a climb, is the range highpoint and an interesting-looking peak. Linking them up makes little sense, but would give me a chance to hike/run some new trails. 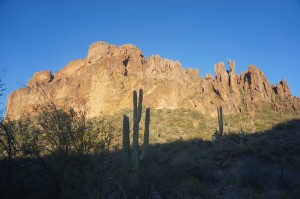 This being a weekend at a popular trailhead, I saw a number of cars drive by before dawn, and several more between dawn and when I summoned enough motivation to crawl out of my sleeping bag in the cold. It was cold enough that I took the time to heat my morning “Cup of Sadness,” and nearly froze my hands dealing with the stove and stowing gear. By the time I hit the trail at 8:00, there were 20 or more cars in the lot, and several groups milling toward the Peralta Trail and Fremont Saddle. 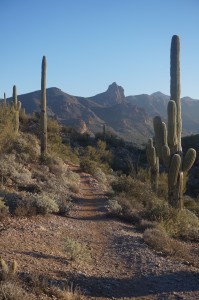 I, on the other hand, headed east on the Lost Dutchman trail, which parallels the south edge of the range, passing through a saguaro forest before heading north up the drainage east of the needle. While Miner’s looks like a single, tall rock formation from the east or west, it is actually three separate spires, with a gradual slope leading to within 50-100 feet of their summits from the north. Leaving the trail at the logical place, I found occasional cairns and bits of trail peeking out from the snow, leading to the saddle east of Miner’s. 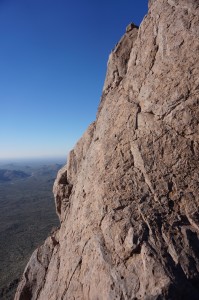 I saw two possible routes to the summit: The first climbs a 30-foot exfoliating slab to a chockstone on the (shady) east side. The second makes a few wildly exposed, face-y moves around to the gully that splits the south side. While the slab offered a painful-not-fatal fall option, the step-around looked like something I could climb in rock shoes. I switched shoes, put my camera on my belt, then spent a few minutes psyching myself up before making the delicate moves around south. The rock (bonded tuff?) is more solid and sticky than it looks, but the handholds are small enough to make it intimidating going up, and slightly more so going down. If I had to guess, I would say it is about 5.6. 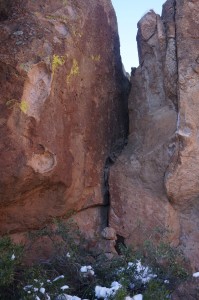 Above the step-around, a bit of 3rd class scrambling leads to the spiny-thing “garden” between the three summit blobs. A final, awkward grovel, made easier by someone’s rock step-stool, leads to the summit. 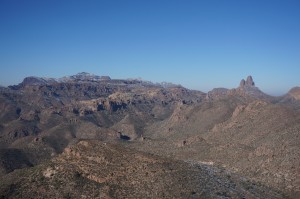 After not finding a register, I stayed only briefly before retracing my steps. I found a rappel sling at the top of the slab, but that was useless to me, so I retraced my steps, once again taking a minute or two to psych myself up for the step-around.

The technical part of my day complete, I now faced a long hike west, around Weaver’s Needle to the range highpoint. This was deliberate: while I could have done the two peaks as separate outings, I wanted to see more of the Superstitions’ interior. Continuing on the Lost Dutchman trail, I jogged past some campers on the way to a surprisingly lively stream, where it meets the Bluff Spring trail. Heading upstream, I passed more campers before turning right at the next junction, toward Bluff Saddle. The Superstitions are probably a miserable place to backpack for most of the year, but it seems people were taking advantage of the recent snow’s water and cooler temperatures. 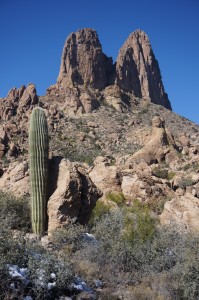 The trail deteriorated after Bluff Saddle, eventually disappearing in a flat, brushy area near Weaver’s. Heading cross-country up the wash south of the Needle, I soon found cairns and bits of trail along the obvious route connecting Needle and East Boulder Canyons. I following the main trail back to Fremont Saddle, where the usual crowd had gathered to admire the Needle from a safe distance.

Leaving the trail once more, I followed a fading line of cairns through the snow to the west. After suffering through snow and spines on the faint-to-invisible route, I found a sign and well-trod path at the saddle above Carney Springs, where I joined the standard route to Superstition. 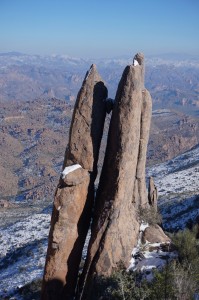 On the way to the summit, I met a man finishing a long traverse from the Flatiron, and another group of three coming back from the peak. Though the summit is a cluster of rock spires, reaching it requires only a couple easy third class moves. After a few minutes looking over the perfect grid of Phoenix streets, I jogged back down to Carney Springs, then took a trail along the wilderness boundary back to the still-crowded Peralta Trailhead. 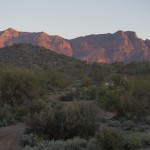 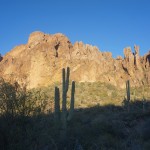 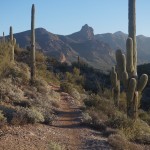 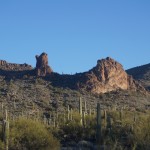 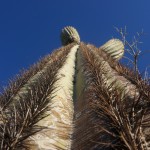 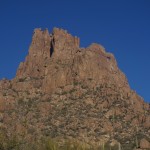 Miner’s, something, and Window Needles from SE 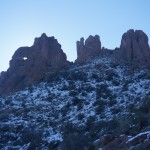 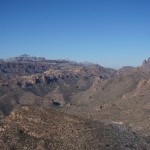 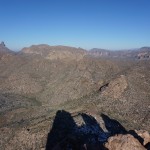 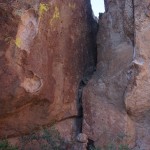 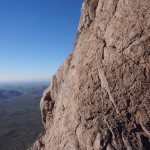 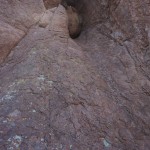 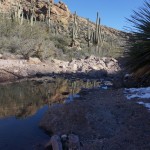 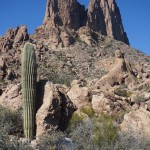 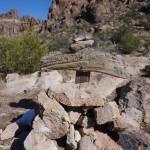 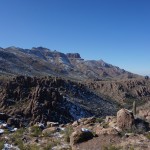 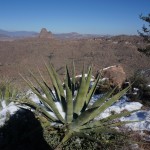 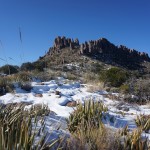 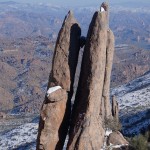 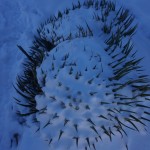 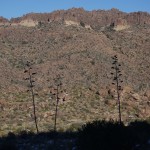