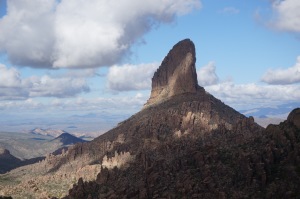 Weaver’s Needle is an impressive fin hidden in the Superstition Mountains. Though only a few miles from Phoenix, it is not visible from the city, and only barely visible from highway 60 to the south. Lying in the heart of the Sonoran Desert, the Superstitions’ many small rock spires are mirrored by forests of saguaro cacti. Though not one of the higher peaks in the range, it is certainly one of the most impressive and popular. Its 5.5 crux, short approach, and scenic surroundings make it one of the more difficult and enjoyable desert peaks. 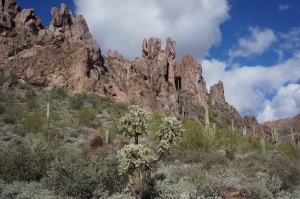 After a late start from Tucson, we shouldered a rope apiece at the Peralta trailhead, and got started around 11:15. Cooler temperatures and a few harmless clouds hung around from the previous day’s rain, making for pleasant hiking up the popular approach trail. With 30-40 cars at the trailhead, I was worried about traffic on the route, but it turns out that the vast majority of people were only out to view the Needle from Fremont or Bluff saddle. We passed people of all ages and levels of fitness on the way to Fremont Saddle, none carrying ropes. 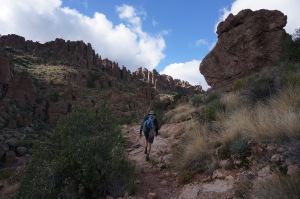 At the saddle, we paused briefly to admire the Needle with the rest of the crowd, then continued on down East Boulder Canyon, where we had the trail to ourselves. As we rounded the west side of the Needle, we heard a dog barking and yelping, presumably frustrated at being left at the base of the route. 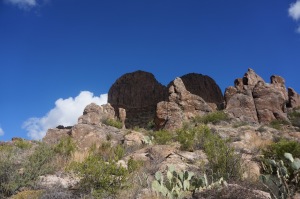 The standard route from the west climbs a steep gully between the highpoint and a sub-summit to its south. Shortly before this gully became visible, Mike noticed a couple cairns next to the trail, and we left the main trail to cross the dry wash to the east. After crossing the wash, we followed a line of cairns upward to the northeast, which leads fairly painlessly to the base of the scrambling. Despite Weaver’s being a popular peak near a major city, there is little or no trail along the line of cairns. 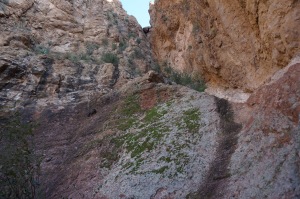 At the base of the class 3-4 climbing we found the source of the barking, a juvenile dog trying desperately to climb 4th-class slabs to reach its master. 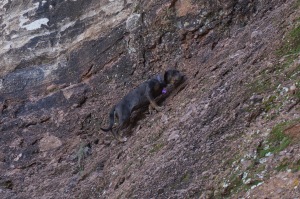 It strained and whined pathetically from its precarious perch near the top, and I felt sorry for it as I scrambled up an easier route to the right. After putting on rock shoes, I scrambled on up the gully/chimney to just below the chockstone at the top. Most of the climbing was moderate, secure stemming on good rock with large holds. The final climb around the chockstone was somewhat more serious, with steeper 5.5-5.6 face climbing to round it on either side; I chose left, and Mike chose right. 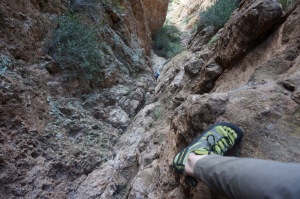 At the saddle, I met the dog’s owners, a guy with surprisingly little patience for loud dogs taking his novice girlfriend climbing. We chatted briefly as they set up a rappel, and I dropped a rope to belay Mike up the final section. I learned that one can descend the gully in two single-rope rappels, so we had hauled the monster 11-pound sport rope all that way for nothing. After belaying Mike to the saddle, I left my rope near the bolts, and we scrambled the rest of the way to the summit. 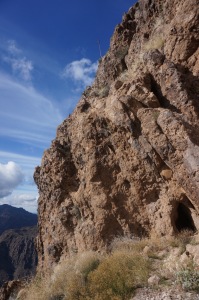 While the route description mentions more technical climbing above the notch, the rest of the climb seemed 4th class, and the rock is surprisingly good. 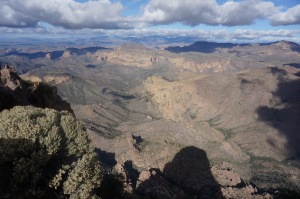 From the summit, fields of small rock spires and saguaros extend in all directions. An arm of the Canyon Lake reservoir is just visible to the north, while bulky Superstition Peak dominates to the west. Though I am not a desert person, the view made me want to explore the spires and twisting canyons. With two more 5.6-ish spires in the vicinity, Miner’s Needle and the Hand, I have an excuse to return. Scrambling back to the notch, we made a single double-rope rappel over the chockstone — might as well use that extra rope! — then packed up the ropes for the hike out. Having carried my light alpine 50m rope on the way out, I was amazed to find that the big cragging 60m weighed almost twice as much. We returned to the trailhead with plenty of daylight left, though not early enough to complete the long drive home. 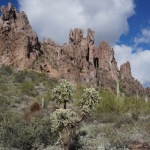 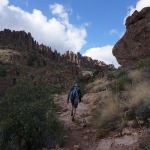 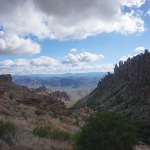 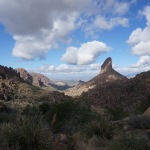 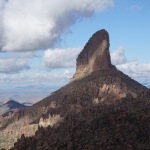 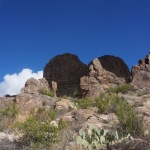 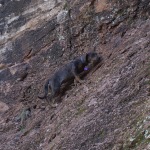 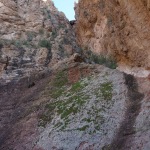 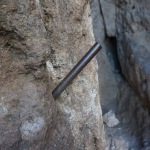 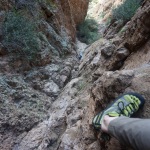 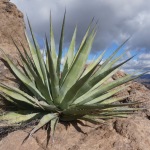 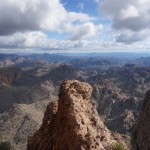 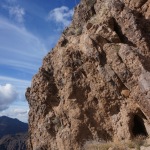 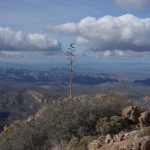 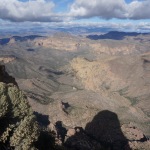 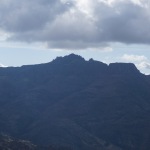 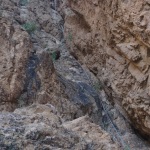