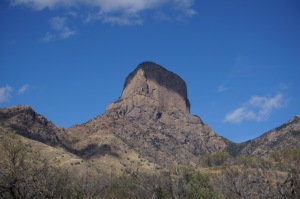 Baboquivari is one of the handful of desert peaks technical even by their easiest routes, and one of the better ones at that. Located southwest of Tucson near the Mexican border, it is most often approached from the west via an Indian reservation, but can also be approached from the east via the Baboquivari Ranch. I had hoped to scramble the southeast ridge (5.6) then descend the standard route (5.2?), but ended up just scrambling up and down the standard route. This was probably for the best, as the standard route would have been hard to find on the descent. 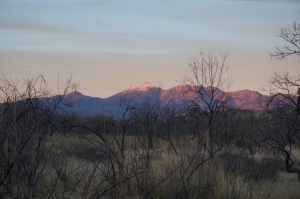 After loading up the van, Mike took off to ride a section of the Arizona Trail, while I drove up through Tucson and around to the east side of the Baboquivari Range. Though my itinerary was all within the United States, I was stopped at a Border Patrol checkpoint on the way north, and passed another on the way back south. The agents were efficient and slightly bored rather than aggressive, peering into the back of the van for a few seconds before waving me on, but I would quickly become exasperated if I frequently traveled south of I-10. 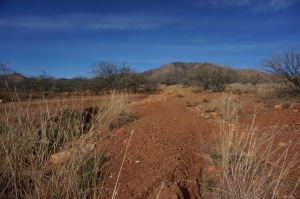 I found the Thomas Canyon road without too much trouble and, after passing through the gate, continued happily on well-graded dirt. I knew this approach required a high-clearance vehicle, so every mile I drove was two fewer miles I had to jog. The road turned van-proof just before a water tank 2.1 miles from the highway, leaving a bit under 5 miles of road to jog to reach the trailhead — not bad. After a false start in which I forgot my rock shoes, I was on my way bright-and-early at 10:10 AM.

Based on my memory of some directions I found online, I turned right at a fork 5-10 minutes’ jog from the car, following two hunters in a pickup who I assumed knew where they were going. This turned out to be a mistake — the correct route continues left past a couple of forks, before finally turning right/north up Thomas Canyon at a 4-way intersection farther west. After jogging past the hunters, I found that my road dead-ended at an old fence, and knew I was off-route.

Rather than retrace my steps to try another road, I continued up-canyon, following decent cow-paths through cactus, ocotillo, and mesquite up the valley to the north. Though I knew I was not on-route, the bush-whacking was manageable, so I continued to the head of the wash, passing occasional debris left by migrants, then started scrambling toward the ridge to the north. 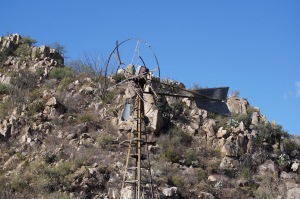 Fortunately I looked back only a short way up the ridge, and noticed a road perhaps a mile to the west. Retracing my steps and following more cow-paths west, I reached the well-traveled road I should have taken, and hike-jogged past the abandoned Clemente Windmill to the ranch gate, arriving around 11:20. My false start and scenic brush tour had only cost 20-30 minutes, so I was still in good shape. 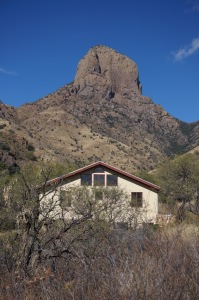 The Baboquivari Ranch house was in good shape, though apparently unoccupied at the moment, with signs directing hikers around to the east. After wandering around north of the house a bit, I picked up the faint trail as it passes right of the corral, then follows the wash north to the saddle east of the peak. Just past the corral, I met the apparent owner of the car occupying the one parking spot at the gate, an older man with a pair of garden clippers. My pleasure at seeing someone clipping the cat-claw away from the trail was short-lived, as the man seemed to have given up only a few hundred yards past where I met him. While the rest of the trail was usable, it was too spiny to run on the descent. 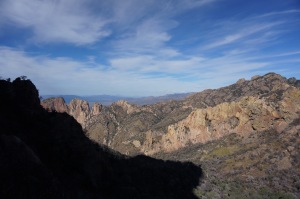 Continuing up-canyon, I followed cairns along the sometimes-faint trail as it crossed and re-crossed the stream-bed. As the wash steepens, the trail switchbacks up the grassy east side, traverses into a slabby gully, climbs the gully, then traverses again to the saddle. It is worth taking extra time not to lose the trail here, as the terrain is steep and spiny. The trail eventually crosses a saddle with a fire ring, where the spectacular cliffs to the north come suddenly into view, then continues up Baboquivari’s north side. 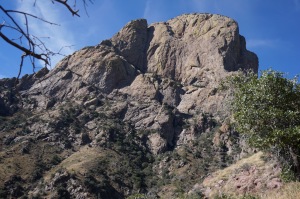 In retrospect, the southeast ridge route is obvious from the approach, crossing the brushy Lion’s Ledge from the saddle right of the peak to a point partway up the left-hand skyline. However, my internal compass was off, so I thought the southeast ridge route must somehow go up the imposingly steep ridge above the saddle. I continued along the trail past the saddle, then ascended a burned ravine to regain the (northeast?) ridge above the brush. After some fun class 3-4 scrambling, I was confronted by vertical walls with no apparent 5.6 route. Traversing around left on outward-sloping ledges turned up nothing I wanted to climb, so I returned to the top of the burnt ravine and continued up and counterclockwise to hopefully rejoin the standard route. 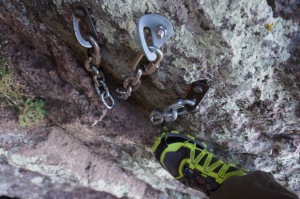 Scrambling up a slot to a chockstone, I climbed fun, pocketed class 4-5 rock to its right, where I found a solid 3-bolt anchor indicating I was some version of “on-route.” 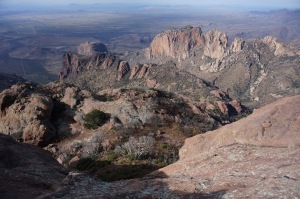 From this point, the route apparently goes up and right, then climbs a broad, slabby face to a 2-bolt anchor with some bright webbing. From there, it traverses right and descends slightly to the base of the “ladder pitch,” where a number of rods and large metal brackets are all that remain of the old ladder. 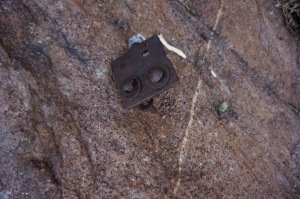 This crux pitch is probably about 5.2; while I did not need my rock shoes, I found the climbing somewhat tricky in my aggressively-lugged running shoes, which edge and smear terribly. 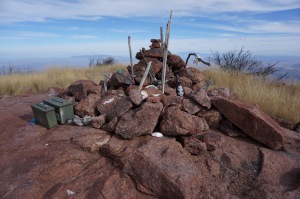 Above the ladder, the route continues right through a notch, then down between some bushes and a cliff face, before scrambling left up a ravine to the sloping summit plateau. The fire, which apparently engulfed the entire upper mountain, has eliminated much of the brush, making the route easier than before. I topped out around 4 hours from the car, probably about an hour slower than if I had stayed on-route the whole time. The summit features bolts and brackets for an old lookout, a large cairn, and various offerings to the resident deity. 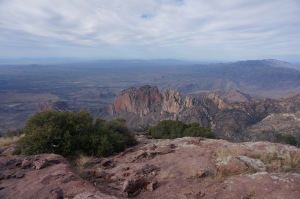 After relaxing on top for a few minutes, I retraced my route. Downclimbing the ladder pitch was somewhat tricky in my running shoes, and I lost the faint trail once below the saddle, but the return was mostly uneventful, and I reached the van well before dark and with a mouthful of water to spare. Despite the wrong turns, this is one of the better desert outings I have done, and I would gladly return for the southeast ridge if I again find myself in the area. 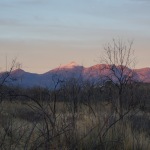 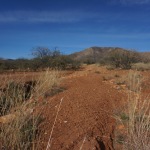 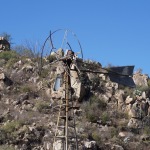 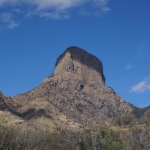 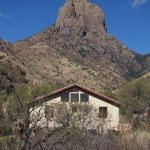 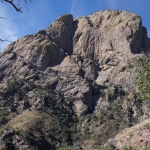 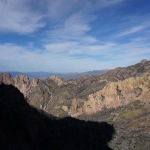 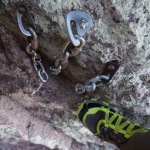 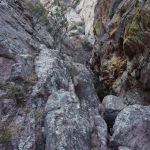 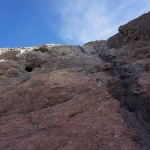 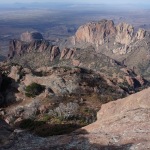 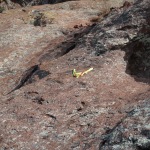 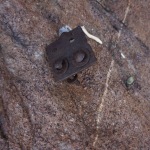 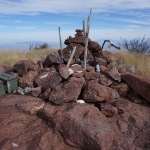 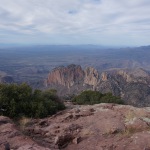 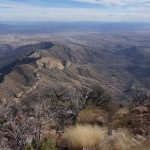 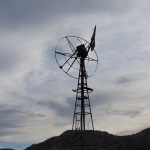