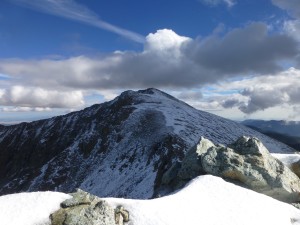 Huerfano is a recently-named centennial peak near Blanca, sharing much of its approach with nearby 14er Mount Lindsey. Sitting next to the Huerfano River in Huerfano county, home to the orphan volcanic plug of Huerfano Butte, the peak was named with absolute consistency and no creativity. Iron Nipple is an unavoidable subpeak on the way to Huerfano, and Lindsey… was just sitting there asking to be climbed. 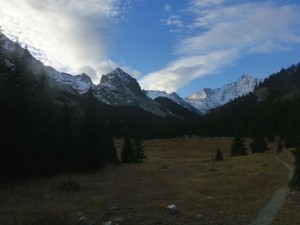 Around 7:00, I was roused from my lazy half-sleep at the upper Huerfano trailhead by another vehicle arriving. After its owner and I made our separate preparations, he outside his car and me inside mine, I summoned the courage to greet my neighbor. Gary turned out to be a friendly older farmer from Illinois, on his annual post-harvest road-trip to Colorado. After we talked for awhile, he left me with a sample of his tomato crop, getting a brief head start while I finished my morning routine. 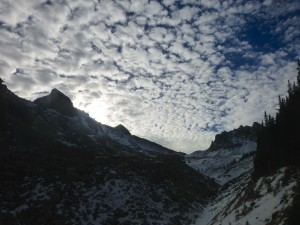 While I remembered a considerable amount of cross-country travel on the non-obvious route to Lindsey in 2010, this time I found that the route to the saddle had essentially become the valley’s main trail. I passed Gary and another man who had started at the same time, then followed a well-trod boot-pack up to the saddle. From there, some old footprints led across turf and boulders to Iron Nipple’s short 3rd-class summit ridge. 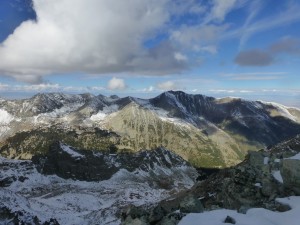 After reading through the expected juvenile humor in the summit register, and making my own lame contribution, I scrambled down the northeast side of the Nipple, then made my way across sometimes-supportive snow and talus to Huerfano, the day’s main objective. Looking for the highpoint and/or register, I scrambled north a short ways, then returned, loosing a fridge-sized boulder into one of the chutes to the west. After finding a sunny and more permanent perch, I sat down for a snack and watched the clouds play on Lindsey. 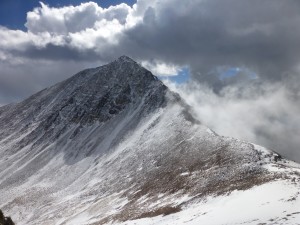 As I started back for the saddle, I saw a figure making his way from there to the base of Lindsey’s northwest ridge. Though I had not planned to tag the 14er a second time, I remembered some fun scrambling along the ridge, and was curious who I had seen. 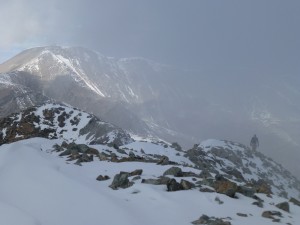 The standard route traverses the north face well below the ridge, then ascends a steep gully near where the ridge flattens below the summit. Since this was likely to be somewhere between unpleasant and perilous in fresh snow, I instead gained the ridge early, scrambling through a few 3rd-class notches and one snowy, fairly spicy 4th-class step. Above the step, I caught the climber I had seen from near Huerfano, who turned out not to be one of my trailhead companions. He seemed to be moving well, but I was a bit quicker, reaching the summit a couple of minutes ahead.

In walking conversation as the clouds started to turn more serious, I learned that while Julian and Yours Truly have similar mountaineering objectives and styles, he is a much more accomplished climber and ultra runner. However, he hesitated on the sketchy downclimb of the 4th-class step, taking some time to find an alternative more to his liking. I glanced back occasionally as I scrambled the ridge to the saddle and jogged on along the trail, but he seemed to be taking his time. I ran across Gary on the way down, learning that he had, probably wisely, decided not to try Lindsey in its current condition, then jogged on to the trailhead. After a stop in bustling La Veta, I headed south toward covert hardship. 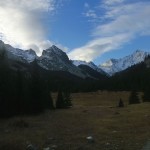 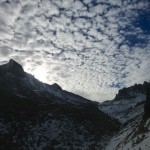 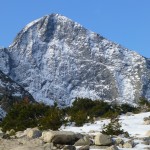 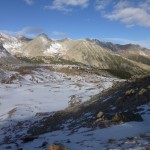 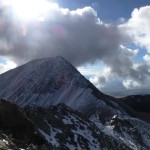 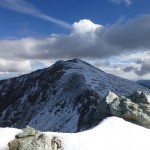 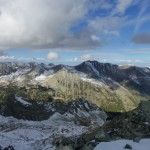 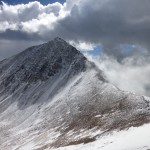 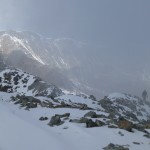