Ted, my Rainier partner, is working on finishing the Colorado 14ers, while I’m half working on Colorado’s top 100 (“centennial”) peaks. Since most of the 14ers he still has to do are fun, and could be linked with nearby centennial peaks, we headed down to Westcliffe. After some confusion and delay, we drove up to the new, obnoxiously-low trailhead below South Colony Lakes to get some sleep before an early start. 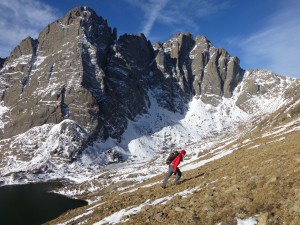 We hiked the road by headlamp, reaching the old 4WD trailhead a bit before sunrise. Continuing on a new trail toward Humboldt, we reached the sun near the upper lake, then cut straight up across the snow-filled switchbacks to the saddle between Humboldt and the “Bear’s Playground,” a jagged 3rd-class ridge leading west to the broad, high plateau between Crestone Peak and Columbia. 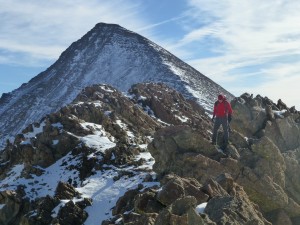 Surprisingly for so early in the season, the northeast edge of the plateau already had a substantial cornice, with recent avalanche debris below. 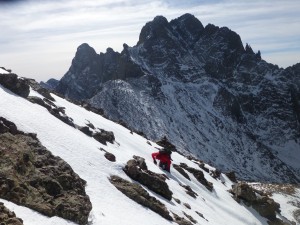 The stripes of snow crossing the plateau were annoying breakable crust over ankle- to calf-deep sugar. We wound our way across, then found some cairns and bits of trail contouring across talus around a nameless 13er to the saddle east of Columbia, which drops steeply toward the partly-frozen upper Willow Lake on its north side. From there, the first summit was a short class 2-3 scramble up a broad face. For some reason, this area has been chosen to name peaks for exploded space shuttles; along with the summit register, we found the first of two memorial plaques on Columbia’s summit. 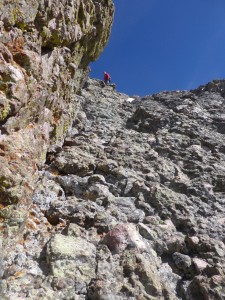 The standard route from Columbia to Kit Carson, somewhat south of the ridge, is apparently 3rd class, but in my running shoes, I preferred to follow a drier 4th-class route, and Ted foolishly followed. After the initial downclimb, a step-across and a bit of a knife-edge lead to Kit Carson’s southeast face, where any number of class 2-3 lines lead to the summit. On a clear, calm day, we spent some time admiring the snowy Crestones to the southeast, and distant Pikes Peak to the northeast, standing well east into the plains. I also learned that it is apparently a thing these days to pose shirtless on summits; human beings are strange. 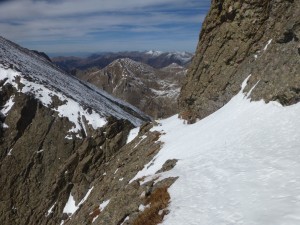 After some time on the summit, we headed down to the ledge leading around Kit Carson, and postholed our way around to the saddle with Challenger. 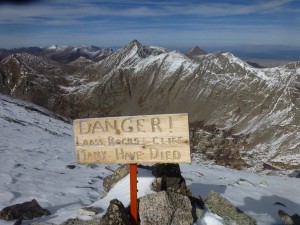 Passing an amusing sign, we scrambled up the left-hand side of the uninteresting talus mound known as Challenger to another plaque. We had initially hoped to climb Kit Carson and Challenger, then circle back over the Crestones, but it was clear that we would not have nearly enough time. The Crestone cleanup was a long day even during the summer and before they gated the road farther down, and Ted was feeling slow, burdened by Real World concerns and dot rubber (especially useless on snowy rock). 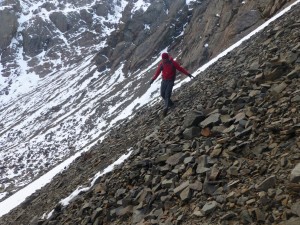 We retraced our steps to the plateau north of Crestone Peak, admiring some interesting-looking ice below its north couloir. Rather than re-cross the Bear’s Playground, we dropped straight down a loose talus chute, which turned out to have some excellent boot-skiing. The talus in the valley below was less friendly, but we eventually rejoined the trail, hiking the last part and the road back to the car by headlamp. We had planned to tag some more 14ers over the next couple of days, but Ted was feeling worn down, so after driving him down to his car, I cooked a hasty dinner and went to sleep. I would decide in the morning what to do next. 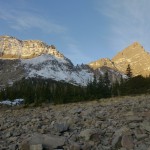 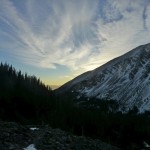 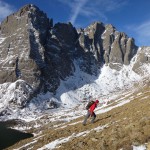 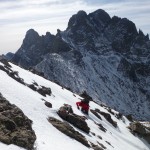 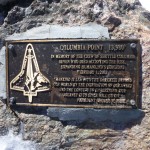 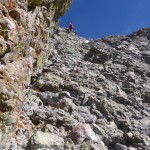 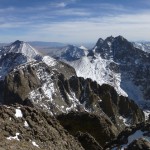 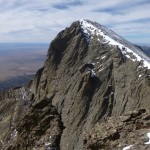 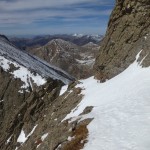 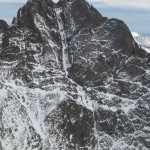 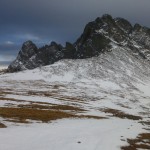 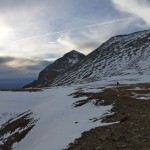 Sunset on the plateau 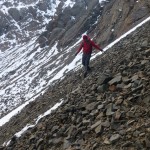