A hundred years ago, it was standard mountaineering technique to tie people together about the waist in groups of three, four, or more on all types of treacherous terrain. If one fell, the others could hopefully brace themselves to catch the fall. For a particularly difficult section, one person might climb past it to stance, then take in the rope in a hip or shoulder belay.

Since then, both technique and the assessment of difficulty and risk on rock have improved dramatically. Except for guides moving with clients over easy terrain, climbers rarely travel three or more to a rope without placing gear. The closest modern technique is “simul-soloing,” where two climbers move simultaneously over relatively safe ground with at least one piece of gear between them.

Risk assessment is similarly more advanced. With finely-graded difficulty scales such as the Yosemite Decimal System, climbers can choose the appropriate technique based on their ability and tolerance for risk. On a route rated 5.4, one team might scramble unroped, another simul-solo, and a third use fixed belays, all of them taking equal risk.

In sharp contrast, we still have hundred-year-old ideas about technique and difficulty on glaciers. The standard modern glacier-crossing technique is still to assemble teams of three or more and walk along without intermediate protection, possibly performing a boot-axe belay around a questionable crevasse crossing. While there is little to be done about technique other than crazy setups like carrying long poles under one’s arms, there should be a difficulty rating system for glacier crossings, so that one may choose a suitable level of protection.

I came into this season somewhat apprehensive about any kind of glacier crossing. Having seen and crossed a variety glaciers, I found some completely safe, others safe with some care, and a few sketchy. Here is a rough ranking with some notes. 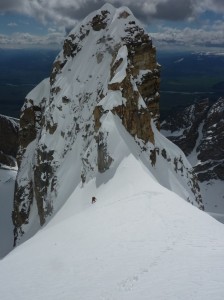 Just about anyone can cross these unroped. 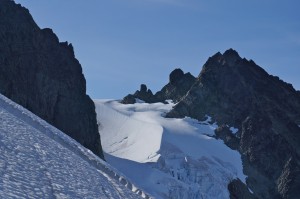 You should pay some attention here, but are unlikely to face serious risk or difficulties. 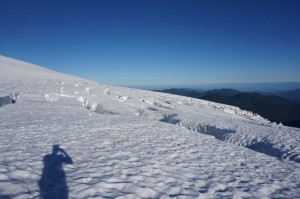 These require some care, and a rope may be desirable. 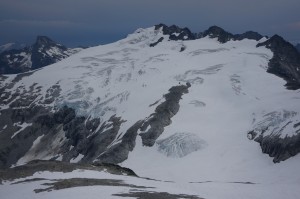 These probably involve some unavoidable risk, and a rope is usually a good idea.
This entry was posted in Meta. Bookmark the permalink.