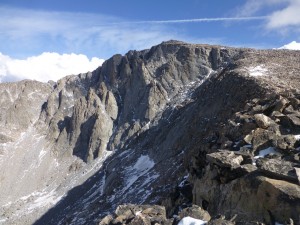 Cloud Peak is the highpoint of the Big Horn (not “Bighorn,” for some reason) range in north-central Wyoming, a small, isolated range between Greater Yellowstone and the plains. 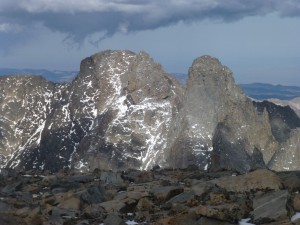 The range’s isolation gives Cloud over 5,000 feet of prominence, which is what brought it to my attention. The Big Horns are home to two peaks over 13,000 feet, Cloud and Black Tooth, a fairly healthy glacier, and some surprisingly sheer granite. The terrain is reminiscent of the southern Winds, with most peaks being flat on the west side and glacially-carved on the east, though Black Tooth and Mount Woolsey (or “The Innominate”) are carved on all sides. 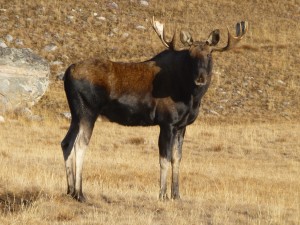 After sleeping in the completely-deserted West Tensleep trailhead lot, I started off sometime between dawn and sunrise, hiking up the trail toward Mistymoon Lake. Though I had the area to myself, this trail apparently sees a great deal of horse and foot traffic during peak season. With a couple hours’ uneventful hiking through woods and meadows ahead, I turned on a podcast and tuned out. Entering one meadow, I was startled by a bull moose who, during hunting season in a national forest, should have been far more wary of me. Perhaps he only sees humans wearing orange and camouflage as threats. In any case, he started at me from 50 yards away, then meandered along the trail ahead of me, glancing back from time to time, before finally getting out of my way in the woods. 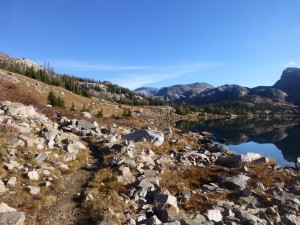 The trail climbs intermittently past lakes Helen, Marion, and Mistymoon, then turns west to descend out of the range. Following the standard route, I left the trail after it descends into a marshy flat and, near a small waterfall, found the cairned climbers’ trail to Cloud’s southwest talus ridge. The talus was surprisingly pleasant, with stable boulders alternating with tundra, slabs, and bare dirt, and I soon found myself near the broad crest.

Following the crest toward the summit, I admired the surprisingly steep west face, which reminded me a bit of a mirror image of the trail up Mount Whitney. Like Whitney’s, Cloud’s summit is a broad, flat boulder plain; a cairn on one boulder seemed to mark the highpoint. Around this plain, sharp ridges extend north to Woolsey and Black Tooth, and east on either side of the Cloud Glacier. Steep granite cirques on all sides offer technical climbing opportunities and scenic camping near alpine lakes. 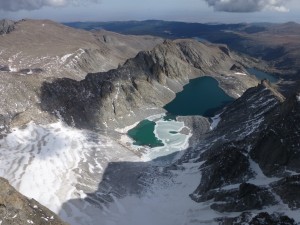 Though Black Tooth beckoned, there seemed to be no easy direct route, and the way back and around via Middle Cloud Peak Lake was too long for me, especially with the growing clouds. After a cool summit nap, I retraced my steps, once again zoning out on the long trail. Despite its being a Friday afternoon, I met only one other party, a group of three with overnight packs, presumably bagging Cloud as an overnight. 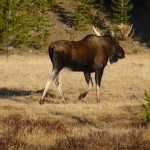 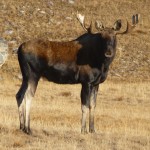 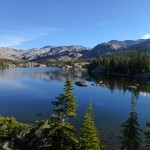 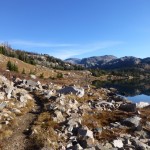 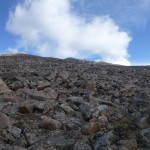 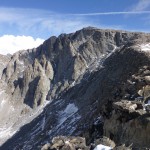 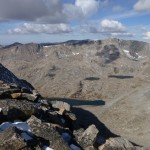 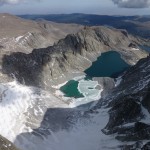 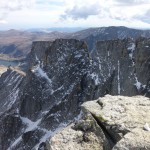 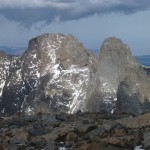 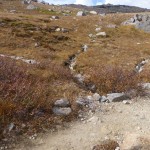