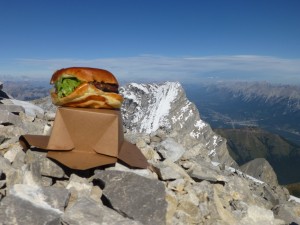 Mount Lougheed is a series of four summits in a northwest-to-southeast line south of Canmore. While the second summit is the highest, the northernmost summit is the most challenging, and a traverse of the four summits is a popular 5.4 scramble. I had originally thought of doing the traverse, but when Bob, who I had met on Temple, expressed interest in doing an easier route on the second and third peaks, I decided to do that instead. It would be the last good day of climbing before an unseasonable summer snowstorm. 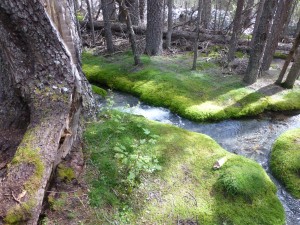 After dinner at the Grizzly Paw Pub in Canmore, we drove up to the Goat Creek parking area to sleep in our respective cars, then carpooled up to Spencer Creek the next morning. While shuffling gear, we were joined by a man with a rifle and pit bull, out “hunting” in the sense of going for an armed stroll in the woods. We quickly left him behind, following a well-worn trail through a surprisingly lush, mossy forest. The trail continues through the woods above the left side of the creek, eventually emerging in a grassy bowl between Lougheed and Sparrowhawk. 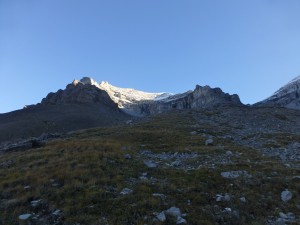 Here the trail briefly disappears, but the route up Lougheed 2 to the north is obvious. After making our way up the grassy slope, we rejoined a climbers’ trail up the long scree slope. The softball-sized scree was relatively stable, and the trail made things even easier. 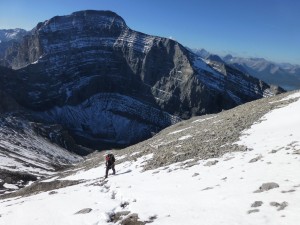 Near a rock band, we followed a boot-pack across some snow to the right, passing over a small ridge at a well-cairned notch to access the next slab/scree bowl over. Here we climbed a mixture of snow and scree, following some boot-pack and some fainter bits of use trail. I tried to stick to the rock in my running shoes, while Bob took advantage of the snow in his boots. The route more or less follows the path of least resistance through scree and slabs, heading up and right toward the obvious summit ridge. Reaching the ridge, we continued a couple hundred yards along the snowy ridge to the summit. 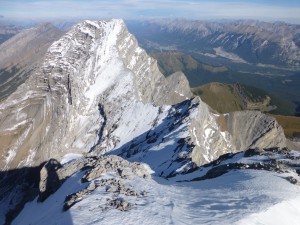 Though there was some wind, the summit was fairly pleasant. Looking northwest, I could see a faint trail leading to Lougheed 1, the slightly shorter but more challenging summit. Enough snow remained to make the traverse less than appealing in trail runners. To the southeast, Lougheed 3 looked like an easy walk, Lougheed 4 an intimidatingly steep and wet scramble. With good weather and plenty of daylight, we chose to return via Lougheed 3. 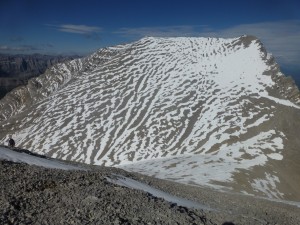 After descending a bit of unpleasantly loose scree, I resigned myself to having cold, wet feet, plunge-stepping down ankle- to calf-deep snow to the saddle. This side of Lougheed 3 is also quite loose, so I followed patches of wind-packed snow where I could, the lugs on my trail runners gripping admirably. From the unremarkable summit, it looked like the route up Lougheed 4 might follow a gully right of the ridge, which was currently half-filled with snow, making it more of an undertaking than we were equipped to handle. 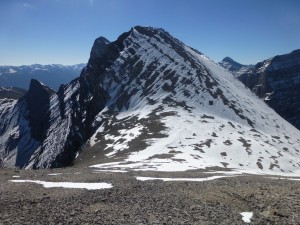 Heading down left of the saddle with Lougheed 2, we found some surprisingly skiable scree. From where we reached the gully, it was a long side-hill back to our ascent route. Somewhat surprisingly so late in the day, we passed two men headed up: an old-timer looking a bit like the gyro captain in “Mad Max 2,” and a younger man carrying an enormous quantity of camera. Farther down, we again met the man with the gun and dog, returning empty-handed as he had predicted. Apparently our peak-bagging was just as incomprehensible to him as his armed hiking with a huge external frame pack was to me. 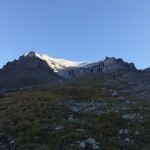 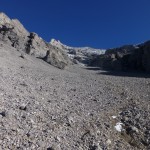 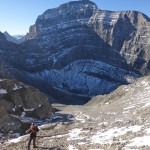 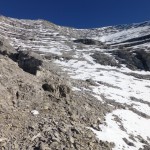 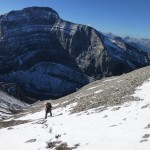 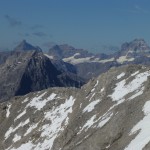 Assiniboine to the SW 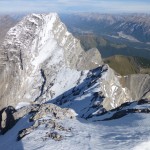 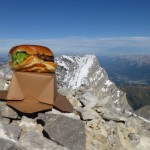 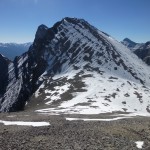 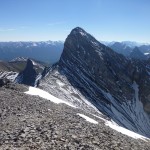 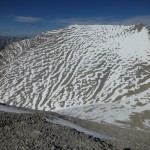 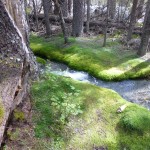