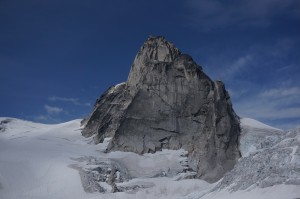 The Bugaboos being mostly a place for Real Climbers, I had planned to skip them entirely. However, feeling a passing lack of ambition, and having been encouraged to visit them by Canadians met on the trail, I decided to play tourist there for a bit. They are a bit like the Cirque of the Towers — huge granite walls an hour down a dirt road from a podunk gas station — but with the glaciers that carved those walls still in place. I drove the road, chicken-wired my car with one of the hundred rolls left in a corral, and hid from the mosquitoes in back of my car. 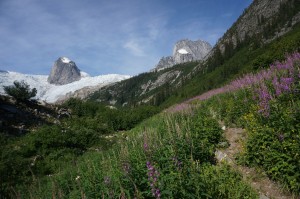 The west ridge of Pigeon Spire is the easiest thing in the central Bugaboos, so I decided to do that. Getting a late start, I sweated my way up the trail to the Kain hut, admiring the lower section of the huge Bugaboo Glacier. I had read on SummitPost that the most common approach route through Bugaboo-Snowpatch Col was ugly thanks to an open bergschrund and lots of rockfall — thanks, global warming! — so I approached up the Bugaboo Glacier, on the other side of Snowpatch Spire. After skirting most of the lower glacier, I followed an old boot-pack up the last part to the ice plain below the Snowpatch-Pigeon icefall, then up the somewhat more crevassed upper glacier and around Pigeon’s west side. 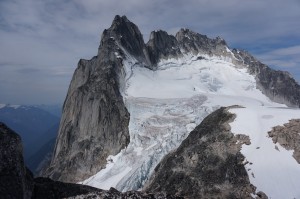 At the col, I found a sign pointing to a pit toilet, and a couple of roped teams descending. After admiring the Howser Towers and their fearsome glacier/bergschrund approach, I started up the supposedly 5.4 west ridge. Partway up, I met a fellow soloist, fishing for his smartphone in a crack. I tried to put my scrawniness to use and retrieve it, but came up a foot short. As he returned to the col to retrieve an ice tool to help with the recovery, I continued up the ridge. 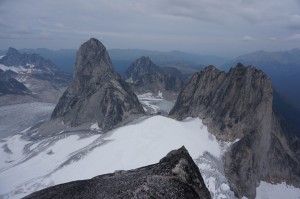 I found one exposed hand traverse, and a few similarly-exposed balance-beam sections, but nothing that felt 5.4 on the initial climb. The route levels out and crosses a few false summits before climbing the left-hand side of the true summit. I finally found a few possibly-5.4, non-exposed moves downclimbing one of the false summits, and some low 5th class slab leading up the true summit. Descending from summit, I went farther east before cutting back, and found an easier way to avoid the slab. On my return, I noticed the phone had been recovered, but my compatriot had already started on the descent. Since he had a rope, he chose to rappel next to the Snowpatch-Pigeon icefall; ropeless, I just retraced my steps. 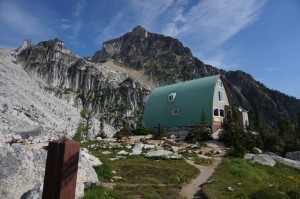 Since the day was still young, I stopped in to check out the hut, and found it even more luxurious than the one near Assiniboine, with a large kitchen area, a dining room, and bunks with padded mattresses. The friendly Scottish-Canadian caretaker offered me tea with milk and fig bars, so we sat and talked for awhile. He confirmed that the Bugaboo-Snowpatch col was ugly and dicey, squashing my vague ambition to do the Kain route on Bugaboo Spire. Later, an American couple on an epic climbing road-trip came in with vast quantities of gear, and I talked with them over yet more tea. After waiting out the afternoon rains in the hut, I made the short hike back down to the parking lot, thinking about how my no-partner, not-staying-in-the-hut approach was probably the Wrong Way. 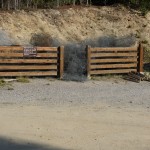 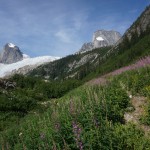 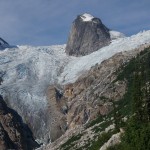 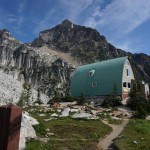 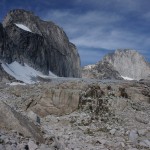 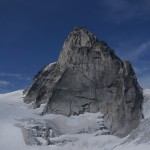 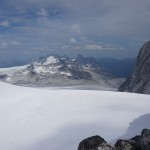 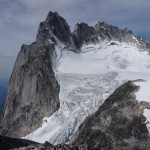 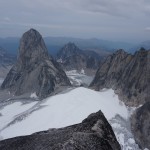 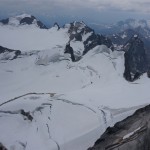 This entry was posted in Canada, Climate. Bookmark the permalink.