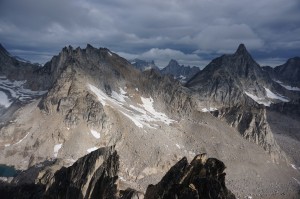 I had to figure out something else to do to make the long drive up to the Bugaboos worthwhile. The hut caretaker had suggested the southeast ridge of Eastpost Spire and, looking at a topo and guidebook in the hut, it seemed I could make a day of it by traversing on around to Northpost Spire, then out the Cobalt Lake trail. In classic Dr. Dirtbag style, I had my most challenging day in the area tagging peaks no one cares about. 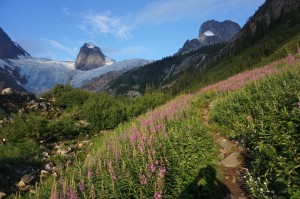 Getting an earlier start, I had a better view of Marmolata while repeating most of the approach to the hut. I left the trail at a flat just before the hut, heading north up gullies and krummholtz-infested class 3-4 rock to reach the ridge. The lower ridge involved some scrappy low-5th-class climbing on lichen-covered rock and the odd plant, though the underlying rock was decent. Higher up, the ridge eased off to more consistent class 3-4 scrambling, with a bit of interesting route-finding on the final, steep section to the summit.

Perusing the register, I found that Eastpost’s lack of glacier travel and ease of scrambling makes it quite popular. Looking northeast, I examined the rest of my route and watched a pair of climbers playing around on the shorter Cobalt Lake Spire. Ignoring the shiny rappel anchor on the summit, I scrambled down and around the east side, then followed cairns and bits of trail to the Eastpost-Crescent col. 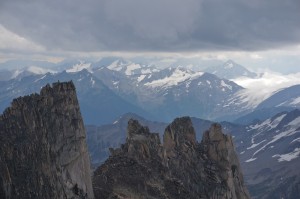 The traverse from this col, through the Crescent Towers to Crescent Spire, was the day’s biggest unknown, and proved to be the greatest challenge. I started up from the col on a long, loose class 2-3 scramble before things got a bit trickier near the first tower. I passed a gratuitous bolted rappel anchor on the cairned route, then bypassed a couple of towers to the right and left. On the next, I was blocked by a vertical headwall and right side. I descended a loose gully on the left to where it joined a gully past the headwall, then scrambled up this gully and over an easier-than-it-appeared nest of chockstones to reach easier ground. Not especially interested in the Towers, I skipped tagging the summit. 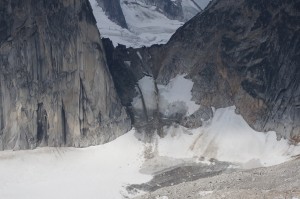 For the final Tower, it looked like I could climb down and around the left-hand side on lots of loose sand and scree. Reluctant to subject myself to such abuse, I scouted the steeper right-hand side, trying to pick out a sane route up the slabs and dihedrals, and around a few roofs. I eventually found a way up some moderate ground to a roof, liebacked around a corner to the right, then carefully climbed a face and right-facing dihedral to the ridge just north of the summit. Having gone to so much trouble, I backtracked enough to tag this summit, the highest of the Towers. 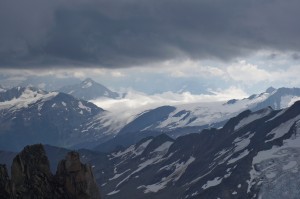 From there easy scrambling led to Crescent Spire, which looks like neither a crescent nor a spire from this direction. The weather was looking gray and unpleasant, so I hung out awhile to see if it turned threatening, preserving my option to drop down the dirt-chute to the Crescent Glacier. Conditions seemed to be getting no worse, so I eventually made my way down boulders and some loose talus toward Brenta Spire, where I found a faint, cairned trail. The climb up Brenta’s south ridge was mostly class 2-3, with some fun, harder climbing including a short chimney near the summit. The clouds unfortunately decided to close in, so I reached the summit with little view of the route ahead.

Oh, well — I was committed now. Brenta’s north ridge started out mostly easy, then became a bit trickier near the saddle with Northpost. The clouds had lifted, to be replaced by rain, and I saw some tricky-looking steps and a steep headwall on the ridge ahead, and dubious, slabby steps down a sort-of ridge to the glacier above Cobalt Lake. Unhappily wet and reluctant to push my luck on wet rock, I climbed back toward the ridge to wait out the showers in a nice cave, eating my last sandwich while listening to some NPR.

When the drizzle paused, I started down the slabs toward Cobalt Lake in defeat. However, the clouds surprisingly broke, while the descent looked increasingly unpleasant, so I optimistically returned past my cave to the ridge, making my way across some easy ground to the first step I had seen. Here I found an old rappel sling, and steep, exposed climbing on all sides. Worse, the turf and moss were muddy and loose, and the thick black lichen on many of the rocks was incredibly slick when wet. I adjusted my climbing accordingly, distrusting small edges and even low-angle slabs. 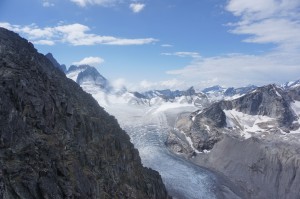 Fearing defeat, I spied a ledge apparently leading around the impasse on the northwest side of the ridge. Retreating 100 yards from the impasse, I managed to link together a series of ledges passable when wet to reach it, and was pleased to find that it went. Contouring along far above the retreating Vowell Glacier and the wasteland of scree and pea-green water left behind, I was surprised to see a small tent city below the terminal moraine. 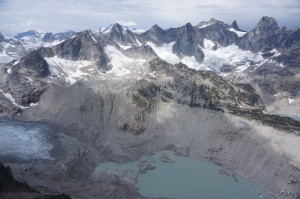 Nearing the headwall, I was encourage to find that it was not as steep as it appeared from Brenta. I returned to the ridge, then traversed left on an improbable ledge with a single cairn. Ascending a short series of gullies and class 3-4 rock, I happily reached the summit, sparing myself a choice of terrible bail-out options. 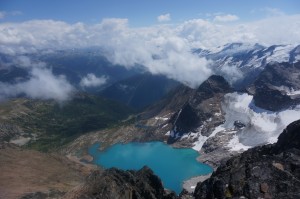 Seeing a trail in the scree below, I thought I was done for the day: scramble down to the Cobalt Lake trail, jog the trail to the road, hike the road to the Bugaboo trailhead, done. Descending some moderately annoying terrain along the east ridge, I found some flagging near the outflow of Cobalt Lake. I followed the flags for awhile, then gave up when they disappeared, as they did not seem to mark a trail.

I foolishly assumed that the trail paralleled the outflow stream, and that I could pick it up farther down. Heading off cross-country, I followed various game trails through open meadows, then began to encounter more difficulties as the valley narrowed and steepened toward its junction with Bugaboo Creek. Cutting back and forth in an open section, I saw no sign of a trail on either side, and gave in to the ‘schwack. This probably cost me less than an hour versus the trail, but involved much suffering. Progress became increasingly difficult, with the crux being some class 3-4 brush getting around a cascade and cliff band. From the top of the cliffs, I concluded that I was probably west of the Bugaboo trailhead, so at least I could pick up the main trail at the valley bottom. Climbing over endless wet logs and through stiff pines, I eventually reached flatter ground, then wallowed through ferns and the occasional devil’s club to find the trail maybe half a mile from the trailhead. Filthy and spent, I jogged past the fresh climbers to my car, did some basic hygiene work, then set off on the long drive back to civilization. 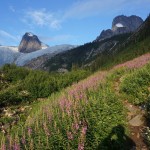 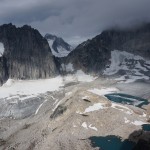 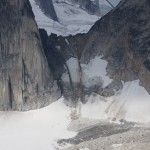 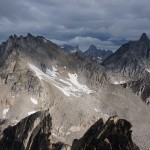 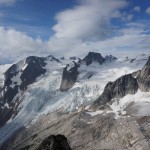 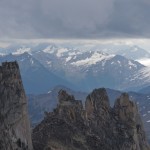 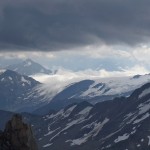 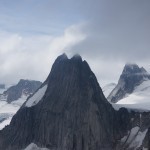 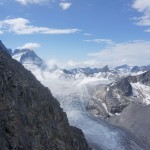 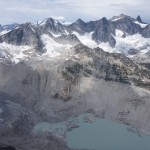 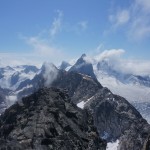 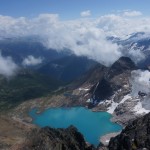