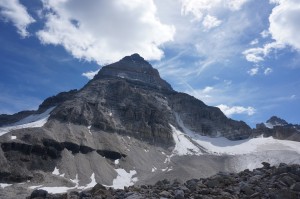 From the northeast, Mount Assiniboine is a postcard peak, a perfect pyramid, flanked by glaciers, rising above Lake Magog. At 11,800 feet, it is also one of the Canadian Rockies’ highest peaks, dominating its surrounding area. Like many peaks in the Canadian Rockies, it is a giant choss-pile, with the north ridge being one of the few relatively solid lines on the peak. 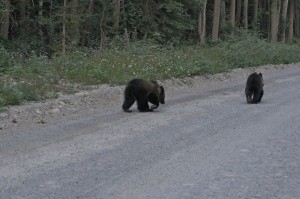 Though scenic, the northeast approach is extremely long, and an unaesthetic approach from the southwest has become standard. Coming from Rogers Pass, I drove south to Radium Hot Springs (still popular, though I’m not sure if they sell glowing souvenir flatware), then up Highway 93 to the dirt Settlers’ road. Less than a kilometer from the pavement, I passed a mother grizzly and her two cubs, walking nonchalantly along the road. Great.

The well-graded main road winds through a logging wasteland, past a few summer homes, to an open pit mine, where a small side-road leads a couple more miles to a small parking area. Pulling in late on a Saturday, I found four cars and no spare chicken wire to protect my car from porcupines. I have never had a problem with them before, but I sprayed a bit of bear-mace on the underside of my car in half-hearted defense before going to sleep. 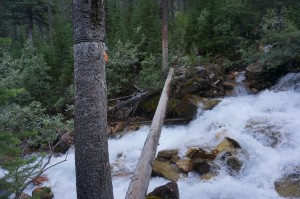 Waking up to clear and slightly chilly weather, I got a late start around 6:50, macing my car again before heading up the obvious trail past the trail register. Mace at my side and headphones in my pocket, I hiked quickly and warily up the steep but mostly good trail, crossing two streams (one with improved log) and some boggy terrain before reaching blue-green Lake Assiniboine. 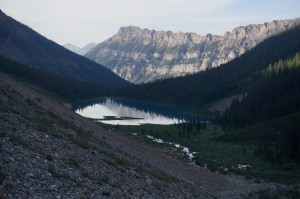 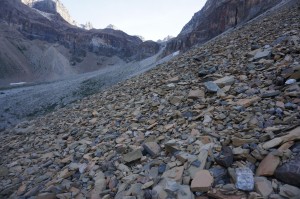 Below the lake is standard subalpine forest; above, a barren wasteland of choss and snow, reminding me of photos of the approach to Aconcagua. The maintained trail ends here, though a faint climbers’ path appears in places. I took a bad line on the way up, straying too high to the right on loose talus before regaining the faint trail on flatter ground. After slogging up the loose scree gully to the right, I foolishly ignored a cairn at the low-point of the old moraine, figuring I could cut back to the trail higher up after climbing easier ground. This was not true: I was “cliffed out” by a treacherous, rock-hard dirt slope strewn with gravel. Retreating some, I eventually crab-walked down a shorter, lower-angle part of this slope, clinging to embedded rocks and imagining the painful slide to the bottom. 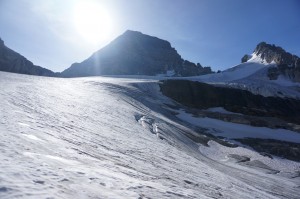 Chastened, I followed the base of the valley to some much-appreciated snowfields, where I found tracks from the previous day. Reaching the toe of the glacier, I put on my running-shoe crampons, then walked easily up the low-angle snow and ice. This late in the season, the few crevasses present were exposed, but the crevasse-free line would have been fairly clear in any case. Unlike for rock and ice, there does not seem to be a rating system for difficulty of glacier crossings, but there should be: having seen and crossed a variety of glaciers this season, I have seen huge variation in challenge and risk. The standard rule to always rope up on glaciers is as absurd as a rule to always rope up on rock. End rant. 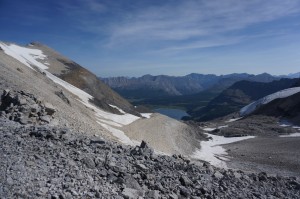 Near the lowpoint of Assiniboine’s northwest ridge, I got off the snow, slogged up terrible loose scree to the ridge, then down bigger loose talus to the snowfield leading toward the ACC hut. Though I could have cut over short of the hut, I decided to head over and check it out. It proved to be amazingly comfortable, with two big bunks, airtight-looking windows and door, and even a sink and hot-plate. A Russian woman hanging around nearby asked me if I were headed up, then if I wanted some tea beforehand. I politely declined, then stashed my axe and crampons at the hut before crossing yet more talus to where a climbers’ trail forms at the base of the north ridge. 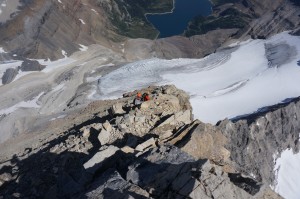 Spoiled by Sir Donald’s excellent rock and interesting climbing, I was displeased to find a lot of loose rock and class 2 walking on the route. Heading up late in the day on a summer weekend, I found myself below a dozen climbers downclimbing and rappelling the debris-littered outward-sloping ledges. Though they were all very well-behaved, rockfall was inevitable. I cautiously kept my music turned off, peering uphill into the sun as I tried to stay out of potential rockfall paths. The best approach, I found, was to stay as far left as possible (near the ridge) trading slightly harder climbing for more safety. Most of the climbing was no harder than 4th class, except for one red and one white step, with the red being hardest because of worse rock. 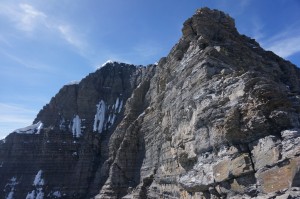 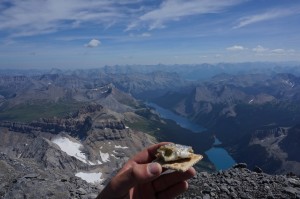 I reached the summit about 1h30 from the hut, and found it perfectly calm and warm. From both the upper ridge and summit, my eyes were drawn in amazement and horror to the near-vertical choss of the east face. When the weather is cold enough for ice to hold everything in place, people climb it! Wishing I had a map, I spent about half an hour with my fish on the summit before retracing my route. Despite having to move carefully because of parties below me, I found the descent much easier than Sir Donald, reaching the hut in 1h15 or so. 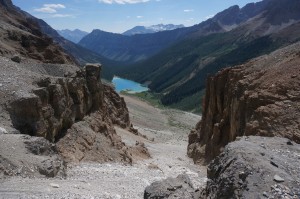 I grabbed my things, talked with the Russians for a few minutes, then started for “home.” After crossing the choss-ridge, I chose a snowy line on the glacier and did not even need my crampons. Knowing which path to take down to Lake Assiniboine, I made great time on the descent, passing a couple of descending parties and several groups on their way up. I jogged some sections of the trail below the lake in a half-hearted attempt at speed, reaching the trailhead just under 10 hours out. 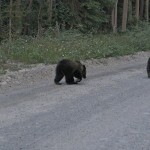 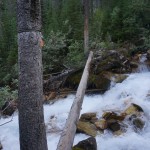 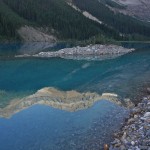 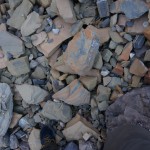 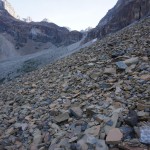 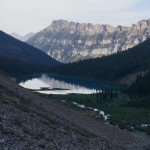 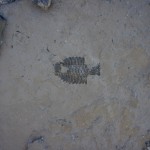 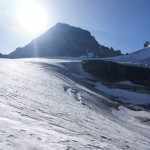 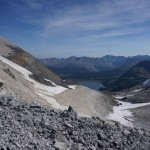 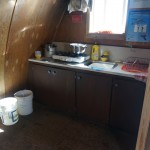 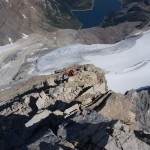 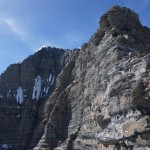 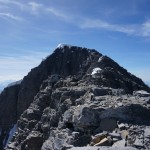 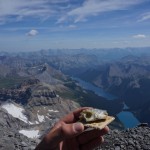 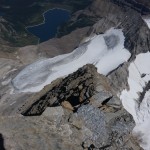 View down ridge from top 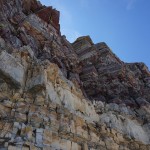 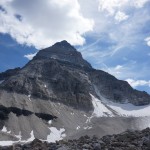 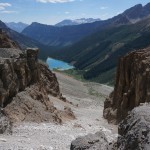 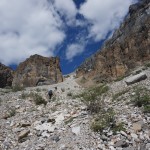