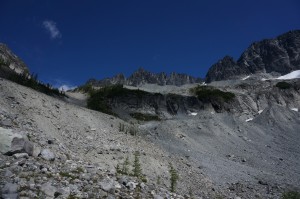 The Chilliwack Group is a cluster of high, sharp peaks in far northern Washington, most easily reached from Depot Creek in Canada. I had hoped to traverse Spickard, the Mox Peaks, and Redoubt in a day, but ran out of motivation and only tagged Spickard. Assuming difficulties could be solved on Redoubt’s east ridge (supposedly class 3 with a short aid section), it looks possible to stay high and do the traverse car-to-car in a reasonable day. For now, I will have to settle for the long, scenic approach and the view from Spickard, one of the best in the range. 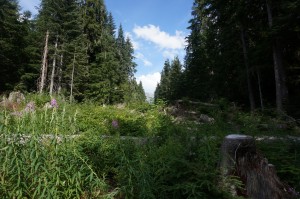 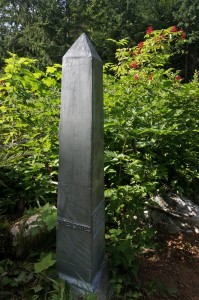 From the open area where I parked next to two other cars on the Depot Creek road, I hiked the road as it became decreasingly drivable, eventually turning into a sometimes-boggy footpath. Following the flagged path, I soon emerged in the brushy clearcut of the US-Canada border, passing border post number 65 and, just on the American side, the usual sign and register for an “unmaintained climbers’ path.” 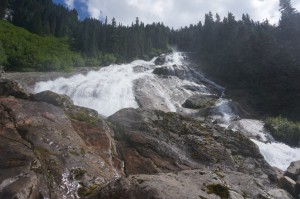 The path is faint and blocked by deadfall, but well-flagged and usable. Care must be taken when crossing the deadfall, as Devil’s Club is often hidden among the graspable plants nearby. After a long, flat trek through the old-growth forest near Depot Creek, it climbs the east side as it reaches the steep valley headwall. Here two streams fall 600 feet in huge cascades before meeting to form Depot Creek. The trail crosses the left-hand stream on a trio of healthy alders, then crosses the slimy, wet rock between them to gain the forested slope. The rock portion can be unnerving, as the mist keeping the rock slimed is gradually soaks and chills the climber, hastening him through this treacherous section. While not necessary, the two fixed hand-lines can be reassuring. 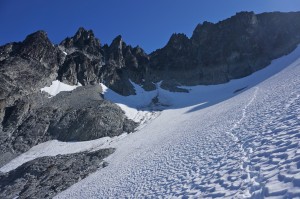 One through the slimy rock, the trail ascends more or less straight up through talus and woods to the bowl below Mount Redoubt at 4,800 feet. Here it splits into two faint use trails, one leading to the Depot Glacier west of Redoubt, the other up the endless talus-valley to Spickard. I chose the latter, following cairns and the path of least resistance to near Ouzel Lake, then heading up still more talus toward the saddle north of Spickard. 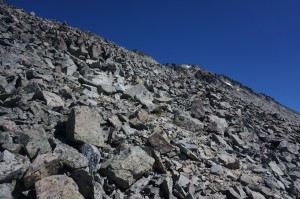 I left the talus gully below the saddle, climbing heather slopes to the snow and talus of Spickard’s west bowl. I had not paid much attention to the guidebook after noting that the peak was class 3, so fortunately another party had left a good boot-pack to show me the route. The shaded snow was still hard in the morning, so I put on crampons for the climb to Spickard’s southwest ridge. From there, I stayed near the ridge on sharp, loose talus, finally climbing among a few third class ridges and gullies. 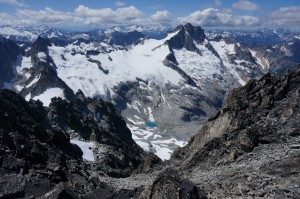 I reached the summit about 5h20 from the trailhead and, looking at the Mox Peaks and Redoubt, saw a probably-doable traverse: stay on or south of the ridge to the col east of the first Mox, gain its summit, then descend to the col between them on the standard class 4-5 route to take the standard route on the harder Mox. Then drop down to the broad snowfield/glacier northeast of the first Mox and follow that to Redoubt, finishing either via the east ridge, which is supposedly mostly class 3 with a single vertical step, or by contouring around to the standard south-side route. 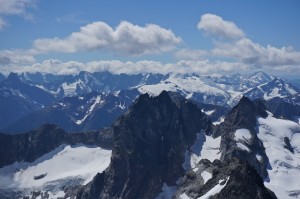 I should have done it, but felt a curious lack of motivation, and instead just daydreamed and napped on Spickard for two hours. Sitting northeast (i.e. on the glaciated side) of some of the range’s most precipitous peaks — the Mox Peaks, Redoubt, and the Pickets — Spickard may have one of the best views in the range. After admiring familiar peaks from the Pickets, to Baker, to Jack, I retraced my steps, reaching the car in around 11 hours, including the nap. If I come back this way another year, I will have to settle all Chilliwack business. 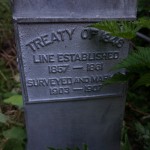 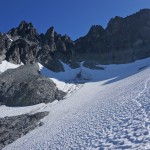 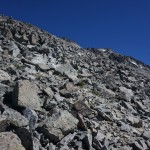 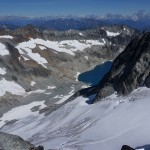 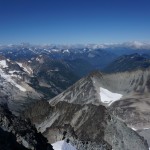 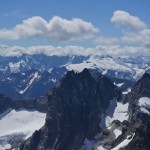 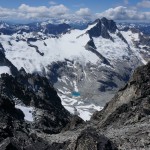 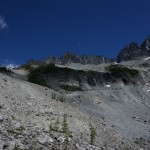 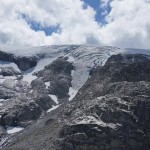 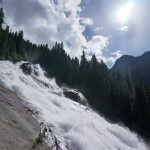 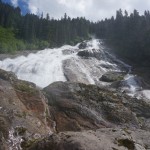 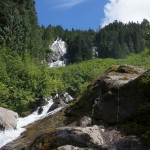 Left-hand cascade from below hand-line 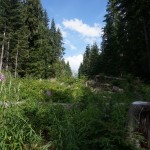 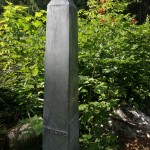