Martin is a choss-pile east of Bonanza, with little to recommend it other than its being easy to find on a cloudy, rainy, snowy day. I had intended for it to be a “bonus” peak after Bonanza, but it became my main peak thanks to uncooperative weather.

After waking up early in the long, vague northern dawn, I warmed up with some morning glop, packed my pack, and headed up the trail toward Holden Lake under partly-cloudy skies. 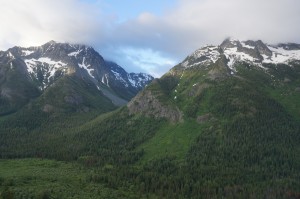 Applying the previous day’s experience, I removed my pant-legs so only my shoes and socks would be completely soaked by the underbrush lining the trail. Thankful for the well-maintained and -used trail, I climbed out of Railroad Creek’s broad U-shaped valley, then reattached my pant-legs where the pine forest suppressed the bushes.

I encountered intermittent snow below the lake, and solid snowpack around the lake itself, which was surprisingly ice-free. It was drizzling by this point, and everything more than a few hundred feet above the lake was obscured by clouds. 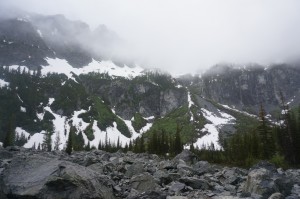 Circling around the east side of the lake to where the trail disintegrates, I spotted a large snow/talus fan leading west toward Bonanza and (presumably) the base of the Mary Green Glacier. Beckey’s guidebook states that it is possible to pass the cliffs west of the lake, and this looked like a likely path, so I hopped, shoved, and crawled my way through talus, pines, and brush to its base. 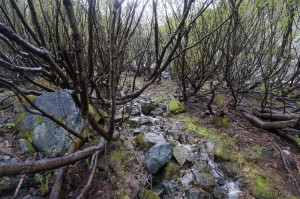 The snow covering the talus, softened by the rain, was perfect for kicking steps. Above, a bit of tunneling up a stream through alders led to some falls, passed on the right via some wet 4th class rock, and, at last, the snowfield and glacier. Thoroughly soaked but not particularly cold, I sort of enjoyed the bushwhack; consciously treating it as another kind of climbing problem rather than a frustrating waste of time helps. 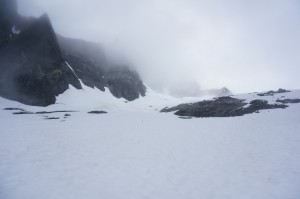 Heading west up-glacier, I knew I needed to reach a snow tongue at the upper, southwest corner, but could only see a short section of Bonanza’s southeast ridge in the clouds. I eventually climbed a snow-tongue at the upper end of what I could see, climbed some sketchy wet rock, kicked steps up more snow, and sketched my way up more wet, loose rock to a ridge. 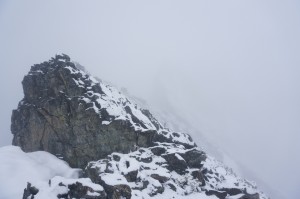 The drizzle had turned to snow, of which about a half-inch had collected on the loose talus on the other side. The route description said the summit was at the southwest end of a ridge, so I checked to the right a bit, then headed left over several bumps to one that seemed to be the end.

I found no register or cairn but, after seeing nothing higher in some brief thinnings in the clouds, decided I was at either the summit or the highest thing I would find, and returned to the glacier. In retrospect, I was actually at point 8598, a small knob at the end of Bonanza’s southeast ridge. 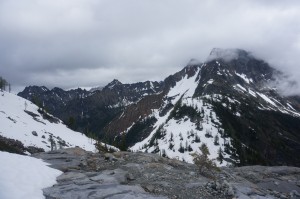 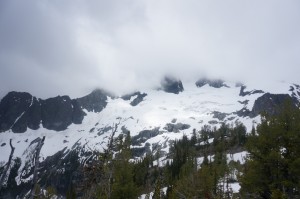 Rather than returning down the gully, I crossed northeast to “Holden Pass,” from which Martin is a scramble to the east. The ridge involved a bit of 4th class here and there, and was mostly loose but bearable. Partway up, the clouds lifted enough to make it clear that I had not summited Bonanza.

Reaching Martin’s summit, I found an 1930s register cylinder, and could actually see most of the surrounding terrain. Finding a descent east to an attractive snowfield and the Hildgard Pass trail blocked by walls of vertical choss, I returned partway down the ridge, then slid down a gully directly to Holden Lake. I jogged back to camp, found my “drying” clothes still damp, and curled back up in my tarp to figure out what to do next. 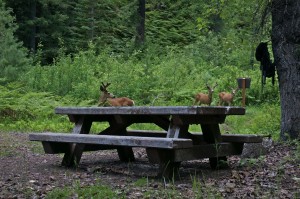 The deer around Holden, while not begging for handouts, are completely unafraid of humans, and several does, including one nursing a fawn, repeatedly passed through camp. I sat still and watched as the fawn poked insistently at the small udders tucked up between her hind legs, and she responded with quiet, cow-like noises, eventually wandering off into the brush.

Hearing something coming along the trail, I expected more deer, and instead met an older Austrian (?) woman from Holden. She was both energetic and friendly, sitting down cross-legged in the leaves to talk about Holden and the surrounding area. I mentioned that I was thinking of trying to head cross-country up Big Creek to get to Fernow without crossing the construction zone, and she replied that Big Creek was a good ski tour, but probably a rough bushwhack. Seeing my grimly, blandly utilitarian camp and cuisine, she mentioned that meals in the Holden dining hall was reasonably-priced and open to campers. As I was to learn, this woman was not just a friendly passer-by, but something like Our Lady of the Dirtbags. After her departure, I read in my damp tarp-cave until it got acceptably dark, hoping for better weather on the next day’s trip to Fernow. 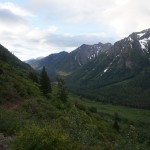 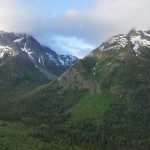 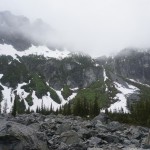 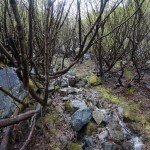 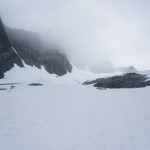 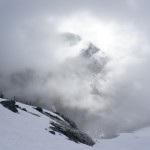 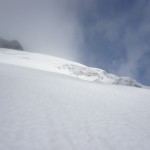 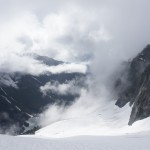 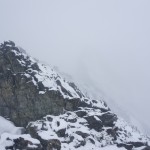 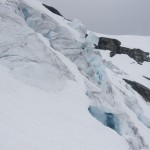 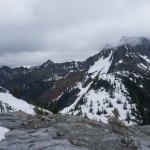 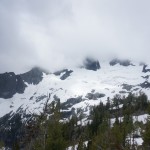 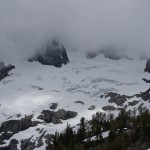 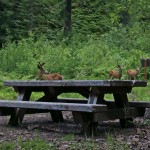