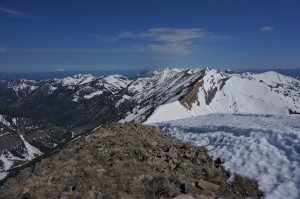 With some time to burn between Utah and the Tetons, I decided to check out the Salt River Range, parallel to the Wyoming range along Wyoming’s western border. Fitzpatrick, the highpoint, and Rock Lake Peak lie toward the southern end of the range, near the town of Afton. Fitzpatrick by itself would have been a quick day, but thanks to less-than-favorable conditions, adding Rock Lake stretched it to 9.5 hours and added significant suffering.

After camping at the well-tended Swift Creek trailhead, I got a lazy start around 6:30, long before the sun reaches this west-side valley even at this time of year. The trail was mostly clear of snow to the junction with the Rock Lake Peak Trail (yes, that’s really its name, not to be confused with, say, Rock Peak Trail Lake or Trail Peak Lake Rock).

From there, I followed bits of trail and elk tracks over a mixture of dirt, mud, and well-consolidated snow, heading south up the valley until I found a likely chute leading to Fitzpatrick. The snow in the chute was perfect for crampons or kicking steps, and only deteriorated near the summit. Leaving the summit, I found that most of the mountain consists of large and very mobile talus. Reaching the summit, I was surprised and pleased to find a register placed by the CAC, though it contained only 8 entries since being placed in 2009. On a range highpoint not far from a trail, I would expect more.

Since the slopes to either side of the ridge were either unconsolidated slush or loose talus, I was forced to take the ridge over several subpeaks on the way to Rock Lake Peak. Unfortunately, the cornices had partially fallen off, so I could neither walk on dry rock nor on wind-hardened ridgetop snow. I became intimately familiar with the covered “moat” that develops between a cornice and a ridge as it begins to separate, as I repeatedly sunk waist-deep into slush or empty space transitioning between rock and snow. Vaguely threatening weather to the south added to the unpleasantness.

The weather cleared, however, and I finally reached Rock Lake around 1:30. I hung around a bit, then made a very wet glissade south, planning to pick up the other fork of the trail. After crossing a large avalanche runout plain, I found a trail sign and developed camp/corral with light-bulbs, then immediately lost the trail in the woods. I knew where I needed to go, after all, and everything was covered in snow.

Bad idea. The trail apparently stays high as the valley steepens, and I found myself bushwhacking across steep, wooded slopes in patchy snow. Seeking flatter ground, I dropped to the valley floor shortly before it narrowed to a dirt-sided “V”. At my return’s nadir, I slid slowly and inexorably down one side of this “V” into the rushing stream, then had to cross the crotch-deep water to escape up the other bank. Eventually, elk-trails led me further up that bank to the actual trail, and an easy hike/jog out. I dropped down to the river early on a side-trail to see Periodic Spring, a cold-water geyser, but unfortunately saw nothing obvious, despite its being featured in my road atlas. 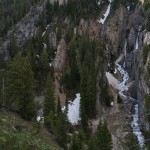 Fin and cascade along Swift Creek 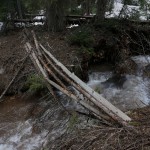 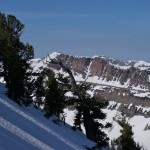 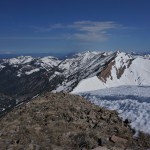 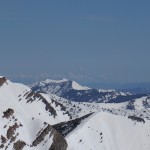 Shadowy Tetons in the distance 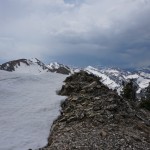 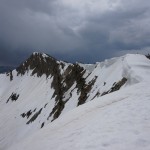 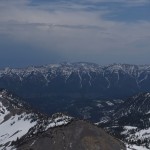 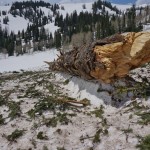 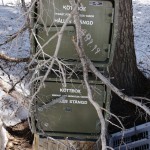