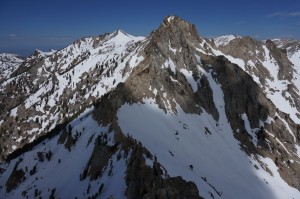 The friendly man who gave me a ride back to the car suggested Verdi’s south ridge, across Lemoille Canyon from Thomas and directly above the current end-of-road, as another good scramble. To make more of a day of it, I hiked up to the head of the canyon, climbed up a chute to the crest, and followed it all the way north to Verdi, about 5 miles in a straight line. This added a bit of sight-seeing, a lot of walking along a ridge, and a bit of sketchy scrambling over Point 10,810′, the only peak where I found a register. I don’t know a good way to reach the ridge, but I would recommend scrambling between Verdi and the saddle south of 10,810′; the rest is forgettable.

Waking up again in Lamoille Canyon, I hiked the same road, continuing to the normal parking lot at the head of the canyon. From there, I followed a maze of snowmobile tracks more or less south, aiming for a notch at that end of the valley. Even at 7:00 AM, snow catching the morning sun was becoming soft, and the tracks were a bit harder. I put on crampons and picked the shadiest, most snowmobile-trafficked line I could find, and eventually reached my target.

Not having a good map of the area, I checked if the summit to the west was anything. It wasn’t, but the higher thing to the east has a “Favre” benchmark, which shows up on the USGS 7.5′ topos. Almost all east-facing snow was wretched slush by now, so I stayed almost entirely on rock for the traverse north to Verdi, which may have made some parts considerably harder.

From Favre, I dropped down some 3rd-class rock to where the ridge leveled out, then began the long, not especially exciting, but usually-pleasant walk I had expected based on my view of the ridge the day before. A couple of the lower sections were a bit brushy, and sticking to the rocks led me into difficulties on occasion, but it was a fast walk until near Point 10,645′. I probably could have avoided it, or found a walk-up, but seeing it was made of knobby, golden “hero rock,” I had some fun taking the direct, 3rd-class way to the summit. For once, there was no cairn, but there were once again creepy swarms of ladybugs.

The ridge north starts off broad, but the crest itself narrows to fun “exposed sidewalk” sections and a bit of easy scrambling, becoming slightly more difficult near 10,811’s summit. The unexpected register held signatures from three parties over the past 24 years, an indication of the peak’s popularity.

To my surprise and dismay, things quickly got sketchy on the knife-edge ridge north of 10,811′. After some experimenting, I found a magic foot-ledge on the east side of a “beak” on the ridge, making it possible to follow the crest itself. Shortly thereafter, there was a dicey step-down-and-around onto a sloping slab, followed by an undercling and various careful adjustments to get down the slab and regain stability. Both could probably be avoided by dropping down the east side, but that was steep, hellish slush.

After these difficulties, the scramble to the saddle with Verdi was more normal 3rd class. Verdi starts with a vertical step that must be bypassed on one side to regain the ridge crest. I chose east, and found a steep sketchy mix of good golden rock, okay black, and unnervingly crumbly white. It worked, but I saw that going west would probably be easier. Once past the step, the rock improves, and the best path usually lies along the crest or to its west.

I was physically and mentally a bit worn by the time I reached Verdi, and so did not consider the additional 2-mile trek to Smith Peak. The first part of the ridge looked interesting, though. Instead, I soaked in the view for awhile, then headed down what I hoped would be a quick boot-ski to the car. Not so much: the snow was intermittent, often too soft, and broken by melted-through cascades. Getting around these was often a battle through steep tick-habitat, but I have become fairly tolerant of such things. Finally reaching the road, I was cheered to see a garter snake apparently drinking from the stream. 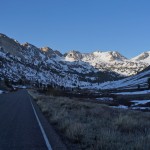 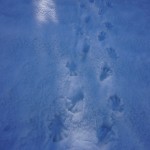 What made these tracks? 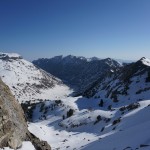 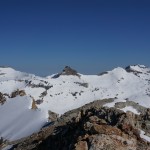 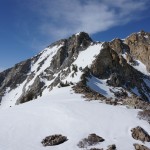 Favre from the north 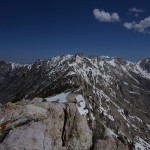 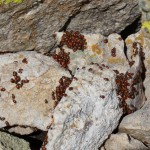 Why must they do this? 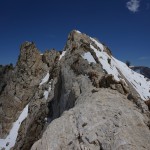 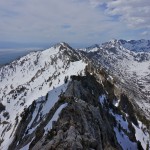 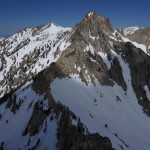 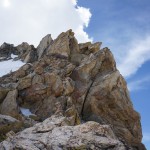 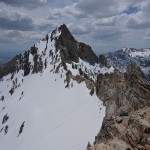 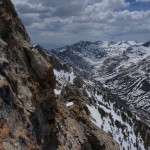 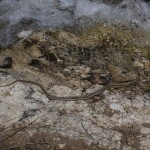